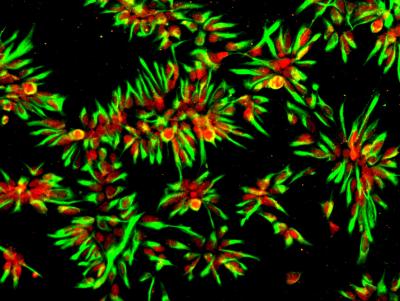 Once established such neural stem cells can be used to continuously generate neurons for drug testing and disease modeling. Depicted is an immunofluorescence staining where proteins characteristic of neural stem cells are labeled with fluorescing antibodies (Nestin in green, Dach1 in red). Credited to Jerome Mertens/University of Bonn.
Home
Featured

Researchers from the University of Bonn use reprogrammed patient neurons for drug testing.

Why do certain Alzheimer medications work in animal models but not in clinical trials in humans? A research team from the University of Bonn and the biomedical enterprise LIFE & BRAIN GmbH has been able to show that results of established test methods with animal models and cell lines used up until now can hardly be translated to the processes in the human brain. Drug testing should therefore be conducted with human nerve cells, conclude the scientists. The results are published by Cell Press in the journal Stem Cell Reports.

In the brains of Alzheimer patients, deposits form that consist essentially of beta-amyloid and are harmful to nerve cells. Scientists are therefore searching for pharmaceutical compounds that prevent the formation of these dangerous aggregates. In animal models, certain non-steroidal anti-inflammatory drugs (NSAIDs) were found to a reduced formation of harmful beta-amyloid variants. Yet, in subsequent clinical studies, these NSAIDs failed to elicit any beneficial effects.

“The reasons for these negative results have remained unclear for a long time”, says Prof. Dr. Oliver Brüstle, Director of the Institute for Reconstructive Neurobiology of the University of Bonn and CEO of LIFE & BRAIN GmbH. “Remarkably, these compounds were never tested directly on the actual target cells – the human neuron”, adds lead author Dr. Jerome Mertens of Prof. Brüstle’s team, who now works at the Laboratory of Genetics in La Jolla (USA). This is because, so far, living human neurons have been extremely difficult to obtain. However, with the recent advances in stem cell research it has become possible to derive limitless numbers of brain cells from a small skin biopsy or other adult cell types.

Now a research team from the Institute for Reconstructive Neurobiology and the Department of Neurology of the Bonn University Medical Center together with colleagues from the LIFE & BRAIN GmbH and the University of Leuven (Belgium) has obtained such nerve cells from humans. The researchers used skin cells from two patients with a familial form of Alzheimer’s Disease to produce so-called induced pluripotent stem cells (iPS cells), by reprogramming the body’s cells into a quasi-embryonic stage. They then transformed the resulting so-called “jack-of-all-trades cells” into nerve cells.

Using these human neurons, the scientists tested several compounds in the group of non-steroidal anti-inflammatory drugs. As control, the researchers used nerve cells they had obtained from iPS cells of donors who did not have the disease. Both in the nerve cells obtained from the Alzheimer patients and in the control cells, the NSAIDs that had previously tested positive in the animal models and cell lines typically used for drug screening had practically no effect: The values for the harmful beta-amyloid variants that form the feared aggregates in the brain remained unaffected when the cells were treated with clinically relevant dosages of these compounds.

“In order to predict the efficacy of Alzheimer drugs, such tests have to be performed directly on the affected human nerve cells”, concludes Prof. Brüstle’s colleague Dr. Philipp Koch, who led the study. Why do NSAIDs decrease the risk of aggregate formation in animal experiments and cell lines but not in human neurons? The scientists explain this with differences in metabolic processes between these different cell types. “The results are simply not transferable”, says Dr. Koch.

The scientists now hope that in the future, testing of potential drugs for the treatment of Alzheimer’s disease will be increasingly conducted using neurons obtained from iPS cells of patients. “The development of a single drug takes an average of ten years”, says Prof. Brüstle. “By using patient-specific nerve cells as a test system, investments by pharmaceutical companies and the tedious search for urgently needed Alzheimer medications could be greatly streamlined”.