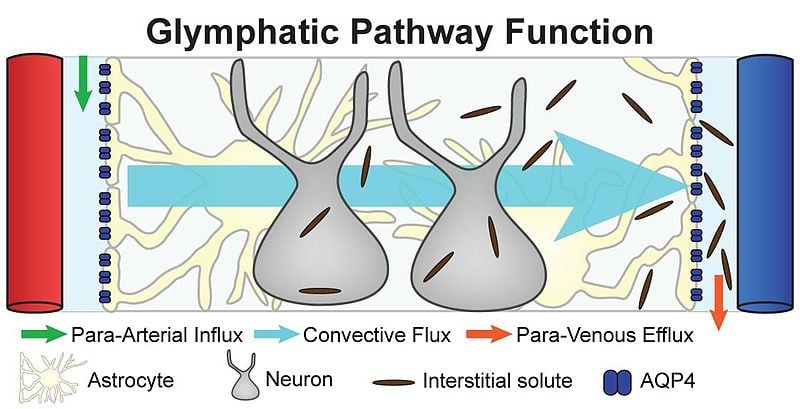 The key to discovering and understanding the glymphatic system was the advent of a new imaging technology called two-photon microscopy which enables scientists to peer deep within the living brain. This image is a schematic illustrating the anatomical components of the glymphatic clearance pathway.
Home
Featured

In a perspective piece appearing today in the journal Science, researchers at University of Rochester Medical Center (URMC) point to a newly discovered system by which the brain removes waste as a potentially powerful new tool to treat neurological disorders like Alzheimer’s disease. In fact, scientists believe that some of these conditions may arise when the system is not doing its job properly.

“Essentially all neurodegenerative diseases are associated with the accumulation of cellular waste products,” said Maiken Nedergaard, M.D., D.M.Sc., co-director of the URMC Center for Translational Neuromedicine and author of the article. “Understanding and ultimately discovering how to modulate the brain’s system for removing toxic waste could point to new ways to treat these diseases.”

The body defends the brain like a fortress and rings it with a complex system of gateways that control which molecules can enter and exit. While this “blood-brain barrier” was first described in the late 1800s, scientists are only now just beginning to understand the dynamics of how these mechanisms function. In fact, the complex network of waste removal, which researchers have dubbed the glymphatic system, was only first disclosed by URMC scientists last August in the journal Science Translational Medicine.

The removal of waste is an essential biological function and the lymphatic system – a circulatory network of organs and vessels – performs this task in most of the body. However, the lymphatic system does not extend to the brain and, consequently, researchers have never fully understood what the brain does its own waste. Some scientists have even speculated that these byproducts of cellular function where somehow being “recycled” by the brain’s cells.

One of the reasons why the glymphatic system had long eluded comprehension is that it cannot be detected in samples of brain tissue. The key to discovering and understanding the system was the advent of a new imaging technology called two-photon microscopy which enables scientists to peer deep within the living brain. Using this technology on mice, whose brains are remarkably similar to humans, Nedergaard and her colleagues were able to observe and document what amounts to an extensive, and heretofore unknown, plumbing system responsible for flushing waste from throughout the brain.

The brain is surrounded by a membrane called the arachnoid and bathed in cerebral spinal fluid (CSF). CSF flows into the interior of the brain through the same pathways as the arteries that carry blood. This parallel system is akin to a donut shaped pipe within a pipe, with the inner ring carrying blood and the outer ring carrying CSF. The CSF is draw into brain tissue via a system of conduits that are controlled by a type support cells in the brain known as glia, in this case astrocytes. The term glymphatic was coined by combining the words glia and lymphatic.

The CSF is flushed through the brain tissue at a high speed sweeping excess proteins and other waste along with it. The fluid and waste are exchanged with a similar system that parallels veins which carries the waste out of the brain and down the spine where it is eventually transferred to the lymphatic system and from there to the liver, where it is ultimately broken down.

While the discovery of the glymphatic system solved a mystery that had long baffled the scientific community, understanding how the brain removes waste – both effectively and what happens when this system breaks down – has significant implications for the treatment of neurological disorders.

Junk Food and the Brain: How Modern Diets Lacking in Micronutrients May Contribute to Angry Rhetoric

One of the hallmarks of Alzheimer’s disease is the accumulation in the brain of the protein beta amyloid. In fact, over time these proteins amass with such density that they can be observed as plaques on scans of the brain. Understanding what role the glymphatic system plays in the brain’s inability to break down and remove beta amyloid could point the way to new treatments. Specifically, whether certainly key ‘players’ in the glymphatic system, such as astrocytes, can be manipulated to ramp up the removal of waste.

“The idea that ‘dirty brain’ diseases like Alzheimer may result from a slowing down of the glymphatic system as we age is a completely new way to think about neurological disorders,” said Nedergaard. “It also presents us with a new set of targets to potentially increase the efficiency of glymphatic clearance and, ultimately, change the course of these conditions.”

Notes about this neurodegeneration and Alzheimer’s disease research