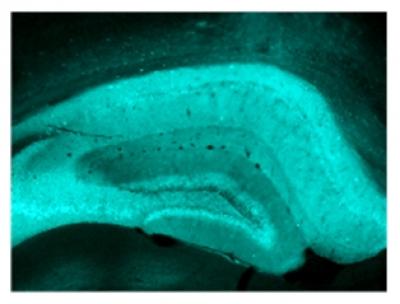 Researchers compared the behavior of CREB mutant mice to the control, wild type mice using a test where the animals were trained to eat a treat in their home cages. The mice were then moved into new cages, in order to make them anxious, and once again given treats. The time to approach the treat in the new environment was recorded. It was discovered that the animals which did not receive an antidepressant treatment took longer to venture out and retrieve the treat than those given the drugs. Additionally, in the CREB mutant mice, the time frame for retrieval was accelerated. This accelerated time to approach the treat in the mice on medication was accompanied by an increase in neuronal growth in the hippocampus. The image of the mouse hippocampus is credited to Julie Blendy and PhD; Brigitta Gunderson, PhD; Perelman School of Medicine, University of Pennsylvania.
Home
Featured

The reasons behind why it often takes people several weeks to feel the effect of newly prescribed antidepressants remains somewhat of a mystery – and likely, a frustration to both patients and physicians.

Julie Blendy, PhD, professor of Pharmacology, at the Perelman School of Medicine, University of Pennsylvania; Brigitta Gunderson, PhD, a former postdoctoral fellow in the Blendy lab, and colleagues, have been working to find out why and if there is anything that can be done to shorten the time in which antidepressants kick in.

“Our goal is to find ways for antidepressants to work faster,” says Blendy.

The proteins CREB and CREM are both transcription factors, which bind to specific DNA sequences to control the “reading” of genetic information from DNA to messenger RNA (mRNA). Both CREB and CREM bind to the same 8-base-pair DNA sequence in the cell nucleus. But, the comparative influence of CREM versus CREB on the action of antidepressants is a “big unknown,” says Blendy.

CREB, and CREM to some degree, has been implicated in the pathophysiology of depression, as well as in the efficacy of antidepressants. However, whenever CREB is deleted, CREM is upregulated, further complicating the story.

Their findings appear in the Journal of Neuroscience.

“This is the first demonstration of CREM within the brain playing a role in behavior, and specifically in behavioral outcomes, following antidepressant treatment,” says Blendy.

A Flood of Neurotransmitters

Antidepressants like SSRIs, NRIs, and older tricyclic drugs work by causing an immediate flood of neurotransmitters like serotonin, norepinephrine, and in some cases dopamine, into the synaptic space. However, it can take three to four weeks for patients to feel changes in mental state. Long-term behavioral effects of the drugs may take longer to manifest themselves, because of the need to activate CREB downstream targets such as BDNF and trkB, or as of yet unidentified targets, which could also be developed as new antidepressant drug targets.

The Penn team compared the behavior of the control, wild-type mice to the CREB mutant mice using a test in which the mouse is trained to eat a treat – Reese’s Pieces, to be exact – in the comfort of their home cage. The treat-loving mice are then placed in a new cage to make them anxious. They are given the treat again, and the time it takes for the mouse to approach the treat is recorded.

Animals that receive no drug treatment take a long time to venture out into the anxious environment to retrieve the treat, however, if given an antidepressant drug for at least three weeks, the time it takes a mouse to get the treat decreases significantly, from about 400 seconds to 100 seconds. In mice in which CREB is deleted or in mice in which CREM is upregulated, this reduction happens in one to two days versus the three weeks seen in wild-type mice.

No Pain, No Gain? How the Brain Chooses Between Pain and Profit

The accelerated time to approach the treat in mice on the medication was accompanied by an increase in new nerve growth in the hippocampus.

“Our results suggest that activation of CREM may provide a means to accelerate the therapeutic efficacy of current antidepressant treatment,” says Blendy. Upregulation of CREM observed after CREB deletion, appears to functionally compensate for CREB loss at a behavioral level and leads to maintained or increased expression of some CREB target genes. The researchers’ next step is to identify any unique CREM target genes in brain areas such as the hippocampus, which may lead to the development of faster-acting antidepressants.

Notes about this neuroscience and psychopharmacology research

This work was supported by National Institute of Mental Health (U01MH0723832, T32-MH14654) and the National Cooperative Drug Discovery Group for the Treatment of Mood Disorders.