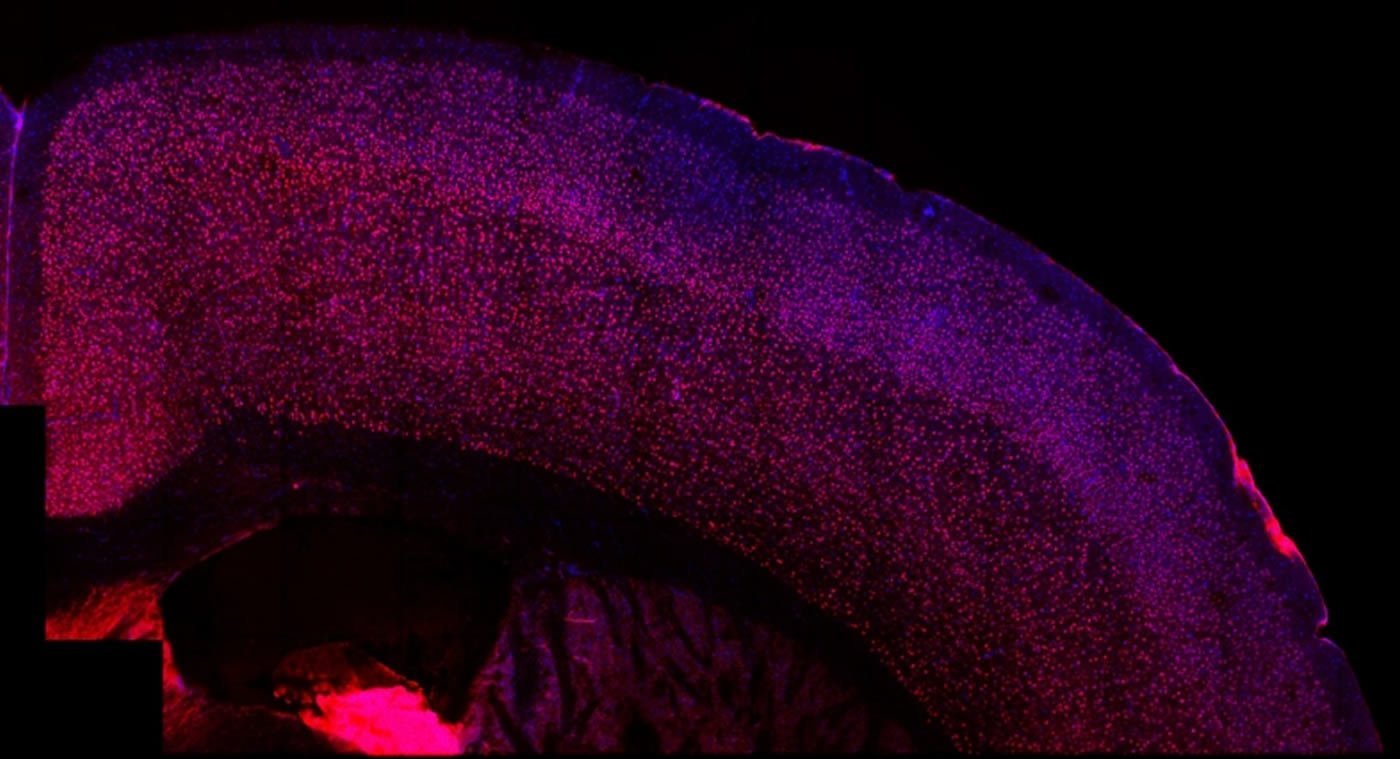 “We identified a very discrete brain region that seems to be modulating all the behaviors associated with this particular model of neurodevelopmental disorder,” says Assistant Professor Gloria Choi. In this image, an irregularity in the somatosensory cortex, called a “patch,” can be seen as a cluster of blue in the brain of a mouse born to a mother that experienced Th17 immune activation during pregnancy.NeuroscienceNews.com image is credited to The researchers.

Summary: MIT researchers report mothers who contract severe infections during pregnancy face higher autism risks in their children. However, ASD risks could be reduced by blocking the function of certain strains of bacteria found in the mother’s gut.

Mothers who experience an infection severe enough to require hospitalization during pregnancy are at higher risk of having a child with autism. Two new studies from MIT and the University of Massachusetts Medical School shed more light on this phenomenon and identify possible approaches to preventing it.

In research on mice, the researchers found that the composition of bacterial populations in the mother’s digestive tract can influence whether maternal infection leads to autistic-like behaviors in offspring. They also discovered the specific brain changes that produce these behaviors.

“We identified a very discrete brain region that seems to be modulating all the behaviors associated with this particular model of neurodevelopmental disorder,” says Gloria Choi, the Samuel A. Goldblith Career Development Assistant Professor of Brain and Cognitive Sciences and a member of MIT’s McGovern Institute for Brain Research.

If further validated in human studies, the findings could offer a possible way to reduce the risk of autism, which would involve blocking the function of certain strains of bacteria found in the maternal gut, the researchers say.

Similar effects have been described in mouse models of maternal inflammation, and in a 2016 Science paper, Choi and Huh found that a type of immune cells known as Th17 cells, and their effector molecule, called IL-17, are responsible for this effect in mice. IL-17 then interacts with receptors found on brain cells in the developing fetus, leading to irregularities that the researchers call “patches” in certain parts of the cortex.

In one of the new papers, the researchers set out to learn more about these patches and to determine if they were responsible for the behavioral abnormalities seen in those mice, which include repetitive behavior and impaired sociability.

The researchers found that the patches are most common in a part of the brain known as S1DZ. Part of the somatosensory cortex, this region is believed to be responsible for proprioception, or sensing where the body is in space. In these patches, populations of cells called interneurons, which express a protein called parvalbumin, are reduced.

Interneurons are responsible for controlling the balance of excitation and inhibition in the brain, and the researchers found that the changes they found in the cortical patches were associated with overexcitement in S1DZ.

When the researchers restored normal levels of brain activity in this area, they were able to reverse the behavioral abnormalities. They were also able to induce the behaviors in otherwise normal mice by overstimulating neurons in S1DZ.

The researchers also discovered that S1DZ sends messages to two other brain regions: the temporal association area of the cortex and the striatum. When the researchers inhibited the neurons connected to the temporal association area, they were able to reverse the sociability deficits. When they inhibited the neurons connected to the striatum, they were able to halt the repetitive behaviors.

In the second Nature paper, the researchers delved into some of the additional factors that influence whether or not a severe infection leads to autism. Not all mothers who experience severe infection end up having child with autism, and similarly not all the mice in the maternal inflammation model develop behavioral abnormalities.

“This suggests that inflammation during pregnancy is just one of the factors. It needs to work with additional factors to lead all the way to that outcome,” Choi says.

A key clue was that when immune systems in some of the pregnant mice were stimulated, they began producing IL-17 within a day. “Normally it takes three to five days, because IL-17 is produced by specialized immune cells and they require time to differentiate,” Huh says. “We thought that perhaps this cytokine is being produced not from differentiating immune cells, but rather from pre-existing immune cells.”

Previous studies in mice and humans have found populations of Th17 cells in the intestines of healthy individuals. These cells, which help to protect the host from harmful microbes, are thought to be produced after exposure to particular types of harmless bacteria that associate with the epithelium.

The researchers found that only the offspring of mice with one specific type of harmless bacteria, known as segmented filamentous bacteria, had behavioral abnormalities and cortical patches. When the researchers killed those bacteria with antibiotics, the mice produced normal offspring.

“This data strongly suggests that perhaps certain mothers who happen to carry these types of Th17 cell-inducing bacteria in their gut may be susceptible to this inflammation-induced condition,” Huh says.

Humans can also carry strains of gut bacteria known to drive production of Th17 cells, and the researchers plan to investigate whether the presence of these bacteria is associated with autism.

Sarah Gaffen, a professor of rheumatology and clinical immunology at the University of Pittsburgh, says the study clearly demonstrates the link between IL-17 and the neurological effects seen in the mice offspring. “It’s rare for things to fit into such a clear model, where you can identify a single molecule that does what you predicted,” says Gaffen, who was not involved in the study.

Funding: The research was funded by the Simons Foundation Autism Research Initiative, the Simons Center for the Social Brain at MIT, the Howard Hughes Medical Institute, Robert Buxton, the National Research Foundation of Korea, the Searle Scholars Program, a Pew Scholarship for Biomedical Sciences, the Kenneth Rainin Foundation, the National Institutes of Health, and the Hock E. Tan and K. Lisa Yang Center for Autism Research.

Viral infection during pregnancy is correlated with increased frequency of neurodevelopmental disorders, and this is studied in mice prenatally subjected to maternal immune activation (MIA). We previously showed that maternal T helper 17 cells promote the development of cortical and behavioural abnormalities in MIA-affected offspring. Here we show that cortical abnormalities are preferentially localized to a region encompassing the dysgranular zone of the primary somatosensory cortex (S1DZ). Moreover, activation of pyramidal neurons in this cortical region was sufficient to induce MIA-associated behavioural phenotypes in wild-type animals, whereas reduction in neural activity rescued the behavioural abnormalities in MIA-affected offspring. Sociability and repetitive behavioural phenotypes could be selectively modulated according to the efferent targets of S1DZ. Our work identifies a cortical region primarily, if not exclusively, centred on the S1DZ as the major node of a neural network that mediates behavioural abnormalities observed in offspring exposed to maternal inflammation.

Maternal immune activation (MIA) contributes to behavioural abnormalities associated with neurodevelopmental disorders in both primate and rodent offspring. In humans, epidemiological studies suggest that exposure of fetuses to maternal inflammation increases the likelihood of developing autism spectrum disorder. In pregnant mice, interleukin-17a (IL-17a) produced by T helper 17 (TH17) cells (CD4+ T helper effector cells involved in multiple inflammatory conditions) induces behavioural and cortical abnormalities in the offspring exposed to MIA. However, it is unclear whether other maternal factors are required to promote MIA-associated phenotypes. Moreover, the underlying mechanisms by which MIA leads to T cell activation with increased IL-17a in the maternal circulation are not well understood. Here we show that MIA phenotypes in offspring require maternal intestinal bacteria that promote TH17 cell differentiation. Pregnant mice that had been colonized with mouse commensal segmented filamentous bacteria or human commensal bacteria that induce intestinal TH17 cells were more likely to produce offspring with MIA-associated abnormalities. We also show that small intestine dendritic cells from pregnant, but not from non-pregnant, females secrete IL-1β, IL-23 and IL-6 and stimulate T cells to produce IL-17a upon exposure to MIA. Overall, our data suggest that defined gut commensal bacteria with a propensity to induce TH17 cells may increase the risk of neurodevelopmental disorders in the offspring of pregnant mothers undergoing immune system activation owing to infections or autoinflammatory syndromes.