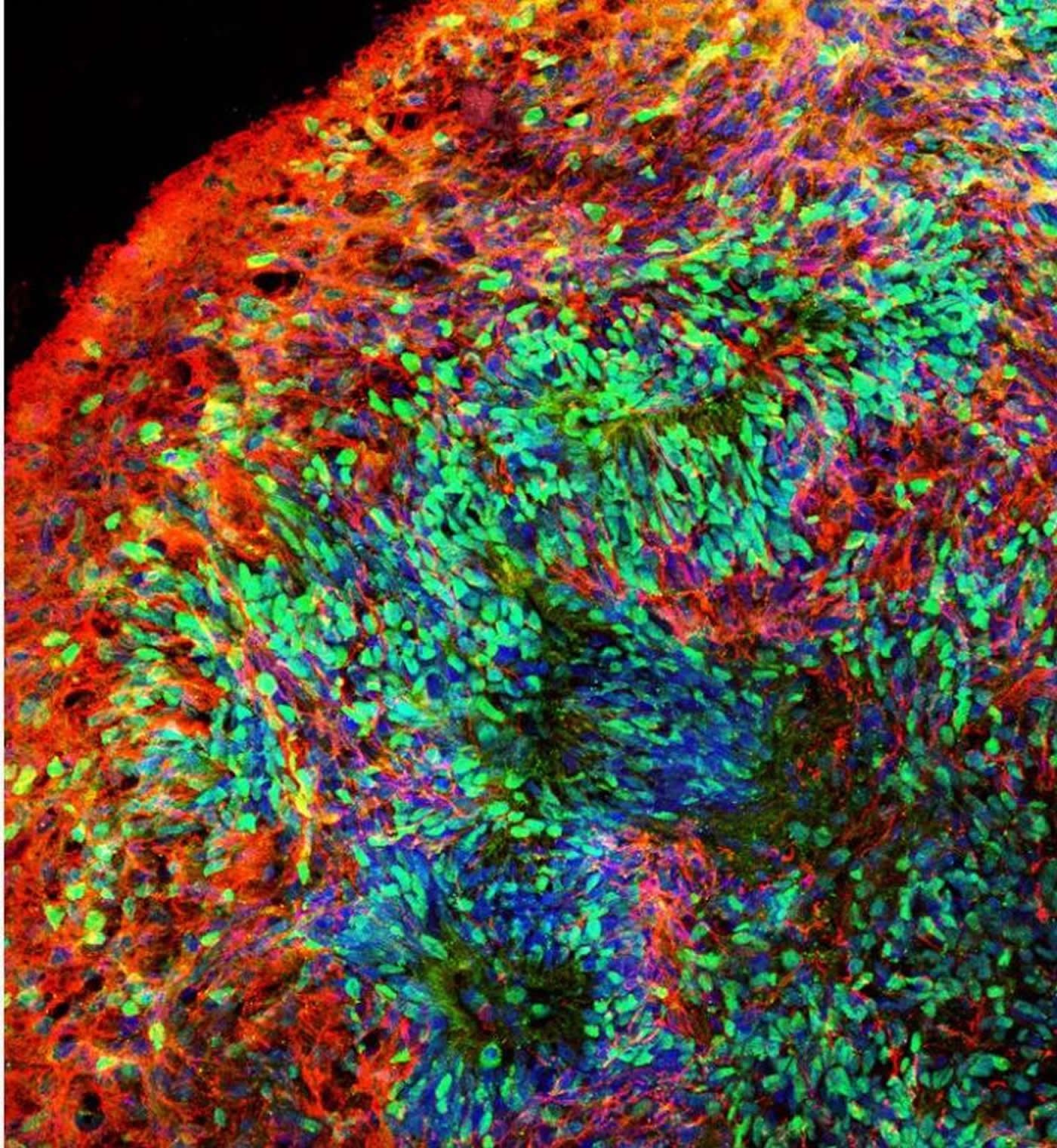 A living 3D "organoid" model of the brain generated from Down syndrome human stem cells. The image is credited to Ranjie Xu/Rutgers University-New Brunswick.

Targeting key gene could help lead to down syndrome treatment

Summary: Using stem cells from candidates with Down syndrome to create an organoid, and employing mouse models, researchers pinpoint a gene linked to memory impairments and cognitive problems in Down syndrome. Inhibiting the OLIG2 gene leads to cognitive and memory improvements in mouse models of Down. Researchers hope their findings lead to an in utero treatment that targets the gene and helps reverse abnormal brain development.

Targeting a key gene before birth could someday help lead to a treatment for Down syndrome by reversing abnormal embryonic brain development and improving cognitive function after birth, according to a Rutgers-led study.

Using stem cells that can turn into other cells in the brain, researchers developed two experimental models – a living 3D “organoid” model of the brain and a mouse brain model with implanted human cells – to investigate early brain development linked to Down syndrome, according to the study in the journal Cell Stem Cell. The study focused on human chromosome 21 gene OLIG2.

“Our results suggest the OLIG2 gene is potentially an excellent prenatal therapeutic target to reverse abnormal embryonic brain development, rebalance the two types of neurons in the brain – excitatory and inhibitory, and a healthy balance is critical – as well as improve postnatal cognitive function,” said Peng Jiang, assistant professor in the Department of Cell Biology and Neuroscience at Rutgers University-New Brunswick.

Usually, a baby is born with 46 chromosomes, but babies with Down syndrome have an extra copy of chromosome 21. That changes how a baby’s body and brain develops, which can lead to mental and physical challenges, according to the U.S. Centers for Disease Control and Prevention. Down syndrome is the most common chromosomal condition diagnosed in the United States, affecting about one in 700 babies, and about 6,000 infants are born each year with the condition.

The researchers obtained skin cells collected from Down syndrome patients and genetically reprogrammed those cells to human-induced pluripotent stem cells (hiPSCs). Resembling embryonic stem cells, the special cells can develop into many different types of cells, including brain cells, during early life and growth and are useful tools for drug development and disease modeling, according to the National Institutes of Health.

Using brain cells derived from stem cells with an extra copy of chromosome 21, the scientists developed the 3D brain organoid model, which resembles the early developing human brain. They also developed the mouse brain model, with stem cell-derived human brain cells implanted into the mouse brain within a day after the mice were born. They found that inhibitory neurons – which make your brain function smoothly – were overproduced in both models, and adult mice had impaired memory. They also found that the OLIG2 gene plays a critical role in those effects and that inhibiting it led to improvements.

The combination of the brain organoid and mouse brain model could be used to study other neurodevelopmental disorders such as autism spectrum disorder. It may also help scientists better understand the mechanisms in Alzheimer’s disease. Down syndrome patients often develop early-onset Alzheimer’s disease, Jiang noted.

The study’s lead author is Ranjie Xu, a postdoctoral researcher in Jiang’s lab. Other Rutgers co-authors include Hyosung Kim, a former post-doc in Jiang’s lab; Ronald P. Hart, a professor in the Department of Cell Biology and Neuroscience at Rutgers-New Brunswick; Zhiping P. Pang, an associate professor in the Department of Neuroscience and Cell Biology at Rutgers Robert Wood Johnson Medical School, and Jing-Jing Liu, a former post-doc in Pang’s lab. Scientists at the University of Texas Health Science Center, Kent State University, and University of Nebraska Medical Center contributed to the study.

The Effect of the Color Red on Brain Waves