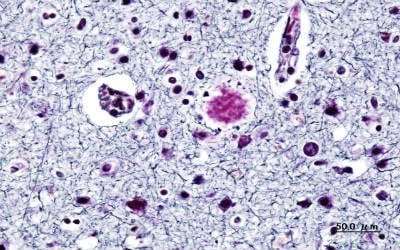 PLD3 influences processing of amyloid precursor protein which results in the generation of the characteristic amyloid plaques seen in Alzheimer's disease brain tissue, suggesting that it may be a potential therapeutic target.This is a histopathogic image of senile plaques seen in the cerebral cortex in a patient with presenile onset of Alzheimer disease. Bowdian stain. The image is for illustrative purposes only and is not connected to the research. Credit provided below.

A research team from The University of Nottingham has helped uncover a second rare genetic mutation which strongly increases the risk of Alzheimer’s disease in later life.

In an international collaboration, the University’s Translational Cell Sciences Human Genetics research group has pinpointed a rare coding variation in the Phospholipase D3 (PLD3) gene which is more common in people with late-onset Alzheimer’s than non-sufferers.

The discovery is an important milestone on the road to early diagnosis of the disease and eventual improved treatment. Having surveyed the human genome for common variants associated with Alzheimer’s, geneticists are now turning the spotlight on rare mutations which may be even stronger risk factors.

More than 820,000 people in the UK have dementia and the number is rising as the population ages. The condition, of which Alzheimer’s disease is the predominant cause, costs the UK economy £23 billion per year, much more than other diseases like cancer and heart disease.

Earlier this year the collaboration uncovered the first ever rare genetic mutation implicated in disease risk, linking the TREM2 gene to a higher risk of Alzheimer’s (published in the New England Journal of Medicine). Now, in a new study published today in the international journal, Nature, the team reveal that after analysis of the genes of around 2,000 people with Alzheimer’s, a second genetic variation has been found, in the PLD3 gene.

PLD3 influences processing of amyloid precursor protein which results in the generation of the characteristic amyloid plaques seen in AD brain tissue, suggesting that it may be a potential therapeutic target.

The international research team used Nottingham’s Alzheimer’s Research UK DNA bank, one of the largest collections of DNA from Alzheimer’s patients, to completely sequence the entire coding region (exome) of the PLD3 gene. The results showed several mutations in the gene occurred more frequently in people who had the disease than in non-sufferers. Carriers of PLD3 coding variants showed a two-fold increased risk for the disease.

“This second crucial discovery has confirmed that this latest scientific approach does deliver, it is able to find these clues. However, it is also inferring that there are lots more AD-significant variations out there and before we can use it for diagnosis we need to find all of the other genetic variations involved in Alzheimer’s too.

“Our research is forming the basis of potential diagnostics later on and more importantly it shows pathways that can be diagnostic targets which could lead to therapeutic interventions in the future.

“The next step will be to examine how this particular rare gene variant functions in the cell and see if it can be targeted, to see if there are any benefits to finding out how this gene operates in both normal and diseased cells. If we can do this, we may be able eventually to correct the defect with drug therapy. Here in Nottingham we will keep looking for more rare gene variations.

“Even if we could eventually slow or halt the progress of the disease with new drugs rather than curing it completely, the benefits would be huge in terms of the real impact on patients’ lives and also in vast savings to the health economy. The group The University of Nottingham has played a significant role in all of the recent AD genetics discoveries that have highlighted 20 new regions of interest in the genome in the last five years and we will continue to do so into the future.”

Rebecca Wood, Chief Executive of Alzheimer’s Research UK, the UK’s leading dementia research charity, said: “Advances in genetic technology are allowing researchers to understand more than ever about the genetic risk factors for the most common form of Alzheimer’s. This announcement, made just off the back of the G8 dementia research summit, is a timely reminder of the progress that can be made by worldwide collaboration. We know that late-onset Alzheimer’s is caused by a complex mix of risk factors, including both genetic and lifestyle. Understanding all of these risk factors and how they work together to affect someone’s likelihood of developing Alzheimer’s is incredibly important for developing interventions to slow the onset of the disease. Alzheimer’s Research UK is proud to have contributed to this discovery, both by funding researchers and through the establishment of a DNA collection that has been used in many of the recent genetic discoveries in Alzheimer’s.”