Dietary interventions may slow onset of inflammatory and autoimmune disorders

Summary: Reducing dietary levels of methionine can slow the onset and progression of inflammatory and autoimmune diseases, such as multiple sclerosis, in those with high-risk factors.

Significantly reducing dietary levels of the amino acid methionine could slow onset and progression of inflammatory and autoimmune disorders such as multiple sclerosis in high-risk individuals, according to findings published today in Cell Metabolism.

While many cell types in the body produce methionine, the immune cells responsible for responding to threats like pathogens do not. Instead, the methionine that fuels these specialized cells, called T cells, must be ingested through food consumption. Although methionine is found in most foods, animal products such as meat and eggs contain particularly high levels.

“Methionine is critical for a healthy immune system. Our results suggest, for people predisposed to inflammatory and autoimmune disorders like multiple sclerosis, reducing methionine intake can actually dampen the immune cells that cause disease, leading to better outcomes” said Russell Jones, Ph.D., the study’s senior author and program leader of Van Andel Institute’s Metabolic and Nutritional Programming group. “These findings provide further basis for dietary interventions as future treatments for these disorders.”

Autoimmune disorders occur when the immune system mistakenly attacks and destroys healthy tissue. For example, in multiple sclerosis — the most common inflammatory disease of the central nervous system — the myelin sheath that protects nerve cells in the brain and spinal cord is targeted by the immune system. The subsequent damage impedes messages traveling to and from the brain, resulting in progressively worsening symptoms like numbness, muscle weakness, coordination and balance problems, and cognitive decline. There currently are no treatments that significantly slow or stop multiple sclerosis without greatly increasing the risk of infection or cancer.

“What causes multiple sclerosis is still not completely understood. We know that genes related to the immune system are implicated but environmental factors also have a role to play,” said Catherine Larochelle, M.D., Ph.D., study co-author, and a clinician-scientist in neuroimmunology and neurologist at the Multiple Sclerosis Clinic at the Centre Hospitalier de l’Université de Montréal.

“The fact that metabolic factors like obesity increase the risk of developing multiple sclerosis makes the idea of dietary intervention to calm down the immune system particularly appealing.”

During an immune response, T cells flood the affected area to help the body fend off pathogens. Jones, Larochelle and their teams found dietary methionine fuels this process by helping “reprogram” T cells to respond to the threat by more quickly replicating and differentiating into specialized subtypes. Some of these reprogrammed T cells cause inflammation, which is a normal part of an immune response but can cause damage if it lingers, such as the nerve damage that occurs in multiple sclerosis. 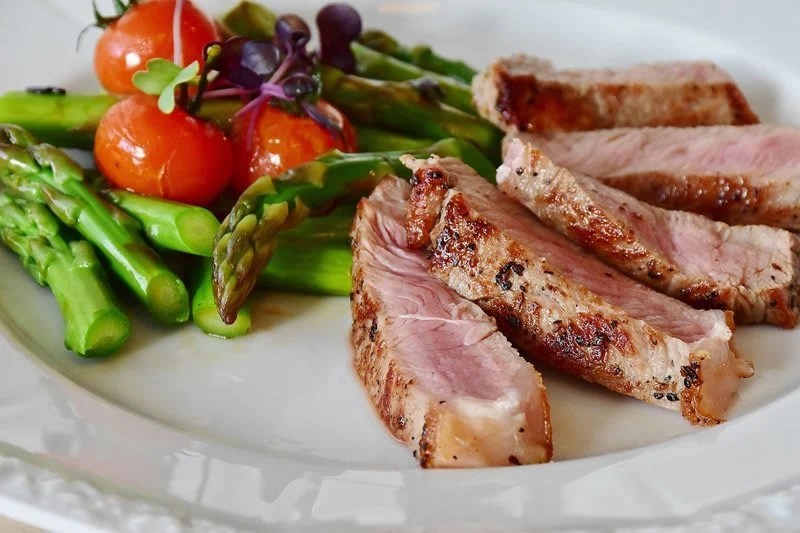 Although methionine is found in most foods, animal products such as meat and eggs contain particularly high levels. Image is in the public domain.

The researchers also found that significantly reducing methionine in the diets of mouse models of multiple sclerosis altered the reprogramming of T cells, limiting their ability to cause inflammation in the brain and spinal cord. The result was a delay in the disease’s onset and slowed progression.

“By restricting methionine in the diet, you’re essentially removing the fuel for this over-active inflammatory response without compromising the rest of the immune system,” Jones said.

He cautions that the findings must be verified in humans before dietary guidelines can be developed. The team also plans to investigate whether new medications can be designed that target methionine metabolism.

The study is the latest to spotlight methionine-restricted diets as possible treatments for disease. A 2019 study from the Locasale Lab at Duke University demonstrated that reducing methionine could improve the effects of chemotherapy and radiation in fighting cancer.

Funding: Research reported in this publication was supported by the Multiple Sclerosis Society of Canada (Larochelle) and the Canadian Institutes of Health Research under award nos. MOP-399061 (Witcher) and MOP-142259 (Jones). The content is solely the responsibility of the authors and does not necessarily represent the official views of any funding organization.