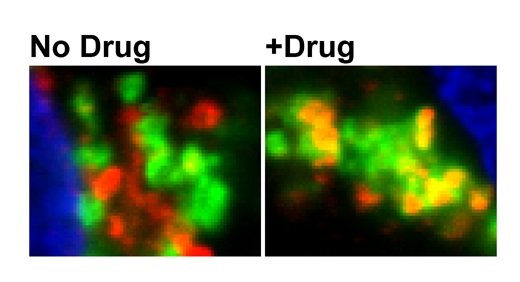 The enzyme BACE controls production of beta-amyloid, a toxic protein fragment that accumulates in the brains of people with Alzheimer's disease. Researchers have found a potential drug that can force BACE (left panel: red, right panel: orange and yellow) into a different part of the cell, diminishing its ability to produce beta-amyloid. Adapted from the Emory University press release.
Home
Featured

A straightforward drug strategy against Alzheimer’s is to turn down the brain’s production of beta-amyloid, the key component of the disease’s characteristic plaques. A toxic fragment of a protein found in healthy brains, beta-amyloid accumulates in the brains of people affected by the disease.

The enzyme that determines how much beta-amyloid brain cells generate is called BACE (beta-secretase or beta-site APP cleaving enzyme). Yet finding drugs that inhibit that elusive enzyme has been far from straightforward.

Now researchers have identified a way to shut down production of beta-amyloid by diverting BACE to a different part of the cell and inhibiting its activity. The results were published this week in Journal of Neuroscience.

“Jeremy has found a promising approach toward reducing beta-amyloid production and potentially modifying Alzheimer’s disease progression, something for which there is immense need,” says senior author James Lah, MD, PhD, associate professor of neurology at Emory University School of Medicine and director of the Cognitive Neurology program. “Drugs that reduce beta-amyloid production would probably be mostly preventive. However, since amyloid-beta is toxic, such drugs could have some immediate effect on cognitive impairment.”

In the paper, Herskowitz and his colleagues demonstrate that a specific inhibitor of the enzyme ROCK2 can cut beta-amyloid production in brain cells by more than 75 percent. Co-author Yangbo Feng, PhD, associate director of medicinal chemistry at Scripps Research Institute in Florida, previously discovered the ROCK2 inhibitor, called SR3677.

Alzheimer’s researchers were already interested in ROCK2 and a related enzyme, ROCK1, because of a connection with NSAIDs (non-steroid anti-inflammatory drugs) such as ibuprofen. Some NSAIDS can inhibit production of a particularly toxic form of beta-amyloid, and scientists believed NSAIDs were exerting their effects through the ROCKs.

Herskowitz first showed that in cultured cells, “knocking down” the ROCK2 gene reduced beta-amyloid production, but knocking down ROCK1 had the opposite effect.

“This says that anytime you’re hitting both ROCKs at once, the effects cancel each other out,” he says.

The known drugs that affect the ROCKs seemed to affect both and thus have diminished effects. In contrast, SR3677 inhibits ROCK2 much more effectively than ROCK1, and it offered a way around the obstacle. Herskowitz found that by inhibiting ROCK2, SR3677 diverts BACE to a different part of the cell, where it is less likely to act on beta-amyloid’s parent protein.

He and ADRC colleagues found that ROCK2 levels are higher than usual in tissue samples from brains of patients with Alzheimer’s, including those with mild cognitive impairment, thought to be a precursor stage of the disease.

“There is plenty of ROCK2 in the brain, and its levels are elevated in Alzheimer’s patients, indicating that it’s an excellent drug target,” Herskowitz says. “We are eager to pursue more extensive studies of this strategy in animal models of Alzheimer’s.”

Mapping the Communications Hub of the Brain

SR3677 can substantially inhibit beta-amyloid production in an animal model of Alzheimer’s, but so far, this effect has been observed when the drug is injected directly into the brain. More studies are required to learn if SR3677 or related drugs can pass the blood-brain barrier and thus be given by injection or orally, and what side effects could appear. ROCK inhibitors are also being investigated for treating other conditions such as glaucoma, hypertension and multiple sclerosis.

Notes about this Alzheimer’s disease and neurology research