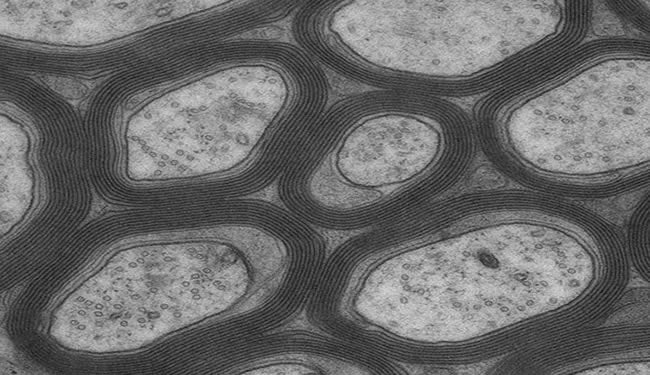 Around 100 billion neurons in the human brain enable us to think, feel and act. They transmit electrical impulses to remote parts of the brain and body via long nerve fibres known as axons. This communication requires enormous amounts of energy, which the neurons are thought to generate from sugar. Axons are closely associated with glial cells which, on the one hand, surround them with an electrically insulating myelin sheath and, on the other hand support their long-term function. Klaus Armin and his research group from the Max Planck Institute of Experimental Medicine in Göttingen have now discovered a possible mechanisms by which these glial cells in the brain can support their associated axons and keep them alive in the long term.

Oligodendrocytes are a group of highly specialised glial cells in the central nervous system. They are responsible for the formation of the fat-rich myelin sheath that surrounds the nerve fibres as an insulating layer. The comparison with the coating on electricity cables is an obvious one; however, myelin can do much more than act as the insulating layer on electricity cables: it increases the transmission speed of the axons and also reduces ongoing energy consumption. The extreme importance of myelin for a functioning nervous system is shown by the diseases that arise from a defective insulating layer, such as multiple sclerosis

Interestingly, the function of the oligodendrocytes goes far beyond the mere provision of myelin. Klaus-Armin Nave and his team at the Max Planck Institute in Göttingen already succeeded in demonstrating years ago that healthy glial cells are also essential for the long-term function and survival of the axons themselves, irrespective of myelination. “The way in which the oligodendrocytes functionally support their associated axons was not clear to us up to now,” says Nave. In a new study, the researchers were able to show that the glial cells are involved in, among other things, the replenishment of energy in the nerve fibres. “They could be described as the petrol stations on the data highway of the axons,” says Nave, explaining the results.

But how does the energy refuelling work? Is there a metabolic connection between the oligodendrocytes and axons? To find out, Ursula Fünfschilling generated genetically modified mice: the function of the mitochondria was deliberately disrupted in the oligodendrocytes through the inactivation of the Cox10 gene. This affects the final stages of sugar breakdown taking place in the mitochondria where energy is harnessed – a process known as the respiratory chain. If a link in this chain is missing, in this instance cytochrome oxidase, which is only functional when cells have the enzyme Cox10, the glial cells gradually lose the capacity for cell respiration in their mitochondria. “Without independent breathing, the manipulated glial cells of the nervous systems should have died,” explains the scientist. That is, unless the low level of energy harnessed from the splitting of the glucose to form pyruvate or milk acid, a process known as glycolysis, is sufficient for them.

And this is precisely what the scientists observed in their mice: the animals’ myelin was initially formed in the normal way. The loss of the mitochondrial respiratory chain, which started at this point, did not appear to affect the glial cells in the central nervous system. Even one year later, there were no neurodegenerative changes in the brain to be observed. The scientists assume that in the early weeks of life – a phase characterised by maximum energy requirement – the mutated oligodendrocytes still rely on many intact mitochondria. All of the more mature oligodendrocytes later appear to reduce the mitochondrial respiration and set it to energy generation through increased glycolysis. This has the advantage in healthy glial cells that the metabolic products which arise during the breaking down of glucose can be used as components for myelin synthesis. In addition, the lactic acid that arises in the oligodendrocytes can be given to the axons where it can be used to produce energy with the help of the axon’s own mitochondria.

“The complete loss of the respiratory chain in the deliberately modified oligodendrocytes probably elevates a developmental step that unfolds naturally,” explains Nave. Thus the loss of glial mitochondria does not result in the deterioration of the energy supply to the axons but, conversely, to an oversupply of exploitable lactic acid. The affected nerve pathways themselves have no problem demonstrably in metabolising the lactic acid from oligodendrocytes. Transport proteins ensure the rapid transfer of the lactic acid between the oligodendrocytes and their myelinated axons.

This finding provides a new understanding of the role of oligodendrocytes: in addition to their known significance for myelinisation [aka myelination], they can directly provide the axons with glucose products that can be used as fuel with the help of axonal mitochondria in periods of high activity. This coupling of glial cells could explain, among other things, why in many myelin diseases, for example multiple sclerosis, the affected demyelinised axons often suffer irreversible damage.