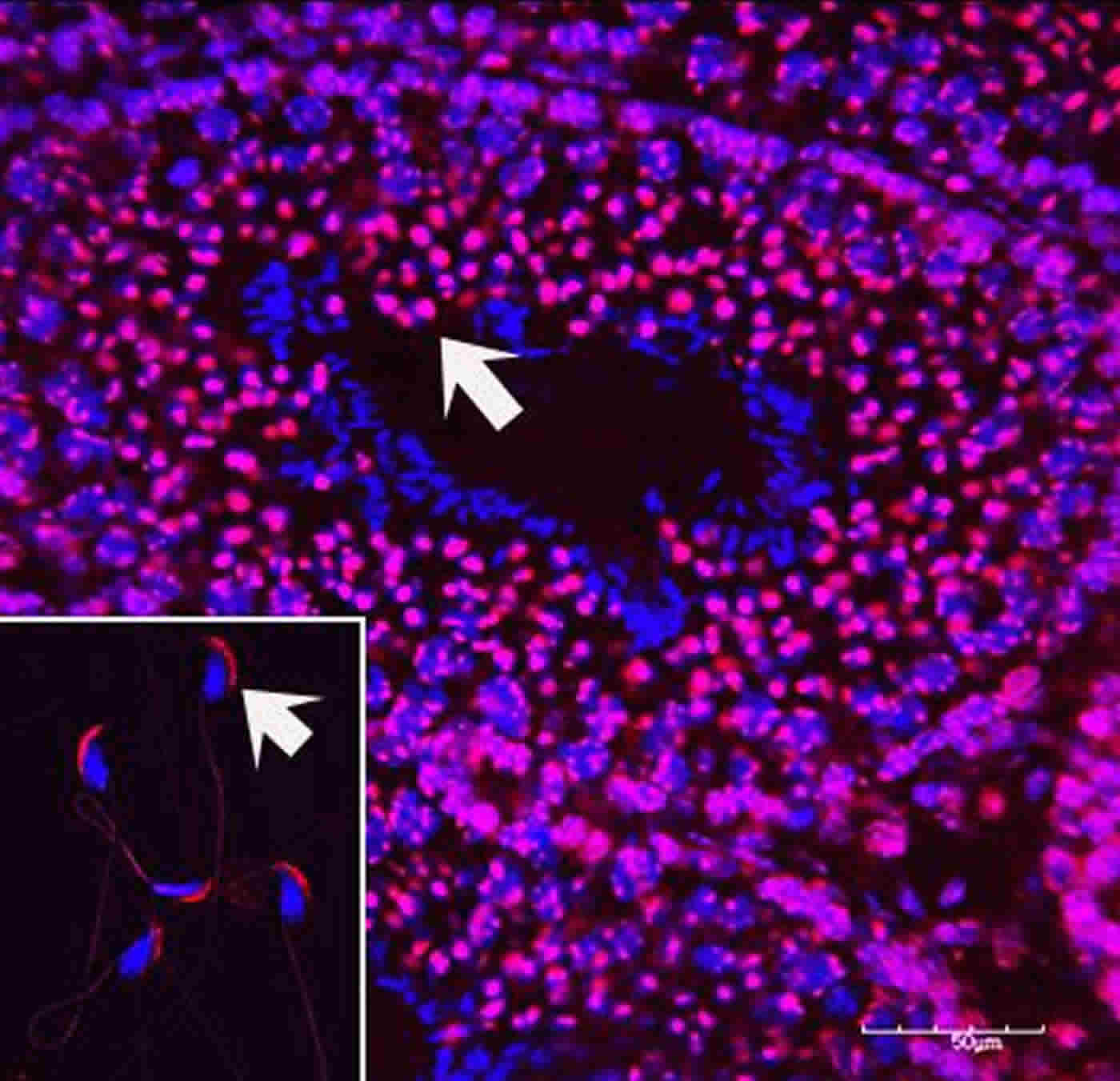 A photomicrograph of a histological section of a mouse testis processed for immunohistochemistry for methylated DNA. Spermatozoa at different stages of maturation are labeled with the methylated DNA marker (arrow). The data show that nicotine increases DNA methylation in the spermatozoa. Inset shows isolated mature spermatozoa labeled with an immunohistochemical marker for the dopamine D2 receptor (white arrow). Data show that nicotine produces significant changes in DNA methylation in the promoter region of the D2 receptor gene in the spermatozo. NeuroscienceNews.com image is credited to Pradeep G. Bhide.

Dads’ Nicotine Use May Cause Cognitive Problems for Children and Grandchildren

Summary: Researchers report a father’s exposure to nicotine may have lasting effects on the cognitive development of his offspring. The study reports nicotine exposure may cause epigenetic alterations in key genes within the father’s sperm, affecting not only his direct children but also grandchildren.

A father’s exposure to nicotine may cause cognitive deficits in his children and even grandchildren, according to a study in mice publishing on October 16 in the open-access journal PLOS Biology by Pradeep Bhide of Florida State University in Tallahassee and colleagues. The effect, which was not caused by direct secondhand exposure, may be due to epigenetic changes in key genes in the father’s sperm.

Exposure of mothers to nicotine and other components of cigarette smoke is recognized as a significant risk factor for behavioral disorders, including attention deficit hyperactivity disorder, (or ADHD) in multiple generations of descendants. Whether the same applies to fathers has been less clear, in part because in human studies it has been difficult to separate genetic factors (such as a genetic predisposition to ADHD) from environmental factors, such as direct exposure to cigarette smoke.

To overcome this difficulty, Deirdre McCarthy, Pradeep Bhide and colleagues exposed male mice to low-dose nicotine in their drinking water during the stage of life in which the mice produce sperm. They then bred these mice with females that had never been exposed to nicotine. While the fathers were behaviorally normal, both sexes of offspring displayed hyperactivity, attention deficit, and cognitive inflexibility. When female (but not male) mice from this generation were bred with nicotine-naïve mates, male offspring displayed fewer, but still significant, deficits in cognitive flexibility. Analysis of spermatozoa from the original nicotine-exposed males indicated that promoter regions of multiple genes had been epigenetically modified, including the dopamine D2 gene, critical for brain development and learning, suggesting that these modifications likely contributed to the cognitive deficits in the descendants.

Nicotine and cigarette smoke have been previously shown to cause widespread epigenetic changes, Bhide said. “The fact that men smoke more than women makes the effects in males especially important from a public health perspective. Our findings underscore the need for more research on the effects of smoking by the father, rather than just the mother, on the health of their children.”

Pretend Play Should Be Studied in Children From a Younger Age

Use of tobacco products is injurious to health in men and women. However, tobacco use by pregnant women receives greater scrutiny because it can also compromise the health of future generations. More men smoke cigarettes than women. Yet the impact of nicotine use by men upon their descendants has not been as widely scrutinized. We exposed male C57BL/6 mice to nicotine (200 μg/mL in drinking water) for 12 wk and bred the mice with drug-naïve females to produce the F1 generation. Male and female F1 mice were bred with drug-naïve partners to produce the F2 generation. We analyzed spontaneous locomotor activity, working memory, attention, and reversal learning in male and female F1 and F2 mice. Both male and female F1 mice derived from the nicotine-exposed males showed significant increases in spontaneous locomotor activity and significant deficits in reversal learning. The male F1 mice also showed significant deficits in attention, brain monoamine content, and dopamine receptor mRNA expression. Examination of the F2 generation showed that male F2 mice derived from paternally nicotine-exposed female F1 mice had significant deficits in reversal learning. Analysis of epigenetic changes in the spermatozoa of the nicotine-exposed male founders (F0) showed significant changes in global DNA methylation and DNA methylation at promoter regions of the dopamine D2 receptor gene. Our findings show that nicotine exposure of male mice produces behavioral changes in multiple generations of descendants. Nicotine-induced changes in spermatozoal DNA methylation are a plausible mechanism for the transgenerational transmission of the phenotypes. These findings underscore the need to enlarge the current focus of research and public policy targeting nicotine exposure of pregnant mothers by a more equitable focus on nicotine exposure of the mother and the father.