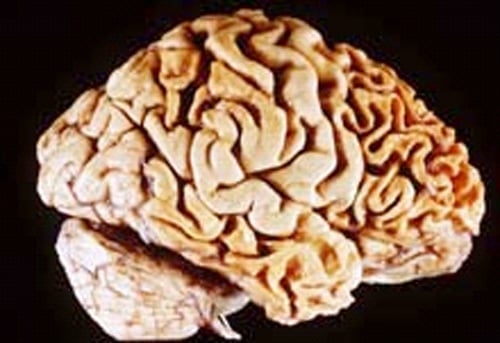 The most common known cause for both frontotemporal dementia and motor neuron disease is an unusual genetic mutation in the C9orf72 gene. This image shows frontotemporal degeneration. Credit is given below.
Home
Featured

RNA Build Up Linked to Dementia and Motor Neuron Disease

A new toxic entity associated with genetically inherited forms of dementia and motor neuron disease has been identified by scientists at the UCL Institute of Neurology. The toxin is the result of a genetic mutation that leads to the production of RNA molecules which could be responsible for the diseases. The findings are published in the journal Acta Neuropathologica.

The most common known cause for both frontotemporal dementia and motor neuron disease is an unusual genetic mutation in the C9orf72 gene. The mutation involves a small string of DNA letters at the beginning of the gene, which expand massively to produce thousands of copies.

The new research, funded by Alzheimer’s Research UK and the Medical Research Council, has shown that this DNA expansion acts in a peculiar way, leading to the generation of unexpected RNA molecules that could cause the disease.

This leads to the normal sense RNA being produced, as well as RNA in the opposite direction, termed ‘antisense RNA’. Both RNA types accumulate into aggregates in the neurons of people with frontotemporal dementia.

Intriguingly, the research showed that people with more of these aggregates in their brains developed the disease earlier than people with less RNA aggregates. This correlation suggests that the build-up may be important in causing frontotemporal dementia and motor neuron disease, making the C9orf72 DNA expansion a potential target for therapy.

Dr Adrian Isaacs, lead researcher at the UCL Institute of Neurology, said: “”These findings identify new, potentially toxic molecules in diseases caused by DNA expansions. The next steps will be to determine how they might kill neurons and how to stop them building up.”

Dr Simon Ridley, Head of Research at Alzheimer’s Research UK, the UK’s leading dementia research charity, said: “The discovery of the C9ORF72 gene was a major step forward for research into frontotemporal dementia and motor neuron disease, and it’s positive to see researchers beginning to untangle how this gene may cause these diseases in some people.

“Alzheimer’s Research UK is delighted to have supported this promising study. By unravelling some of the biological mechanisms at play, this research could take us further on the road to new treatments that are so desperately needed by the thousands of people with these devastating diseases. For these results to reach their full potential it’s vital that we continue to invest in research.”