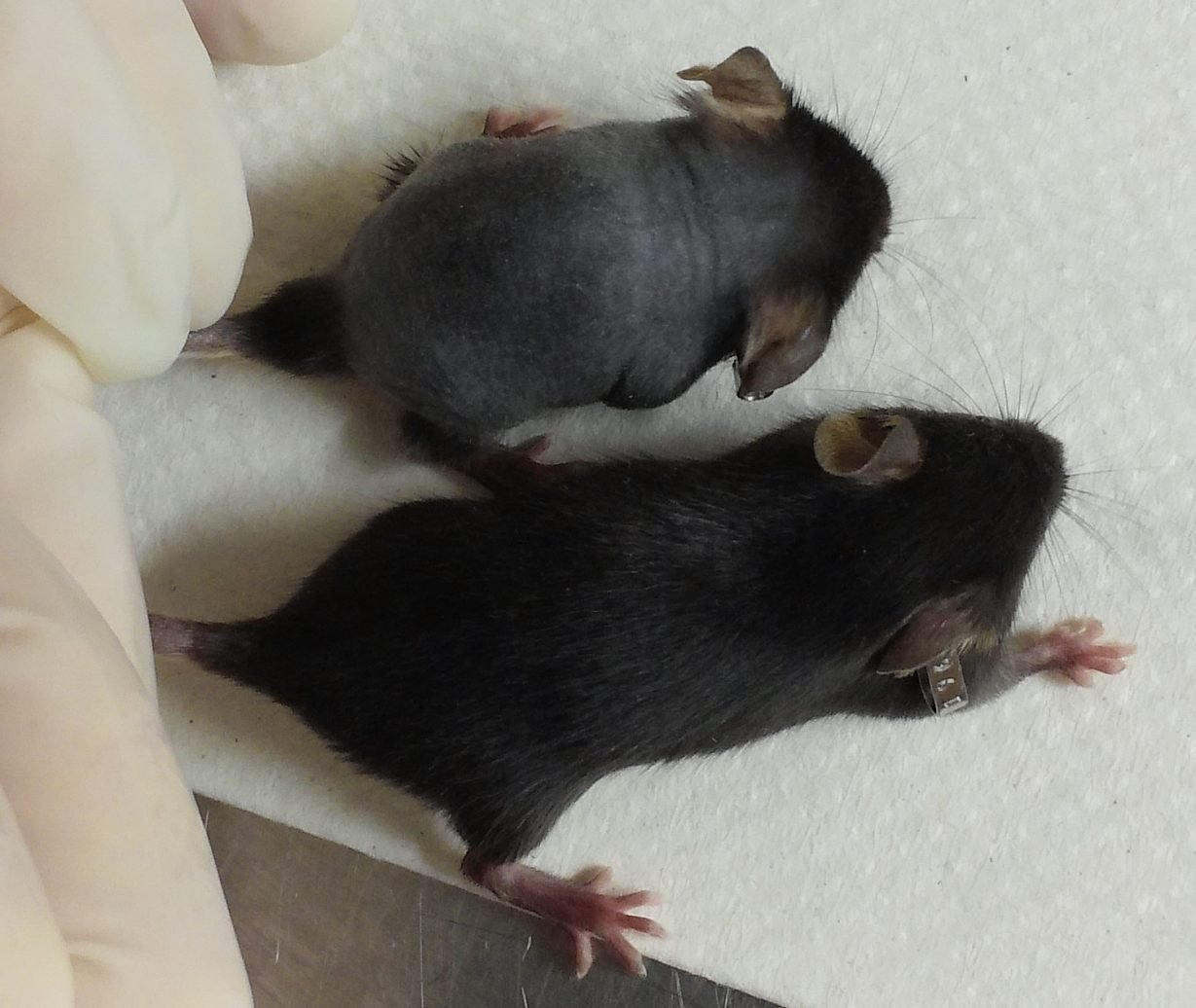 The Leigh syndrome mouse on the left shows the hair loss and short stature characteristic of the disorder. For comparison is a normal mouse on the right. Credit Melana E. Yanos/University of Washington.
Home
Featured

The transplant anti-rejection drug rapamycin showed unexpected benefits in a mouse model of a fatal defect in the energy powerhouses of cells, the mitochondria. Children with the condition, Leigh syndrome, show progressive brain damage, muscle weakness, lack of coordination or muscle control, and weight loss, and usually succumb to respiratory failure.

Leigh syndrome is often diagnosed within the first year of life. Affected children rarely survive beyond 6 or 7 years. At present, the disorder, which can result from several different underlying causes, has no effective treatment.

Reporting this week in Science Express, UW researchers said that they found that treatment with rapamycin “robustly enhances survival and attenuates disease progression in a mouse model of Leigh’s syndrome.” Given as a daily injection, the drug delayed the onset of neurological symptoms, reduced brain inflammation, and prevented brain lesions.

For most of their lives, the treated mice breathed normally, and did not clasp their legs against their bodies, a posture characteristic of this and related brain disorders in mice. Unlike the untreated mice, they could balance and run on a rotarod, a miniature log rolling exercise toy. Both the median and maximum lifespans within the group of treated mice were strikingly extended, the authors noted.

The median lifespan for this mouse condition is 50 days. In comparison, treated males lived a median of 114 days, and females 111 days. The longest survival in the treated group was 269 days, more than triple that of the untreated animals.

“We were excited at the findings because of the potential impact on treatment for kids with this or related mitochondrial diseases,” said the senior author of the study, Dr. Matt Kaeberlein, UW associate professor of pathology. “Similar intervention strategies might also prove useful for a broad range of mitochondrial diseases or for other conditions resulting from mitochondrial dysfunction.”

Mitochondrial defects lessen the amount of energy available to cells. The depletion can damage or destroy vital tissues. Symptoms and severity of illness depends on which types of cells are affected, but in many cases several organ systems operate poorly as a consequence of malfunctioning mitochondria.

Beyond specific mitochondrial diseases, most of them genetic in origin, the decline or dysfunction of mitochondria contribute to many common health problems, including some forms of heart disease, cancer, and muscle, nerve or brain degeneration associated with aging.

Kaeberlein, who researches factors that lengthen life, has been studying the anti-aging effects of rapamycin for several years. The drug, like calorie-restricting diets, acts by inhibiting mTOR, an abbreviation for the eponymously named mechanistic target of rapamycin.

Alongside their work in aging and lifespan in normal mice, Kaeberlein and his lab decided to study rapamycin’s actions on mice with a severe mitochondrial defect. The mouse model for Leigh syndrome was created in the UW laboratory of Dr. Richard Palmiter, a professor of biochemistry and Howard Hughes Medical Institute investigator who was one of the early originators of transgenic mouse models.

The research team included Dr. Philip G. Morgan and Dr. Margaret M. Sedensky, from the Department of Anesthesiology and Pain Medicine at Seattle Children’s Hospital, who study mitochondrial diseases in patients. The lead scientist was Simon C. Johnson from the UW Department of Pathology.

After seeing unexpected benefits on health and survival, the research group looked closely at the effects on metabolism by examining the levels of more than 100 different metabolites – cellular building blocks and intermediates used to make energy – in the treated and untreated Leigh syndrome mice. The team observed that treated mice appear to burn more amino acids and fats as an energy source, rather than the sugar, glucose. This eliminated the accumulation of glucose breakdown byproducts, including lactate. These byproducts can be toxic and are seen at high levels in human Leigh syndrome patients.

“The drug did not substantially alter mitochondrial composition. Instead, the mice appear to bypass the deficiency in their mitochondria through a shift in their metabolic pattern,” Kaeberlein said. “However, we can’t yet explain exactly how this rescues the mice with Leigh syndrome.”

Because this was a mouse study, evidence of efficacy of rapamycin in Leigh syndrome patients will be a necessary next step. Rapamycin already has FDA approval for several uses, including preventing organ transplant rejection and for treating rare forms of cancer; however, the drug also has side-effects which might limit its utility in very young children. Kaeberlein is optimistic, however, that “even if rapamycin doesn’t turn out to be be useful as a treatment for Leigh Syndrome, the lessons learned here will pave the way to new therapies for this devastating disease.”

Notes about this neuropharmacology and neurogenetics research

The study was funded by the UW School of Medicine and the UW Department of Pathology through the Healthy Aging and Longevity Research Institute. Some of the researchers were supported by NIH training grants T32AG000057 and T32ES007032, and an Amgen Scholar grant.