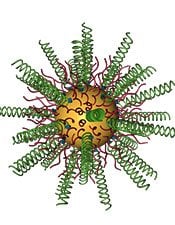 Researchers combined gold nanoparticles (in yellow) with small interfering RNAs (in green) to knock down an oncogene that is overexpressed in glioblastoma.
Home
Brain Cancer

Glioblastoma multiforme (GBM), the brain cancer that killed Sen. Edward Kennedy and kills approximately 13,000 Americans a year, is aggressive and incurable. Now a Northwestern University research team is the first to demonstrate delivery of a drug that turns off a critical gene in this complex cancer, increasing survival rates significantly in animals with the deadly disease.

The novel therapeutic, which is based on nanotechnology, is small and nimble enough to cross the blood-brain barrier and get to where it is needed — the brain tumor. Designed to target a specific cancer-causing gene in cells, the drug simply flips the switch of the troublesome oncogene to “off,” silencing the gene. This knocks out the proteins that keep cancer cells immortal.

In a study of mice, the nontoxic drug was delivered by intravenous injection. In animals with GBM, the survival rate increased nearly 20 percent, and tumor size was reduced three to four fold, as compared to the control group. The results are published today (Oct. 30) in Science Translational Medicine.

“This is a beautiful marriage of a new technology with the genes of a terrible disease,” said Chad A. Mirkin, a nanomedicine expert and a senior co-author of the study. “Using highly adaptable spherical nucleic acids, we specifically targeted a gene associated with GBM and turned it off in vivo. This proof-of-concept further establishes a broad platform for treating a wide range of diseases, from lung and colon cancers to rheumatoid arthritis and psoriasis.”

Glioblastoma expert Alexander H. Stegh came to Northwestern University in 2009, attracted by the University’s reputation for interdisciplinary research, and within weeks was paired up with Mirkin to tackle the difficult problem of developing better treatments for glioblastoma.

Help is critical for patients with GBM: The median survival rate is 14 to 16 months, and approximately 16,000 new cases are reported in the U.S. every year.

In their research partnership, Mirkin had the perfect tool to tackle the deadly cancer: spherical nucleic acids (SNAs), new globular forms of DNA and RNA, which he had invented at Northwestern in 1996, and which are nontoxic to humans. The nucleic acid sequence is designed to match the target gene.

And Stegh had the gene: In 2007, he and colleagues identified the gene Bcl2Like12 as one that is overexpressed in glioblastoma tumors and related to glioblastoma’s resistance to conventional therapies.

“My research group is working to uncover the secrets of cancer and, more importantly, how to stop it,” said Stegh, a senior co-author of the study. “Glioblastoma is a very challenging cancer, and most chemo-therapeutic drugs fail in the clinic. The beauty of the gene we silenced in this study is that it plays many different roles in therapy resistance. Taking the gene out of the picture should allow conventional therapies to be more effective.”

The power of gene regulation technology is that a disease with a genetic basis can be attacked and treated if scientists have the right tools. Thanks to the Human Genome Project and genomics research over the last two decades, there is an enormous number of genetic targets; having the right therapeutic agents and delivery materials has been the challenge.

“The RNA interfering-based SNAs are a completely novel approach in thinking about cancer therapy,” Stegh said. “One of the problems is that we have large lists of genes that are somehow disregulated in glioblastoma, but we have absolutely no way of targeting all of them using standard pharmacological approaches. That’s where we think nanomaterials can play a fundamental role in allowing us to implement the concept of personalized medicine in cancer therapy.”

Stegh and Mirkin’s drug for GBM is specially designed to target the Bcl2Like12 gene in cancer cells. Key is the nanostructure’s spherical shape and nucleic acid density. Normal (linear) nucleic acids cannot get into cells, but these spherical nucleic acids can. Small interfering RNA (siRNA) surrounds a gold nanoparticle like a shell; the nucleic acids are highly oriented, densely packed and form a tiny sphere. (The gold nanoparticle core is only 13 nanometers in diameter.) The RNA’s sequence is programmed to silence the disease-causing gene.

“The problems posed by glioblastoma and many other diseases are simply too big for one research group to handle,” said Mirkin, who also is the director of Northwestern’s International Institute for Nanotechnology. “This work highlights the power of scientists and engineers from different fields coming together to address a difficult medical issue.”

Mirkin first developed the nanostructure platform used in this study in 1996 at Northwestern, and the technology now is the basis of powerful commercialized and FDA-cleared medical diagnostic tools. This new development, however, is the first realization that the nanostructures injected into an animal naturally find their target in the brain and can deliver an effective payload of therapeutics.

The next step for the therapeutic will be to test it in clinical trials.

Little Understood Brain Region Linked to How We Perceive Pain

Notes about this brain cancer and neurogenetics research

The nanostructures used in this study were developed in Mirkin’s lab on the Evanston campus and then used in cell and animal studies in Stegh’s lab on the Chicago campus.

Northwestern has one of nine Centers of Cancer Nanotechnology Excellence (CCNE) funded by the National Cancer Institute. Mirkin and Stegh are members of both the CCNE and the Robert H. Lurie Comprehensive Cancer Center of Northwestern University.

The National Cancer Institute through its CCNE program and the Defense Advanced Research Projects Agency (DARPA) through its In Vivo Nanoplatforms program supported aspects of the research.

The title of the paper is “Spherical Nucleic Acid Nanoparticle Conjugates as an RNAi-Based Therapy for Glioblastoma.”