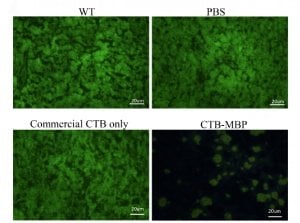 The body is structured to ensure that any invading organisms have a tough time reaching the brain, an organ obviously critical to survival. Known as the blood-brain barrier, cells that line the brain and spinal cord are tightly packed, making it difficult for anything besides very small molecules to cross from the bloodstream into the central nervous system. While beneficial, this blockade also stands in the way of delivering drugs intended to treat neurological disorders, such as Alzheimer’s.

In a new study published in the journal Molecular Therapy, University of Pennsylvania researchers have found a way of traversing the blood-brain barrier, as well as a similar physiological obstacle in the eye, the retinal-blood barrier. By pairing a receptor that targets neurons with a molecule that degrades the main component of Alzheimer’s plaques, the biologists were able to substantially dissolve these plaques in mice brains and human brain tissue, offering a potential mechanism for treating the debilitating disease, as well as other conditions that involve either the brain or the eyes.

The researchers began their work by considering how they might breach the blood-brain barrier. Daniell hypothesized that a molecule might be permitted to cross if it was attached to a carrier that is able to pass over, as a sort of molecular crossing guard. The protein cholera toxin B, or CTB, a non-toxic carrier currently approved for use in humans by the Food and Drug Administration, is used in this study to traverse the blood-brain barrier.

They next identified a protein that could clear the plaques that are found in the brains of Alzheimer’s patients. These plaques, which are believed to cause the dementia associated with the disease, are made up of tangles of amyloid beta (Aβ), a protein that is found in soluble form in healthy individuals. Noting that myelin basic protein (MBP) has been shown to degrade Aβ chains, the team decided to couple it with CTB to see if MBP would be permitted to cross.

“These tangles of beta amyloid are known to be the problem in Alzheimer’s,” says Daniell. “So our idea was to chop the protein back to their normal size so they wouldn’t form these tangles.”

To test this idea, the Penn-led team first exposed healthy mice to the CTB-MBP compound by feeding them capsules of freeze-dried leaves that had been genetically engineered to express the fused proteins, a method developed and perfected by Daniell over many years as a means of orally administering various drugs and vaccines. Adding a green-fluorescent protein to the CTB carrier, the researchers tracked the “glow” to see where the mice took up the protein. They found the glowing protein in both the brain and retina.

“When we found the glowing protein in the brain and the retina we were quite thrilled,” said Daniell. “If the protein could cross the barrier in healthy mice, we thought it was likely that it could cross in Alzheimer’s patients brains, because their barrier is somewhat impaired.”

When CTB was not part of the fused protein, they did not see this expression, suggesting that their carrier protein, the crossing guard, was an essential part of delivering their protein of interest.

To then see what MBP would do once it got to the brain, Daniell and colleagues exposed the CTB-MBP protein to the brains of mice bred to have an Alzheimer’s disease. They used a stain that binds to the brain plaques and found that exposure to the CTB-MBP compound resulted in reductions of staining up to 60 percent, indicating that the plaques were dissolving.

Gaining confidence that their compound was appropriately targeting the plaques, the researchers worked with the National Institutes of Health to obtain brain tissue from people who died of Alzheimer’s and performed the same type of staining. Their results showed a 47 percent decrease in staining in the inferior parietal cortex, a portion of the brain found to play an important role in the development of Alzheimer’s-associated dementia.

As a final step, the researchers fed the CTB-MBP-containing capsules to 15-month-old mice, the equivalent of 80 or more human years, bred to develop Alzheimer’s disease. After three months of feeding, the mice had reductions in Aβ plaques of up to 70 percent in the hippocampus and up to 40 percent in the cortex, whereas mice fed capsules that contained lettuce leaves without CTB-MBP added and mice that were not fed any capsules did not have any reduction in evidence of brain plaques.

Because Alzheimer’s patients have also been found to have plaques in their eyes, the researchers examined the eyes of the mice fed the protein. They found that, indeed, the Alzheimer’s-mice did have retinal plaques, but those fed the CBP-MBP compound had undetectable Aβ plaques in their retinae.

“Really no one knows whether the memory problems that people who have Alzheimer’s disease are due to the dementia or problems with their eyes,” Daniell said. “Here we show it may be both, and that we can dissolve the plaques through an oral route.”

Daniell hopes that this technique of delivering proteins across the blood-brain and blood-retina barriers could serve to treat a variety of diseases beyond Alzheimer’s. Several current clinical trials have failed because of an inability to deliver drugs to the brain. Currently, treatments of some eye conditions must physically penetrate the retina with an injection, an approach that requires anesthesia and risks retinal detachment. Treatment with an ingestible capsule would be safer, easier, and more cost-effective.

As a next step, Daniell hopes to collaborate with Alzheimer’s experts at Penn to advance these studies and add a behavioral component to determine whether the CBP-MBP compound not only removes plaques but also improves the memory and functioning of mice with the Alzheimer’s disease.

Notes about this Alzheimer’s disease and neurology research