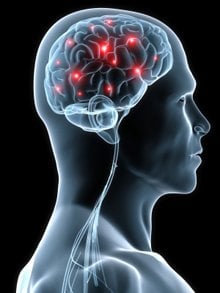 Scientists identified mitochondrial TSPO as a potential therapeutic target when mice that had symptoms of MS improved after being treated with the anti-anxiety drug etifoxine, which interacts with mitochondrial TSPO.
Home
Featured

Working with lab mice models of multiple sclerosis (MS), UC Davis scientists have detected a novel molecular target for the design of drugs that could be safer and more effective than current FDA-approved medications against MS.

The findings of the research study, published online today in the journal EMBO Molecular Medicine could have therapeutic applications for MS as well as cerebral palsy and leukodystrophies, all disorders associated with loss of white matter, which is the brain tissue that carries information between nerve cells in the brain and the spinal cord.

The target, a protein referred to as mitochondrial translocator protein (TSPO), had been previously identified but not linked to MS, an autoimmune disease that strips the protective fatty coating off nerve fibers of the brain and spinal cord. The mitrochronical TSPO is located on the outer surface of mitochondria, cellular structures that supply energy to the cells. Damage to the fatty coating, or myelin, slows the transmission of the nerve signals that enable body movement as well as sensory and cognitive functioning.

The scientists identified mitochondrial TSPO as a potential therapeutic target when mice that had symptoms of MS improved after being treated with the anti-anxiety drug etifoxine, which interacts with mitochondrial TSPO. When etifoxine, a drug clinically available in Europe, was administered to the MS mice before they had clinical signs of disease, the severity of the disease was reduced when compared to the untreated lab animals. When treated at the peak of disease severity, the animals’ MS symptoms improved.

“Etifoxine has a novel protective effect against the loss of the sheath that insulates the nerve fibers that transmit the signals from brain cells,” said Wenbin Deng, principal investigator of the study and associate professor of biochemistry and molecular medicine at UC Davis.

“Drugs designed to more precisely bind to mitochondrial TSPO may help repair the myelin sheath of MS patients and thereby even help restore the transmission of signals in the central nervous system that enable normal motor, sensory and cognitive functions,” he said.

Deng added that better treatments for MS and other demyelinating diseases are needed, especially since current FDA-approved therapies do not repair the damage of immune attacks on the myelin sheath.

The UC Davis research team hopes to further investigate the therapeutic applications of mitochondrial TSPO in drug development for MS and other autoimmune diseases. To identify more efficacious and safer drug candidates, they plan to pursue research grants that will enable them to test a variety of pharmacological compounds that bind to mitochondrial TSPO and other molecular targets in experimental models of MS and other myelin diseases.

Notes about this multiple sclerosis and neuropharmacology research

The journal paper is entitled, “A TSPO ligand is protective in a mouse model of multiple sclerosis.”

The study was in part supported by grants from the National Institutes of Health, National Multiple Sclerosis Society, Feldstein Medical Foundation and ShrinersHospitals for Children. NIH grant numbers R01 NS059043 and R01 ES015988.