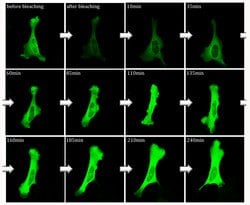 Researchers have identified a controlling element of Huntington’s disease. Amongst other things the molecular biologists looked at a special culture of cells, which produced a defective protein associated with the disease. This sequence of images shows such a cell investigated by the so-called FRAP technique (Fluorescence recovery after photobleaching). As can be seen, the defective protein (labeled by a green dye) diffuses over the entire cell body. After the first image the dye attached to proteins already present in the cell was turned-off (“bleached”). The intensity of fluorescence therefore decreased momentarily, arising again later when new proteins were synthesized. Credited to Nadine Griesche.
Home
Featured

A three molecule complex may be a target for treating Huntington’s disease, a genetic disorder affecting the brain. This finding by an international research team including scientists from the German Center for Neurodegenerative Diseases (DZNE) in Bonn and the University of Mainz was published in the journal Nature Communications. The report states that the so-called MID1 complex controls the production of a protein which damages nerve cells.

Huntington’s disease, also known as Huntington’s chorea, is a hereditary brain disease causing movement disorders and dementia. In Germany, there are about 8,000 patients affected by Huntington’s disease, with several hundred new cases arising every year. The disease usually manifests between the ages of 35 and 50. To date, it is incurable and inevitably leads to death. It is caused by a specific genetic defect: In the patient’s DNA, which is the carrier of genetic information, there are multiple copies of a certain motif. “Repeats like this are also found in healthy people. However, in cases of Huntington’s disease, these sequences are longer than usual,” explains Dr. Sybille Krauss from the DZNE in Bonn.

The long DNA sequences in Huntington’s disease lead to changes in a certain protein called “Huntingtin”. The DNA is like an archive of blueprints for proteins. Errors in the DNA therefore result in defective proteins. “Huntingtin is essential for the organism’s survival. It is a multi-talent which is important for many processes,” emphasises Krauss. “If the protein is defective, brain cells may die.“

In the spotlight: protein synthesis

In the current study, the scientists around Sybille Krauss and the Mainz-based human geneticist Susann Schweiger took a closer look at a critical stage of protein production, translation. At this step, a copy of the DNA, the so-called messenger RNA, is processed by the cell’s protein factories. In patients with Huntington’s disease, the messenger RNA contains an unusually high number of consecutive CAG sequences, CAG representing the building plan for the amino acid glutamine.

These repetitive sequences have a direct consequence: more glutamine than normal is built into Huntingtin, which is therefore defective. Sybille Krauss and her colleagues have now identified a group of three molecules, which regulate the production of this protein. “We were able to show that this complex binds to the messenger RNA and controls the synthesis of defective Huntingtin,” says Krauss. When the scientists reduced the concentration of this so-called MID1 complex in the cell, production of the defective protein declined.

“If we could find a way of influencing this complex, for example with pharmaceuticals, it is quite possible that we could directly affect the production of defective Huntingtin. This kind of treatment would not just treat the symptoms but also the causes of Huntington’s disease,” says Krauss.

The complex consists of MID1, from which it gets its name, and the proteins PP2Ac and S6K. “Every single one of these proteins is known to be important for translation. We have discovered that in the specific case of Huntington’s disease, they together bind to the CAG sequences. This was previously unknown. We also found that binding increases with repeat lengths,” says Krauss. “In sequences of normal length, we found only weak binding or none at all.”

The Bonn-based molecular biologist and her colleagues investigated the effect of the MID1 complex and the interaction between its components in a series of elaborate laboratory experiments. “This project took several years of research work,” says Krauss. Along with biochemical procedures, the scientists used cell cultures and analysed proteins from the brains of mice. The mice’s genetic code had been modified in such a way that it contained elongated CAG-repeats as it is typical for Huntington’s disease.

From previous studies it was already known that the protein MID1 tends to bind messenger RNAs. The scientists were now able to show that MID1 also attaches to messenger RNAs with excessively long CAG sequences. Furthermore, experiments showed that PP2Ac and S6K also bound the RNA in the presence of MID1. However, if the MID1 was depleted, this binding did not occur. “From this, we can conclude that these three proteins form a molecular complex, which binds to the RNA. MID1 is a key component. It actually seems to keep together its binding partners,” Krauss comments on the results of the experiments.

The researchers were also able to prove that the MID1 complex controls the translation of RNA with excessively long CAG sequences. For this, they investigated various cell cultures. The cells produced either normal Huntingtin or – due to excessively long sequences in their DNA – a defective version of this protein. The scientists reduced the occurrence of MID1 inside the cells using a procedure known as “knock-down”. The elimination of this protein, which is a major part of the MID1 complex, had direct consequences: the production of defective Huntingtin declined. “However, it did not affect the production of normal Huntingtin,” emphazises Krauss. “This further proves that the MID1 complex specifically targets RNAs with excessively long CAG sequences.”

The Bonn-based molecular biologist sees this specific influence as a chance to treat Huntington’s disease: “The MID1 complex is a promising target for therapy. It indicates a possibility to suppress the production of defective Huntingtin only, while not affecting the production of normal Huntingtin. This is of particular significance, because the normal protein is also being produced in the patients’ bodies and it is important for the organism.”

A suitable active substance has yet to be found, says Krauss. However, the next developments are in sight: “We now want to test potential substances in the laboratory,” she says.

Notes about this Huntington’s Disease research