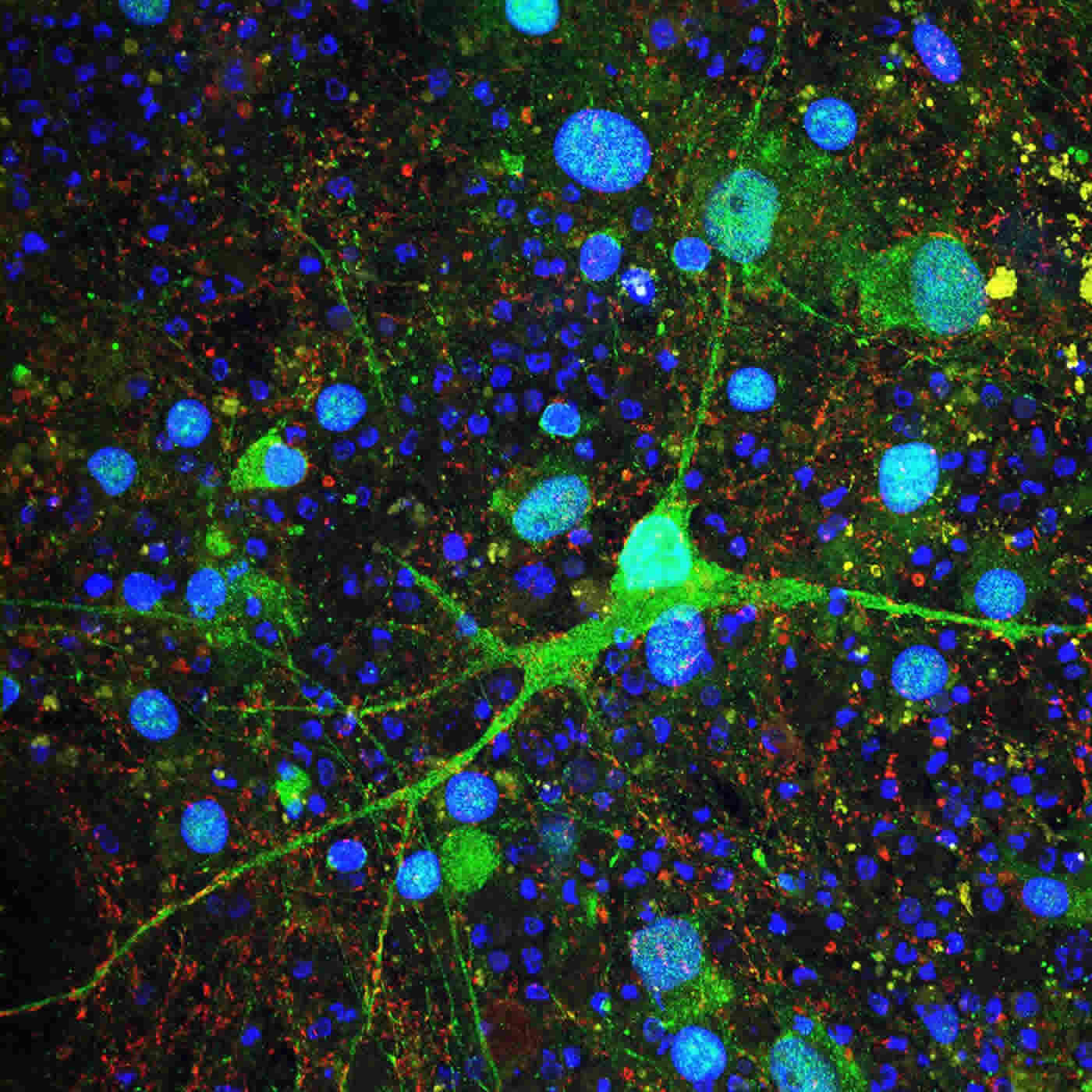 This Purkinje neuron was derived from patients with tuberous sclerosis and model properties of the disease at the cellular and molecular level. Sundberg and colleagues first created induced pluripotent stem cells (iPSCs) from patients' blood cells or skin cells, then differentiated them into neural progenitor cells and finally Purkinje cells. NeuroscienceNews.com image is credited to Maria Sundberg, PhD, Sahin Laboratory, Boston Children's Hospital.

Summary: Researchers have derived purkinje cells from patients with TSC, a genetic syndrome that includes some ASD-like symptoms. The cells, researchers say, have several characteristics that could help explain how ASD develops at the molecular level.

Increasing evidence has linked autism spectrum disorder (ASD) with dysfunction of the brain’s cerebellum, but the details have been unclear. In a new study, researchers at Boston Children’s Hospital used stem cell technology to create cerebellar cells known as Purkinje cells from patients with tuberous sclerosis complex (TSC), a genetic syndrome that often includes ASD-like features. In the lab, the cells showed several characteristics that may help explain how ASD develops at the molecular level.

The team, led by Mustafa Sahin, MD, director of the Translational Research Center at Boston Children’s, reports its findings today in the journal Molecular Psychiatry.

TSC, a rare condition in which benign tumors grow in multiple organs of the body, is associated with ASD in about half of all cases. Previous brain autopsies have shown that patients with TSC, as well as patients with ASD, have reduced numbers of Purkinje cells, the main type of neuron that communicates out of the cerebellum. In a 2012 mouse study, Sahin and colleagues knocked out a TSC gene (Tsc1) in Purkinje cells and found social deficits and repetitive behaviors in the mice, together with abnormalities in the cells.

In the new paper, Sahin and colleagues took their observations to humans, studying Purkinje cells derived from three patients with TSC (two also had ASD symptoms, and all three also had epilepsy).

To make the cells, Sundberg first created induced pluripotent stem cells from patients’ blood cells or skin cells, then differentiated these into neural progenitor cells and finally Purkinje cells. The team then compared them with Purkinje cells derived from unaffected people (parents or gender-matched controls) and with cells whose TSC mutation was corrected using CRISPR-Cas9 gene editing.

“We saw changes,” says Sahin. “The cells are bigger and fire less than control cells – exactly what we see in the mouse model.”

Purkinje cells with the TSC genetic defect were harder to differentiate from neural progenitor cells, suggesting that TSC may impair the early development of cerebellar tissue. On examination, the patient-derived Purkinje cells showed structural abnormalities in dendrites (the projections neurons use to take in signals) and signs of impaired development of synapses (junctions with other neurons).

The TSC Purkinje cells also showed over-activation of a cell growth pathway called mTOR. Accordingly, the team treated the cells with rapamycin, an mTOR inhibitor that is already used clinically in TSC to reduce the size of TSC-related tumors and prevent TSC-related seizures.

Added to patient-derived cells in culture, rapamycin enabled the development of more Purkinje precursor cells, improved the functioning of their synapses and increased their tendency to fire.

Finally, the researchers also compared what genes were being “turned on” in Purkinje cells from TSC patients versus controls. Unexpectedly, the patient-derived cells showed reduced production of FMRP, a protein that is associated with Fragile X syndrome, a common genetic cause of ASD and intellectual disability. FMRP is known to help regulate synapse function, so it may contribute to the abnormalities seen in Purkinje cell functioning in TSC.

“These conditions may have a common downstream pathway,” says Sahin.

A platform for studying autism

The study was the first to create human Purkinje cells using TSC patients’ own stem cells. In future studies, Sahin and colleagues hope to generate larger numbers of patient-derived cells to investigate differences between patients with TSC alone and those who also have ASD. Additionally, they hope to use the Purkinje cell platform to study other ASD-related genetic disorders, including Fragile X and SHANK3 mutation, and to test potential drugs. Sundberg also plans to create other types of neurons for modeling ASD.

“Looking at cell-type-specific changes is very important,” Sundberg says. “In TSC, we know that in different cell types, the mutation causes different effects.”

Accumulating evidence suggests that cerebellar dysfunction early in life is associated with autism spectrum disorder (ASD), but the molecular mechanisms underlying the cerebellar deficits at the cellular level are unclear. Tuberous sclerosis complex (TSC) is a neurocutaneous disorder that often presents with ASD. Here, we developed a cerebellar Purkinje cell (PC) model of TSC with patient-derived human induced pluripotent stem cells (hiPSCs) to characterize the molecular mechanisms underlying cerebellar abnormalities in ASD and TSC. Our results show that hiPSC-derived PCs from patients with pathogenic TSC2 mutations displayed mTORC1 pathway hyperactivation, defects in neuronal differentiation and RNA regulation, hypoexcitability and reduced synaptic activity when compared with those derived from controls. Our gene expression analyses revealed downregulation of several components of fragile X mental retardation protein (FMRP) targets in TSC2-deficient hiPSC-PCs. We detected decreased expression of FMRP, glutamate receptor δ2 (GRID2), and pre- and post-synaptic markers such as synaptophysin and PSD95 in the TSC2-deficient hiPSC-PCs. The mTOR inhibitor rapamycin rescued the deficits in differentiation, synaptic dysfunction, and hypoexcitability of TSC2 mutant hiPSC-PCs in vitro. Our findings suggest that these gene expression changes and cellular abnormalities contribute to aberrant PC function during development in TSC affected individuals.