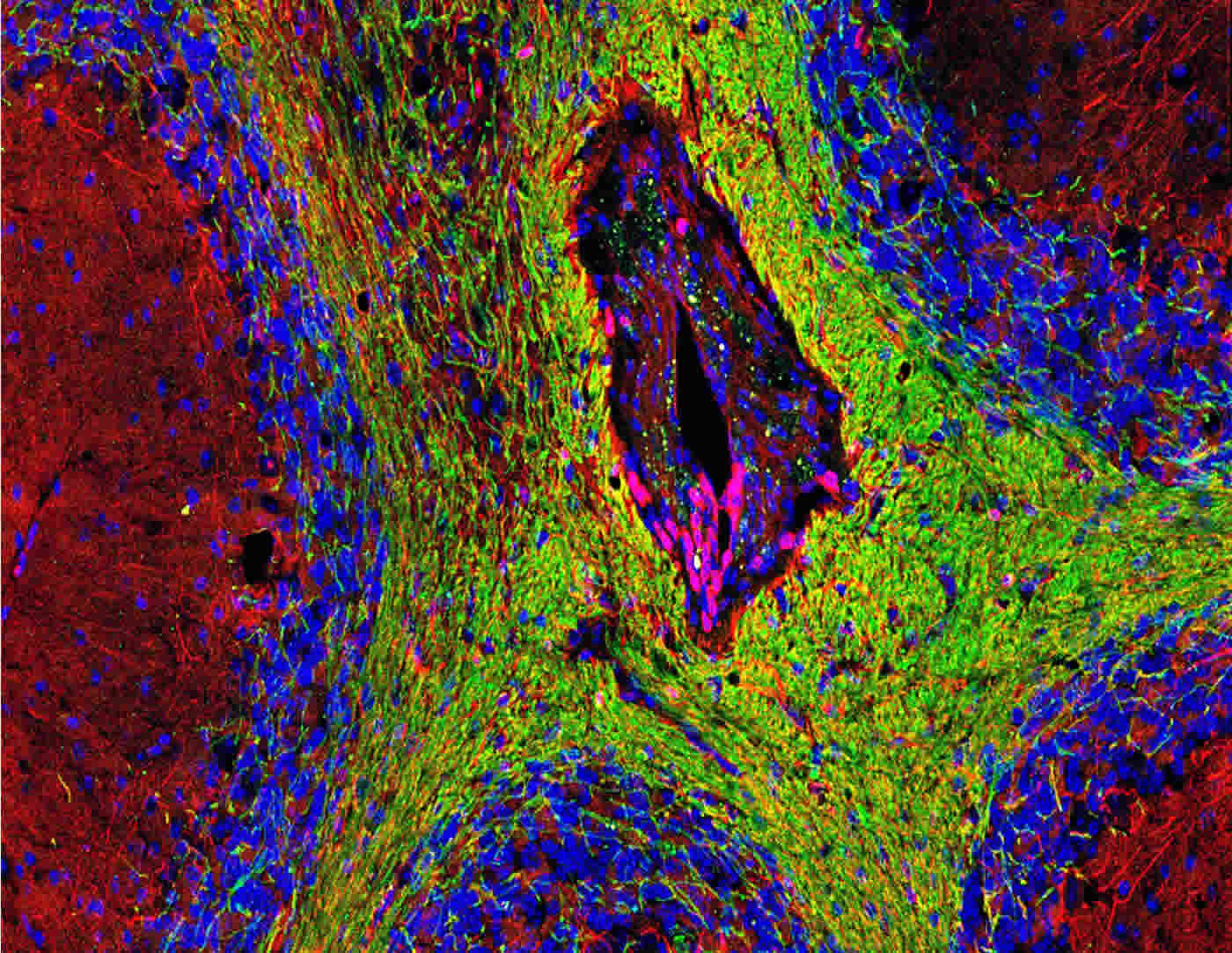 This is a photograph of de-myelinated neurons forming a dark lesion (center) in a field of otherwise healthy neurons (green). Credit: Maria Traka, University of Chicago.

New study in mice finds the death of a specific class of brain cells triggers an MS-like immune response, which can be prevented by nanoparticle therapy.

Multiple sclerosis (MS) may be triggered by the death of brain cells that make myelin, the insulation around nerve fibers, according to research on a novel mouse model developed by scientists from the University of Chicago and Northwestern Medicine. The death of these cells initiates an autoimmune response against myelin, the main characteristic of the disease, which leads to MS-like symptoms in mice.

This reaction can be prevented, however, through the application of specially developed nanoparticles, even after the loss of those brain cells. The nanoparticles are being developed for clinical trials that could lead to new treatments in humans.

The study was published in Nature Neuroscience on Dec. 14, 2015.

“Although this was a study in mice, we’ve shown for the first time one possible mechanism that can trigger MS — the death of the cells responsible for generating myelin can lead to the activation of an autoimmune response against myelin,” said study co-senior author Brian Popko, PhD, Jack Miller Professor of Neurological Disorders at the University of Chicago. “Protecting these cells in susceptible individuals might help delay or prevent MS.”

Multiple sclerosis is a neurological disease involving an abnormal immune response against myelin, which leads to the progressive deterioration of a wide range of body functions. MS is thought to affect 2.5 million people worldwide, and has unclear causes and no known cure.

To study how MS is triggered, Popko, with collaborator Stephen Miller, PhD, Judy Gugenheim Research Professor of Microbiology-Immunology at Northwestern University Feinberg School of Medicine, and their teams developed a genetically engineered mouse model that allowed them to target oligodendrocytes, the brain cells that produce myelin.

By specifically killing oligodendrocytes, the team observed MS-like symptoms that affected the ability of the mice to walk. After this initial event, the central nervous systems of the mice regenerated their myelin-producing cells, enabling them to walk again. But about six months later, the MS-like symptoms came barreling back.

“To our knowledge, this is the first evidence that oligodendrocyte death can trigger myelin autoimmunity, initiating inflammation and tissue damage in the central nervous system during MS,” said study co-author Maria Traka, PhD, research associate professor in neurology at the University of Chicago.

The mouse model also enabled the testing of new drugs against progressive MS. In the study, nanoparticles creating tolerance to the myelin antigen were administered and prevented progressive MS from developing. The nanoparticle technology was developed in Miller’s lab and has been licensed to Cour Pharmaceutical Development Company, which is developing the technology for human trials in autoimmune disease.

“We’re encouraged that the nanoparticles could stop disease progression in a model of chronic MS as efficiently as it can in progressive-remitting models of MS,” Miller said.

The timing of therapy is important, Popko pointed out.

“It’s likely that therapeutic strategies that intervene early in the disease process will have greater impact,” he said.

The current prevailing theory is that an event outside of the nervous system triggers MS in susceptible individuals who may have a genetic predisposition to the disease. In these individuals, the immune cells that normally fight infections confuse a component of the myelin sheath as foreign. These confused immune cells enter the brain and begin their mistaken attack on myelin.

But the new study demonstrates the possibility that MS can begin from the inside out, in which damage to oligodendrocytes in the central nervous system can trigger an immune response directly. Oligodendrocytes are responsible for the maintenance of myelin. If they die, the myelin sheath falls apart. The inside-out hypothesis suggests that when myelin falls apart, its components are presented to the immune system as foreign bodies or antigens. The immune system then erroneously views them as invaders and begins a full scale attack on myelin, initiating MS.

“It will be exciting to determine the nature of this process in humans–its precise role in MS and whether therapies to prevent it are effective,” Popko said.

About this neurology and multiple sclerosis research

Miller, a founder and chief of the Scientific Advisory Board of Cour Pharmaceutical, does not receive financial compensation from the company.