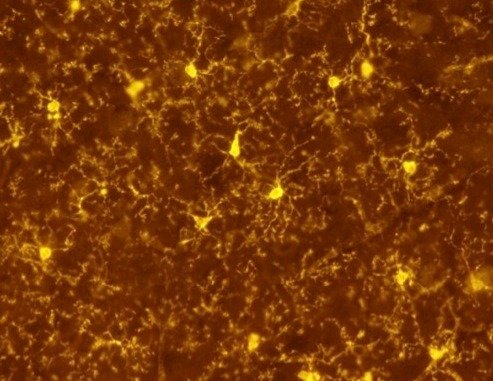 Mysterious brain cells called microglia are starting to reveal their secrets thanks to research conducted at the Weizmann Institute of Science.

Until recently, most of the glory in brain research went to neurons. For more than a century, these electrically excitable cells were believed to perform the entirety of the information processing that makes the brain such an amazing machine. In contrast, cells called glia – which together account for about half of the brain’s volume – were thought to be mere fillers that provided the neurons with support and protection but performed no vital function of their own. In fact, they had been named glia, the Greek for “glue,” precisely because they were considered so unsophisticated.

But in the past few years, the glia cells – particularly the tiny microglia that make up about one-tenth of the brain cells – have been shown to play critical roles both in the healthy and in the diseased brain.

The octopi-like microglia are immune cells that conduct ongoing surveillance, swallowing cellular debris or, in the case of infection, microbes, to protect the brain from injury or disease. But these remarkable cells are more than cleaners: In the past few years, they have been found to be involved in shaping neuronal networks by pruning excessive synapses – the contact points that allow neurons to transmit signals – during embryonic development. They are probably also involved in reshaping the synapses as learning and memory occurs in the adult brain. Defects in microglia are believed to contribute to various neurological diseases, among them Alzheimer’s disease and amyotrophic lateral sclerosis, or ALS. By clarifying how exactly the microglia operate on the molecular level, scientists might be able to develop new therapies for these disorders.

More than a decade ago, Weizmann Institute’s Prof. Steffen Jung developed a transgenic mouse model that for the first time enabled scientists to visualize the highly active microglia in the live brain. Now Jung has made a crucial next step: His laboratory developed a system for investigating the functions of microglia.

The scientists have equipped mice with a genetic switch: an enzyme that can rearrange previously marked portions of the DNA. The switch is activated by a drug: When the mouse receives the drug, the enzyme performs a genetic manipulation – for example, to disable a particular gene. The switch is so designed that over the long term, it targets only the microglia, but not other cells in the brain or in the rest of the organism. In this manner, researchers can clarify not only the function of the microglia, but the roles of different genes in their mechanism of action.

As reported in Nature Neuroscience, Weizmann scientists, in collaboration with the team of Prof. Marco Prinz at the University of Freiburg, Germany, recently used this system to examine the role of an inflammatory gene expressed by the microglia. They found that the microglia contribute to an animal disease equivalent of multiple sclerosis. Prof. Jung’s team included Yochai Wolf, Diana Varol and Dr. Simon Yona, all of Weizmann’s Immunology Department.

The system developed at the Weizmann Institute, currently applied in numerous other studies by researchers at Weizmann and elsewhere, promises to shed new light on the role of the microglia in the healthy brain as well as in Alzheimer’s, ALS and various other diseases.