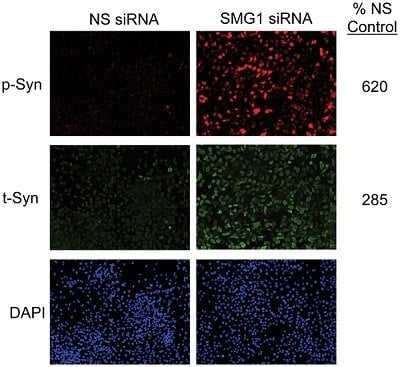 SMG1 siRNA causes a large increase in both total α-synuclein (t-syn) and pS129 phosphorylated α-synuclein (p-syn).Shown are results from the siRNA screen for one of the four significant SMG1 siRNAs. p-syn is shown in red and t-syn in green. The level of p-syn and t-syn as a percent of expression seen in control non-silencing siRNA samples is indicated. DAPI stained nuclei, which were used to calculate cell numbers, are shown in the blue panels. Credited to Adrienne Henderson-Smith, Donald Chow, Bessie Meechoovet, Meraj Aziz, Sandra A. Jacobson, Holly A. Shill, Marwan N. Sabbagh,John N. Caviness, Charles H. Adler, Erika D. Driver-Dunckley, Thomas G. Beach, Hongwei Yin, and Travis Dunckley/PLOS ONE
Home
Featured

The absence of a protein called SMG1 could be a contributing factor in the development of Parkinson’s disease and other related neurological disorders, according to a study led by the Translational Genomics Research Institute (TGen).

The study screened 711 human kinases (key regulators of cellular functions) and 206 phosphatases (key regulators of metabolic processes) to determine which might have the greatest relationship to the aggregation of a protein known as alpha-synuclein, which has been previously implicated in Parkinson’s disease. Previous studies have shown that hyperphosphorylation of the α-synuclein protein on serine 129 is related to this aggregation.

“Identifying the kinases and phosphates that regulate this critical phosphorylation event may ultimately prove beneficial in the development of new drugs that could prevent synuclein dysfunction and toxicity in Parkinson’s disease and other synucleinopathies,” said Dr. Travis Dunckley, a TGen Assistant Professor and senior author of the study.

Synucleinopathies are neurodegenerative disorders characterized by aggregates of α-synuclein protein. They include Parkinson’s, various forms of dementia and multiple systems atrophy (MSA).

The study – SMG1 Identified as a Regulator of Parkinson’s disease-associated alpha-Synuclein Through siRNA Screening – was published today in the journal PLOS ONE.

By using the latest in genomic technologies, Dr. Dunckley and collaborators found that expression of the protein SMG1 was “significantly reduced” in tissue samples of patients with Parkinson’s and dementia.

“These results suggest that reduced SMG1 expression may be a contributor to α-synuclein pathology in these diseases,” Dr. Dunckley said.