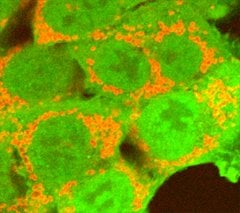 Scientists at the National Institutes of Health have used RNA interference (RNAi) technology to reveal dozens of genes which may represent new therapeutic targets for treating Parkinson’s disease. The findings also may be relevant to several diseases caused by damage to mitochondria, the biological power plants found in cells throughout the body.

“We discovered a network of genes that may regulate the disposal of dysfunctional mitochondria, opening the door to new drug targets for Parkinson’s disease and other disorders,” said Richard Youle, Ph.D., an investigator at the National Institute of Neurological Disorders and Stroke (NINDS) and a leader of the study. The findings were published online in Nature. Dr. Youle collaborated with researchers from the National Center for Advancing Translational Sciences (NCATS).

Mitochondria are tubular structures with rounded ends that use oxygen to convert many chemical fuels into adenosine triphosphate, the main energy source that powers cells. Multiple neurological disorders are linked to genes that help regulate the health of mitochondria, including Parkinson’s, and movement diseases such as Charcot-Marie Tooth Syndrome and the ataxias.

RNAi is a natural process occurring in cells that helps regulate genes. Since its discovery in 1998, scientists have used RNAi as a tool to investigate gene function and their involvement in health and disease.

Dr. Youle and his colleagues worked with Scott Martin, Ph.D., a coauthor of the paper and an NCATS researcher who is in charge of NIH’s RNAi facility. The RNAi group used robotics to introduce small interfering RNAs (siRNAs) into human cells to individually turn off nearly 22,000 genes. They then used automated microscopy to examine how silencing each gene affected the ability of parkin to tag mitochondria

“One of NCATS’ goals is to develop, leverage and improve innovative technologies, such as RNAi screening, which is used in collaborations across NIH to increase our knowledge of gene function in the context of human disease,” said Dr. Martin.

For this study, the researchers used RNAi to screen human cells to identify genes that help parkin tag damaged mitochondria. They found that at least four genes, called TOMM7, HSPAI1L, BAG4 and SIAH3, may act as helpers. Turning off some genes, such as TOMM7 and HSPAI1L, inhibited parkin tagging whereas switching off other genes, including BAG4 and SIAH3, enhanced tagging. Previous studies showed that many of the genes encode proteins that are found in mitochondria or help regulate a process called ubiquitination, which controls protein levels in cells.

Next the researchers tested one of the genes in human nerve cells. The researchers used a process called induced pluripotent stem cell technology to create the cells from human skin. Turning off the TOMM7 gene in nerve cells also appeared to inhibit tagging of mitochondria. Further experiments supported the idea that these genes may be new targets for treating neurological disorders.

“These genes work like quality control agents in a variety of cell types, including neurons,” said Dr. Youle. “The identification of these helper genes provides the research community with new information that may improve our understanding of Parkinson’s disease and other neurological disorders.”

The RNAi screening data from this study are available in NIH’s public database, PubChem, which any researcher may analyze for additional information about the role of dysfunctional mitochondria in neurological disorders.

“This study shows how the latest high-throughput genetic technologies can rapidly reveal insights into fundamental disease mechanisms,” said Story Landis, Ph.D., director of the NINDS. “We hope the results will help scientists around the world find new treatments for these devastating disorders.”

This study was funded by the NINDS’ and NCATS’ Divisions of Intramural Research.