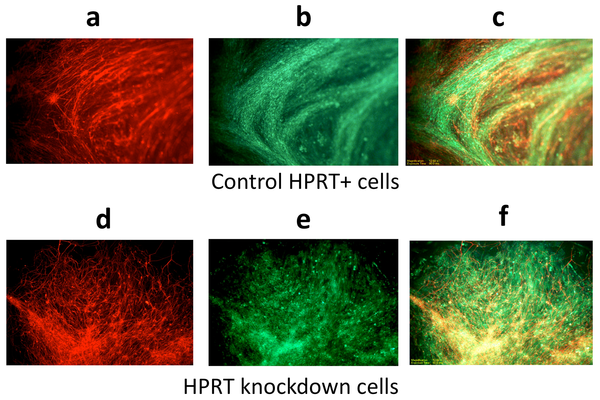 A research team, headed by Theodore Friedmann, MD, professor of pediatrics at the University of California, San Diego School of Medicine, says a gene mutation that causes a rare but devastating neurological disorder known as Lesch-Nyhan syndrome appears to offer clues to the developmental and neuronal defects found in other, diverse neurological disorders like Alzheimer’s, Parkinson’s and Huntington’s diseases.

The findings, published in the October 9, 2013 issue of the journal PLOS ONE, provide the first experimental picture of how gene expression errors impair the ability of stem cells to produce normal neurons, resulting instead in neurological disease. More broadly, they indicate that at least some distinctly different neurodevelopmental and neurodegenerative disorders share basic, causative defects.

The scientists say that understanding defects in Lesch-Nyhan could help identify errant processes in other, more common neurological disorders, perhaps pointing the way to new kinds of therapies.

Lesch-Nyhan syndrome is caused by defects in the HPRT1 gene (short for hypoxanthine guanine phosphoribosyltransferace, the enzyme it encodes), a gene that is well-known for its essential “housekeeping duties,” among them helping generate purine nucleotides – the building blocks of DNA and RNA.

Mutations in the gene result in deficiencies in the HPRT enzyme, leading to defective expression of the neurotransmitter dopamine and subsequent abnormal neuron function. HPRT mutation is known to be the specific cause of Lesch-Nyhan, an inherited neurodevelopmental disorder characterized by uncontrollable repetitive body movements, cognitive defects and compulsive self-mutilating behaviors. The disorder was first described in 1964 by medical student Michael Lesch and his mentor, William Nyhan, MD, professor emeritus at UC San Diego School of Medicine.

Using mouse embryonic stem cells modified to be HPRT-deficient, Friedmann and colleagues discovered that the cells do not develop normally. Instead, they differentiate from full-fledged neurons into cells that resemble and partially function as neurons, but also perform functions more typical of glial cells, a kind of supporting cell in the central nervous system. In addition, they noted that HPRT deficiency causes abnormal regulation of many cellular functions controlling important operational and reproduction mechanisms, DNA replication and repair and many metabolic processes.

“We believe that the neural aberrations of HPRT deficiency are the consequence of these combined, multi-system metabolic errors,” said Friedmann. “And since some of these aberrations are also found in other neurological disorders, we think they almost certainly play some role in causing the neurological abnormalities in diseases like Alzheimer’s, Parkinson’s, Huntington’s and possibly others. That makes them potential therapeutic targets for conditions that currently have limited or no treatments, let alone cures.”

The task now is to further parse and better understand the many pathways that cause abnormal brain and brain cell development, and how those pathways are also disturbed in other neurological disorders. Those defects will probably not affect HPRT directly, said Friedmann, but rather will correspond to some of the same metabolic and genetic errors that occur as a result of HPRT deficiency. Once those pathways are identified, they may become good targets for more effective forms of therapy.

Notes about this neurodegeneration and neurogenetics research

Funding for this research came, in part, from the National Institutes of Health (grant DK082840), the Lesch-Nyhan Syndrome Children’s Research Foundation, the UC San Diego Department of Pediatrics and the UC San Diego Academic Senate.