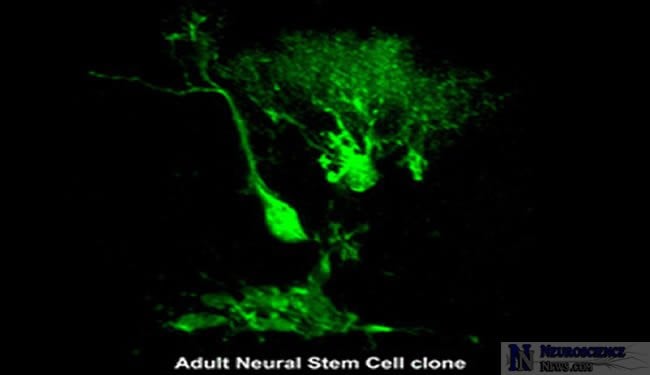 Nervous System Stem Cells Can Replace Themselves, Give Rise to Variety of Cell Types, Even Amplify

A Johns Hopkins team has discovered in young adult mice that a lone brain stem cell is capable not only of replacing itself and giving rise to specialized neurons and glia – important types of brain cells – but also of taking a wholly unexpected path: generating two new brain stem cells.

A report on their study appears June 24 in Cell.

Although it was known that the brain has the capacity to generate both neurons, which send and receive signals, and the glial cells that surround them, it was unclear whether these various cell types came from a single source. In addition to demonstrating that a single radial glia-like (RGL) brain cell is able to generate two very different functional cell types, the Hopkins researchers, by following the fates of single cells over time, found that a single brain stem cell can even produce two stem cells like itself.

“Now we know they don’t just maintain their numbers, or go down in number, but that stem cells can amplify,” says Hongjun Song, Ph.D., professor of neurology and neuroscience and director of the Stem Cell Program in the Institute for Cell Engineering, the Johns Hopkins University School of Medicine. “If we can somehow cash in on this newly discovered property of stem cells in the brain, and find ways to intervene so they divide more, then we might actually increase their numbers instead of losing them over time, which is what normally happens, perhaps due to aging or diseases.”

The researchers’ findings hinged on a decision to single out and follow lone, radial glia-like cells, instead of labeling and monitoring entire stem cell populations in the mouse brain. They took this approach because they suspected radial glia-like cells were essentially stem cells, having been shown in previous studies to give rise to neurons.

Using mice genetically modified with special genes that color-code cells for easy labeling and tracking, the Hopkins team injected a very small amount of a chemical into about 50 mouse brains to induce extremely limited cell labeling.

“It’s a simple idea that forced us to confront a lot of complex technical issues,” Song says. “With so many millions of cells in the relatively large mouse brain, labeling a single stem cell and then chasing its family history was like finding a needle in a haystack.”

The scientists developed computer programs and devised a new imaging technique that allowed them to examine stained slices of the mouse brain and, ultimately, follow single, randomly chosen radial glia-like stem cells over time. The method allowed them to track down all the new cells derived from a single original stem cell.

“We reconstituted single stem cells’ family trees to look at the progeny they gave rise to,” says Guo-li Ming, associate professor of neurology and neuroscience and a member of the Neuroregeneration Program in the Institute for Cell Engineering. “We discovered that single cells in an intact animal nervous system absolutely do exhibit stem-cell properties; they are capable of both replicating themselves and producing different types of differentiated neural progeny.”

The team followed the fates of all the marked radial glia-like stem cells for at least a month or two, and examined some a full year later to discover that even over the long term, the “mother” cell was still generating itself as well as different kinds of progeny.

In addition, the researchers investigated how these RGLs were activated on a molecular level, focusing, in particular, on the regulatory role of an autism-associated gene called PTEN. Conventional wisdom was that deleting this gene led to an increase in stem-cell activation. However, the scientists demonstrated that was a transient effect in the mouse brains, and that, ultimately, PTEN deletion leads to stem-cell depletion.

Authors of the paper, in addition to Hongjun Song and Guo-li Ming, are Michael A. Bonaguidi, Michael A. Wheeler, Jason S. Shapiro and Gerald. J. Sun, all of Johns Hopkins.