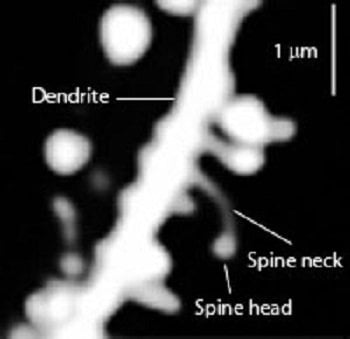 Researchers looked at behaviors of proteins involved in synaptic plasticity within dendritic spines. They discovered the induction of LTP in as few as three spines was sufficient enough to produce profound effects on the activity of proteins which control gene transcription in the cell nucleus. This illustrative image shows spines on the dendrite of a medium spiny striatal neuron. The image was obtained by expressing Enhanced Green Fluorescent Protein (EGFP) in the neurons and imaging them using a laser scanning two photon microscope.
Home
Electrophysiology

A discovery by a research team led by Ryohei Yasuda at the Max Planck Florida Institute for Neuroscience has significantly advanced basic understanding of biochemical mechanisms associated with how memories are formed.

The surprising results of the team’s research were published in the Nov. 29 editions of the research journal Science.

The research focused on the communication between synapses and the nucleus of a neuron, specifically the mechanisms by which signalling initiated at synapses is transmitted into the nucleus to induce chemical changes.

How that relates to memory formation may be better understood with some background.

More than a century ago, scientists generally recognized that the number of neurons in the adult brain did not increase significantly with age. That gave neurobiologists good reason to believe that memories were not formed by new neuron production, but rather by a strengthening of the connections between existing neurons to improve the effectiveness of their communication.

The strength of two connected neural pathways is thought to result in the storage of information. This process of synaptic strengthening is known as long-term potentiation (LTP).

LTP is one of several phenomena underlying synaptic plasticity, the ability of chemical synapses to change their strength. Memories are thought to be created, or encoded, by modifications in synaptic strength. It is known that LTP and memory formation requires gene transcription at cell nucleus.

Yasuda’s team has been looking at the behaviours of proteins involved in synaptic plasticity within dendritic spines – small bristles on the surface of neurons that receive synaptic signals. There are roughly 10,000 spines on the dendritic branches of each neuron (and roughly 100 billion neurons in the adult brain).

His team’s most surprising and unexpected finding, he said, was that induction of LTP in as few as three of these spines was sufficient to exert profound effects on activity of proteins that control gene transcription in the cell nucleus. The team also discovered that these spines needed to be distributed over at least two dendritic branches for this process to be triggered. Interestingly, efficiency of gene transcription was higher with a more geographically distributed pattern of spines.

The Science report was authored by Shenyu Zhai, Eugene D. Ark, Paula Parra-Bueno and Yasuda. Zhai and Ark are affiliated with the Department of Neurobiology at Duke University Medical Center.

Yasuda said this research project has been under way for four years. It began when he was also at Duke and was completed after he came to Max Planck. “The initial data and our unexpected finding, resulted from almost the first experiment,” he said. “But it took us nearly four years to confirm the results and understand the mechanisms involved.”

An enabling key to the research, he said, are the advancements in imaging technologies. Some of those advances, including the technology to visualize and record biochemical reactions during synaptic strengthening, were developed by Yasuda and his group. “With our imaging technology, we can directly monitor the activity of the proteins,” he said. “That is very powerful.”

Yasuda said that from here it is his hope “…to better understand the intracellular communication from spines to the nucleus. We also want to figure out how the message produced at the nucleus could in return affect the spines.”

Unravelling this signalling pathway is expected to lead to clinical applications and contribute, for example, to our understanding of how alterations in LTP may factor into a number of neurological diseases, including Parkinson’s, epilepsy and Alzheimer’s. “Understanding the mechanisms of how it works,” Yasuda said, “should provide us insights into new therapeutics for these diseases.”