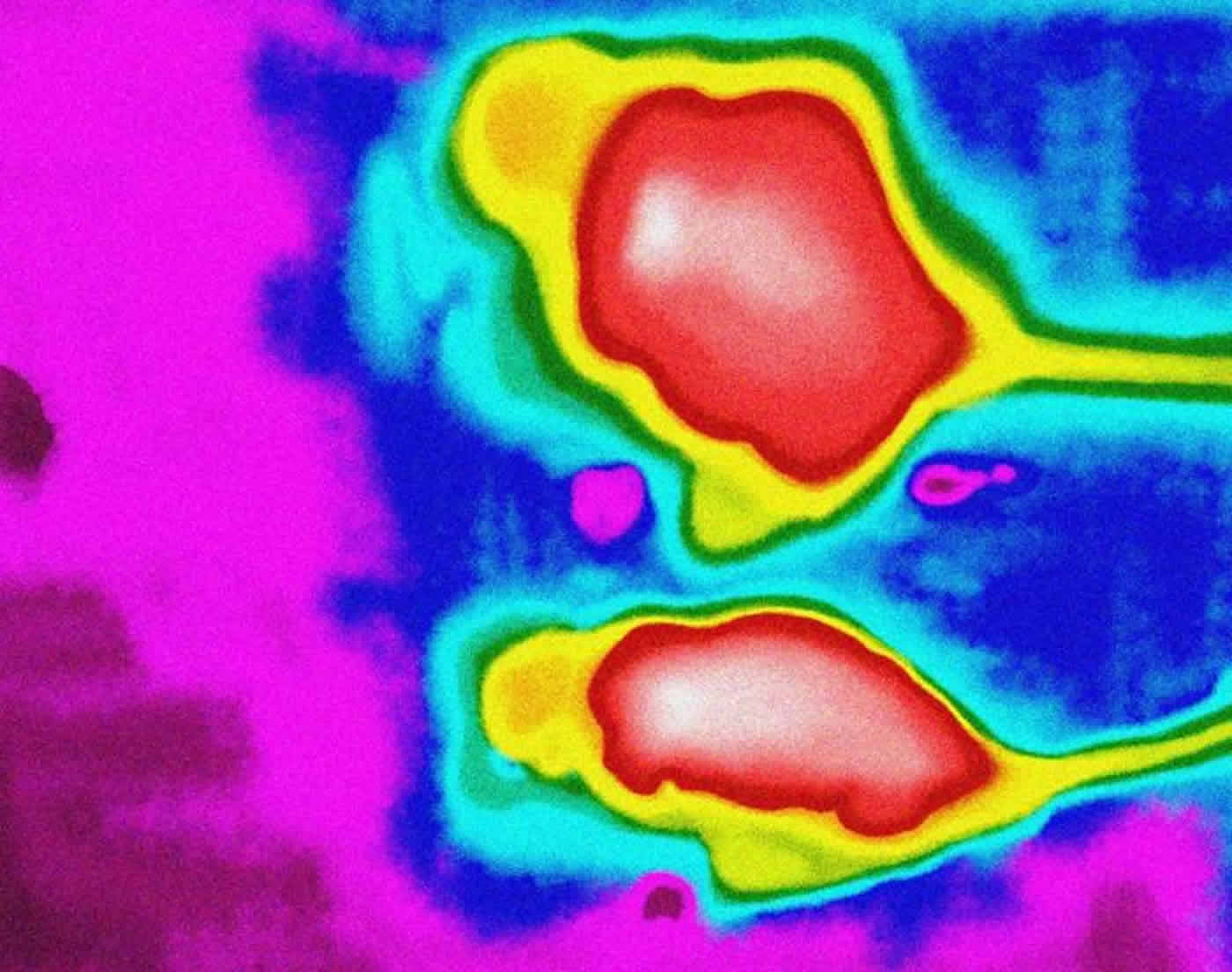 An infrared thermal image of two mouse littermates following CRISPR-mediated genome editing of leptin signaling reveals surprises. Leptin, a fat hormone identified over 20 years ago, acts in the brain to maintain body weight and blood glucose balance, preventing the development of both obesity and diabetes. NeuroscienceNews.com image is credited to Peiyuan Zhang for Tufts University.

Summary: A new gene editing study reveals how the hormone leptin can help to prevent diabetes and obesity.

Revealing surprising answers to a long-standing enigma about the brain target of the anti-obesity hormone leptin, neuroscientists at Tufts University School of Medicine have used CRISPR genome editing to identify a neural circuit in the hypothalamus as the primary mechanism in mediating leptin’s anti-obesity and anti-diabetes effects and have identified two distinct mechanisms underlying leptin’s inhibition of appetite. The research, which appears online in the journal Nature on April 18, advances efforts to find more effective therapies for obesity, type 1 and type 2 diabetes, and their complications.

Although its award-winning discovery transformed the study of obesity more than 20 years ago, leptin’s mechanisms have remained a mystery. Secreted by white fat cells, leptin acts in the brains of humans and many other animals as a satiety signal to reduce appetite and maintain stable weight and blood sugar levels. Dysregulation of leptin or its receptors results in ravenous appetite and extreme overeating (hyperphagia), obesity, and type 2 diabetes (which accounts for approximately 91% of diabetes diagnosed in adults in the U.S., affecting about 21 million people). Leptin supplements are generally ineffective for these disorders because, for unknown reasons, most obese individuals are leptin-resistant, and leptin’s clinical applications remain limited despite extensive study.

“While it’s known that leptin receptors express in many neuronal types, extensive research has largely failed to uncover either a specific group of neurons that mediates leptin’s primary effects or the molecular mechanisms involved. Whether such a specific group of neurons even exists is also controversial. Without identifying the real target that leptin works on, it is difficult to study its pathway or even effectively test any hypotheses,” said Dong Kong, Ph.D., assistant professor of neuroscience at Tufts School of Medicine and senior author on the Nature paper. “Our mechanistic study provides important insight into the biggest issues – how leptin works and how leptin resistance develops – and making leptin a more clinically usable molecule to fight both obesity and diabetes. We also hope our research strategy and genetic tools will inspire researchers in other neurobiological and metabolic areas.”

Flying in the face of prevailing views

To search for leptin’s targets in the brain, Kong and his team initiated their research based on the often overlooked finding that leptin corrects type 1 diabetes in an insulin-independent manner, thereby successfully bypassing the issue of leptin sensitivity. The Tufts researchers induced diabetes in non-obese adult mice with the drug streptozotocin (STZ), which breaks pancreatic beta cells and stops insulin and leptin production, and then extensively mapped neuronal brain activity.

“We found that AgRP [agouti-related protein-producing] neurons in the hypothalamus were extremely active in these mice, and we suspected that the STZ-induced leptin deficiency was causing this. We were excited when we successfully used leptin to inhibit the AgRP neurons and quickly reverse the diabetes,” said the paper’s co-first author Christopher Bartolome, a Ph.D. student in the neuroscience program at the Sackler School of Graduate Biomedical Sciences at Tufts where Kong is also a member of the neuroscience and the cell, molecular and developmental biology program faculties.

AgRP neurons had been proposed as a direct target for leptin by early leptin researchers. Subsequently, however, most scientists had discarded that idea because deleting leptin receptors in AgRP neurons using the popular Cre-LoxP gene editing system had failed to replicate either obesity or diabetes found in mice bred to lack leptin receptors. Kong and his team wondered if the chronic obesity and diabetes present in such mice from birth might be obscuring how leptin worked.

To confirm that leptin was indeed targeting AgRP neurons – a finding that flew in the face of prevailing views – the Tufts neuroscientists developed a new CRISPR genome editing technology that used an adeno-associated virus to carry guide RNAs to specifically delete AgRP neuron leptin receptors in young adult mice. The technology’s capacity to target adults was important because during development AgRP neurons are known to be susceptible to impacts sometimes associated with Cre-Lox gene editing, a sensitivity that might explain why past studies using Cre-LoxP techniques produced no effects on body weight.

“We found that deletion of leptin receptors in AgRP neurons induced marked obesity and diabetes and largely attenuated leptin’s anti-obesity and anti-diabetes effects. This demonstrated that AgRP neurons represent the major site in the brain to mediate leptin’s effects,” said Kong, who was an early adopter of CRISPR techniques.

The researchers not only identified AgRP as the major neuronal target of leptin in the brain and an important focus for developing obesity and diabetes treatment, but also discovered two distinct mechanisms through which leptin inhibits these neurons: One is a pre-synaptic mechanism in which neurons secreting the powerful neuroinhibitor GABA innervate AgRP neurons to mediate leptin’s acute effects on feeding, and the other is a post-synaptic mechanism in which a potassium channel sensitive to the nucleotide ATP is required for leptin to act on AgRP neurons to regulate energy balance, food intake, and blood sugar.

“These findings are very important because fully understanding the neural basis of leptin’s effects could help lead to a better understanding of the causes of obesity, leptin resistance, and, even more importantly, to the development of mechanism-based therapies,” said the paper’s co-first author Jie Xu, Ph.D., a postdoctoral scholar in the Kong laboratory.

Leptin, a hormone produced in white adipose tissue, acts in the brain to communicate fuel status, suppress appetite following a meal, promote energy expenditure and maintain blood glucose stability. Dysregulation of leptin or its receptors (LEPR) results in severe obesity and diabetes. Although intensive studies on leptin have transformed obesity and diabetes research, clinical applications of the molecule are still limited, at least in part owing to the complexity and our incomplete understanding of the underlying neural circuits. The hypothalamic neurons that express agouti-related peptide (AGRP) and pro-opiomelanocortin (POMC) have been hypothesized to be the main first-order, leptin-responsive neurons. Selective deletion of LEPR in these neurons with the Cre–loxP system, however, has previously failed to recapitulate, or only marginally recapitulated, the obesity and diabetes that are seen in LEPR-deficient Leprdb/db mice, suggesting that AGRP or POMC neurons are not directly required for the effects of leptin in vivo. The primary neural targets of leptin are therefore still unclear. Here we conduct a systematic, unbiased survey of leptin-responsive neurons in streptozotocin-induced diabetic mice and exploit CRISPR–Cas9-mediated genetic ablation of LEPR in vivo. Unexpectedly, we find that AGRP neurons but not POMC neurons are required for the primary action of leptin to regulate both energy balance and glucose homeostasis. Leptin deficiency disinhibits AGRP neurons, and chemogenetic inhibition of these neurons reverses both diabetic hyperphagia and hyperglycaemia. In sharp contrast to previous studies, we show that CRISPR-mediated deletion of LEPR in AGRP neurons causes severe obesity and diabetes, faithfully replicating the phenotype of Leprdb/db mice. We also uncover divergent mechanisms of acute and chronic inhibition of AGRP neurons by leptin (presynaptic potentiation of GABA (γ-aminobutyric acid) neurotransmission and postsynaptic activation of ATP-sensitive potassium channels, respectively). Our findings identify the underlying basis of the neurobiological effects of leptin and associated metabolic disorders.