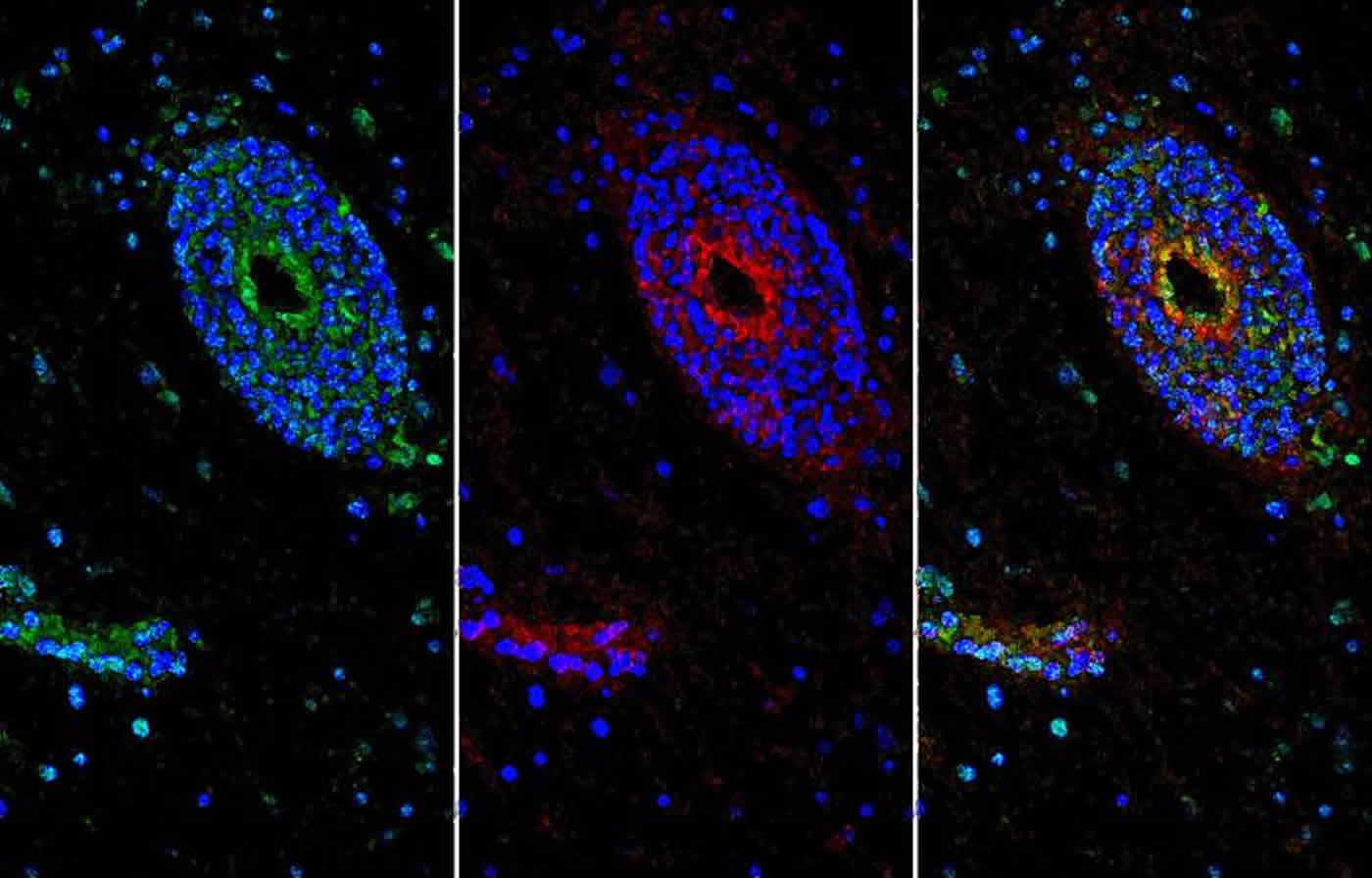 Inflammation in a multiple sclerosis lesion prompts the blood-brain barrier to enhance the expression of netrin-1 (green) to limit immune-related damage. Blood-brain barrier vessels were labeled red and cell nuclei were stained blue. Image credit: The researchers/University of Pennsylvania.

How the Blood-Brain Barrier is Maintained

The brain is a privileged organ in the body. So vital to life, the brain is protected from alterations elsewhere in the body by a highly regulated gateway known as the blood-brain barrier, which allows only selected molecules to pass through.

In certain diseases, however, such as multiple sclerosis, the barrier can be improperly breached. These “leaks” can allow immune cells and inflammatory molecules to pass through, causing inflammation that leads to neuronal damage.

In a new study, researchers have made insights into how the blood-brain barrier, or BBB, is maintained, identifying a protein key to the process. Delivering this protein to mice with the rodent equivalent of MS improved their symptoms.

Alvarez is an assistant professor in Penn’s School of Veterinary Medicine. He conducted the study with Podjaski and Prat and colleagues from McGill University and from the University of Montreal, where he completed a postdoctoral fellowship under the direction of Prat. Podjaski is currently a researcher with New Nordic Inc. Prat is a professor in the University of Montreal’s Faculty of Medicine and directs the Neuroimmunology Laboratory at the Centre Hospitalier de l’Université de Montréal Research Centre.

In 2011, Alvarez and Prat published a study in Science that showed that the protein sonic hedgehog, or Shh, is secreted by central nervous system cells called astrocytes and plays a key role in blood-brain barrier maintenance, in part by preventing immune cells from entering the brain.

But the researchers still didn’t have a complete picture of the signaling events downstream of Shh that mediated this effect. To learn more, they first used human cells in culture from the blood-brain barrier, called endothelial cells. They found that applying Shh to the cells caused levels of a protein called netrin-1 to rise.

“Netrins are best known to play a role in guiding the direction of axon growth as well as morphogenesis and tissue formation,” Álvarez said. “But our work suggested a new role for netrin-1 in the blood brain barrier.”

Curious as to whether this might influence MS, they examined BBB cells from the brains of people who had died from the disease. Normal tissue from these individuals contained low levels of netrin-1, while the diseased lesions in the brain had higher levels. The researchers found similar results in a mouse model of MS called experimental autoimmune encephalomyelitis, or EAE.

Next, the team directly measured netrin-1’s effect on BBB permeability by labeling tracer molecules and found that netrin-1 significantly reduced the movement of molecules across cultures of human BBB endothelial cells. Further experiments showed that netrin regulates this process by promoting the expression of the so-called “tight junction” proteins, which are located between BBB endothelial cells and are responsible for controlling barrier function. The team also found that, when in an environment rife with inflammatory signaling molecules, which would normally compromise the integrity of the BBB, netrin-1 had a counteracting effect, preventing disruption to the BBB.

“In mice bred to lack netrin-1, we observed that proteins normally found in the blood accumulated in the animals’ brain, another sign that netrin-1 ensured the integrity of the BBB,” Podjaski said.

Armed with these findings suggesting netrin-1 protects the BBB, the team tested the potential of netrin-1 in ameliorating EAE symptoms, which are similar to those of people with MS.

“By administering netrin-1 to mice before the EAE disease was induced, we found that animals had less severe disease, delayed disease onset, fewer lesions in their brain, fewer markers of inflammation and better maintenance of body weight compared to mice given a sham treatment,” Podjaski said.

“In mice, we found the disease outcome is better when they’re treated with netrin-1, even when delivered after disease processes had begun,” Alvarez said. “And all those observations held up in vitro as well.”

Moving forward, the researchers hope to further elucidate the pathway through which Shh and netrin-1 operate, with an aim toward finding more effective ways to uphold the barrier and perhaps one day treat diseases like MS.

“We now know that Sonic is above netrin-1 in the signaling pathway, but what else is Sonic hedgehog doing?” Prat said. “We need to complete the puzzle with Sonic first to give us better therapeutic strategies.”

Prat holds the Canada Research Chair in Multiple Sclerosis. The University of Montreal is officially known as Université de Montréal.

Research: The research was supported by the Canadian Institutes of Health Research and the Multiple Sclerosis Society of Canada.