The selective demise of motor neurons is the hallmark of Lou Gehrig’s disease, also known as amyotrophic lateral sclerosis (ALS). Yet neurologists have suspected there are other types of brain cells involved in the progression of this disorder — perhaps protection from it, which could light the way to treatment methods for the incurable disease. To get to the bottom of this question, researchers in the Perelman School of Medicine at the University of Pennsylvania engineered mice in which the damage caused by a mutant human TDP-43 protein could be reversed by one type of brain immune cell. TDP-43 is a protein that misfolds and accumulates in the motor areas of the brains of ALS patients.

First author Krista J. Spiller, PhD, a postdoctoral fellow, and senior author Virginia M-Y. Lee, PhD, director of the Center for Neurodegenerative Disease Research and a professor of Pathology and Laboratory Medicine, published their findings this week in Nature Neuroscience.

They found that microglia, the first and primary immune response cells in the brain and spinal cord, are essential for dealing with TDP-43-associated neuron death. This study is the first to demonstrate how healthy microglia respond to pathological TDP-43 in a living animal.

“The prevailing view in the field has been that immune system inflammation contributes to the death of neurons in ALS, but this study shows the opposite – that microglia are actually critical for neuronal survival,” Lee said.

The number of microglia cells remained stable in mice with ALS symptoms. However, after the researchers chemically suppressed expression of pathological human TDP-43 in the mice, microglia dramatically proliferated and changed their shape and what genes they expressed.

The researchers were perplexed as to why the microglia did not react automatically to the presence of mutant TDP-43 and how subduing its expression incited microglia to react. “This is still a mystery, but one that we’d very much like to figure out in future studies,” Spiller said.

The normally branched microglia retracted their extensions and expanded the size of their main cell bodies. (This rapid change in shape is fairly unique to microglia in the central nervous system, although macrophages, microglia’s immune-system counterpart in peripheral parts of the body, are similarly dynamic in their shape shifting.) 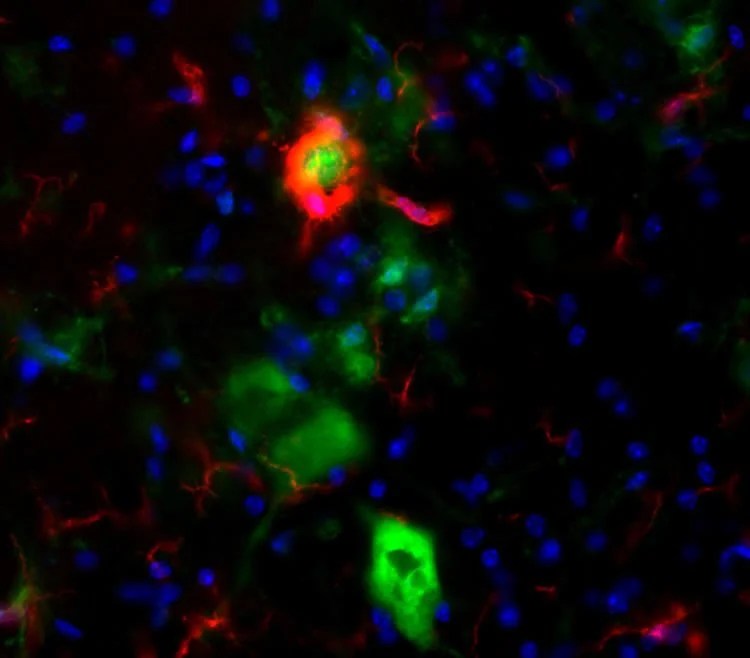 The now abundant, remade microglia multiplied by 70 percent after one week and selectively cleared accumulated human TDP-43 from motor neurons. Microglia surround TDP-43-filled neurons and turned on genes to make proteins that help them attach to the sick cells and induce a process called phagocytosis that envelops the mutant proteins for disposal. After the mop up, mice stopped exhibiting motor dysfunction symptoms such as leg clasping and tremors, and they regained their ability to walk and gain weight.

Conversely, TDP-43 was not fully cleared in mice with no microglia. When proliferation of microglia was blocked, the mice failed to regain full muscle function, revealing how important microglia are for cleaning up clumps of misfolded proteins.

“The way reactive microglia protect neurons points us towards new ideas for ALS therapies,” Spiller said. “For example, we want to know if we can encourage the expansion of microglia in early-stage ALS patients to save their motor neurons.”

Funding: This work was supported by the Judith and Jean Pape Adams Charitable Foundation, the ALS Association, the National Institutes of Health (PO1-017586), and gifts from the Koller and Pottruck families.

Though motor neurons selectively degenerate in amyotrophic lateral sclerosis, other cell types are likely involved in this disease. We recently generated rNLS8 mice in which human TDP-43 (hTDP-43) pathology could be reversibly induced in neurons and expected that microglia would contribute to neurodegeneration. However, only subtle microglial changes were detected during disease in the spinal cord, despite progressive motor neuron loss; microglia still reacted to inflammatory triggers in these mice. Notably, after hTDP-43 expression was suppressed, microglia dramatically proliferated and changed their morphology and gene expression profiles. These abundant, reactive microglia selectively cleared neuronal hTDP-43. Finally, when microgliosis was blocked during the early recovery phase using PLX3397, a CSF1R and c-kit inhibitor, rNLS8 mice failed to regain full motor function, revealing an important neuroprotective role for microglia. Therefore, reactive microglia exert neuroprotective functions in this amyotrophic lateral sclerosis model, and definition of the underlying mechanism could point toward novel therapeutic strategies.