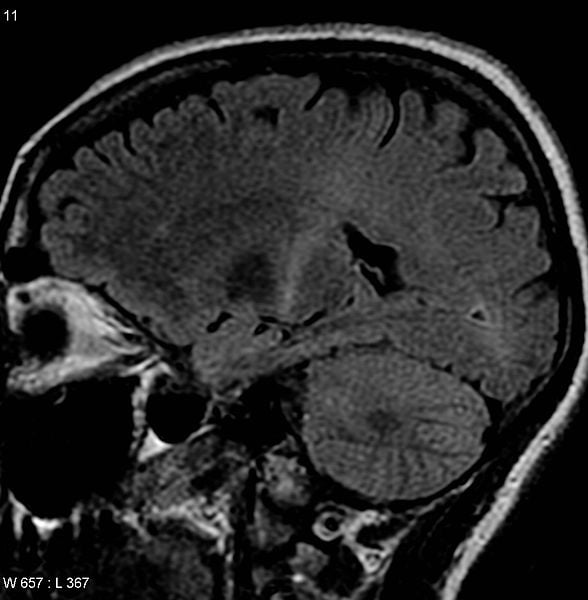 In recent years, there has been increasing evidence that ALS and FTD might have similar origins. Common factors have been identified at the microscopic level, in addition to overlapping symptoms. The image shows a coronal brain scan of a person with a clinical diagnosis of ALS. Credited to Frank Gaillard.
Home
Featured

Misplaced Molecules: New Insights into the Causes of Dementia

A shortage of a protein called TDP-43 caused muscle wasting and stunted nerve cells. This finding supports the idea that malfunction of this protein plays a decisive role in amyotrophic lateral sclerosis (ALS) and frontotemporal dementia (FTD). The study is published in the Proceedings of the National Academy of Sciences.

ALS is an incurable neurological disease which manifests as rapidly progressing muscle wasting. Both limbs and respiratory muscles are affected. This leads to impaired mobility and breathing problems. Patients commonly die within a few years after the symptoms emerged. In rare cases, of which the British physicist Stephen Hawking is the most notable, patients can live with the disease for a long time. In Germany estimates show over 150,000 patients suffering from ALS, an average of 1 in 500 people.

Over the last few years, there has been increasing evidence that ALS and FTD, a form of dementia associated with changes in personality and social behavior, may have similar or even the same origins. The symptoms overlap and common factors have also been found at the microscopic level. In many cases, particles accumulate and form clumps in the patient’s nerve cells: this applies particularly to the TDP-43 protein.

“Normally, this protein is located in the cell nucleus and is involved in processing genetic information,” explains molecular biologist Dr. Bettina Schmid, who works at the DZNE Munich site and at LMU. “However, in cases of disease, TDP-43 accumulates outside the nucleus forming aggregates.” Schmid explains that it is not yet clear whether these clumps are harmful. “However, the protein’s normal function is clearly disrupted. It no longer reaches the nucleus to perform its actual task. There seems to be a relationship between this malfunction and the disease.”

However, until now little was known about the function of TDP-43. What are the consequences when this protein becomes non-functional? In order to answer this question, the team led by Bettina Schmid cooperated with the research group of Prof. Christian Haass to investigate the larvae of specially bred zebrafish. Their genetic code had been modified in such a way that no TDP-43 was produced in the organism of the fish. The result: the young fish showed massive muscle wasting and died a few days after hatching. Moreover, the extensions of the nerve cells which control the muscles were abnormal.

Feeling burned out? The contributors could be more related to depression than you think

“To some extent, these are symptoms typical of ALS and FTD. Therefore, a loss of function of TDP-43 does seem to play a critical role in the disease,” says Haass, Site Speaker of the DZNE Munich Site and chair of Metabolic Biochemistry at LMU.

The study revealed one more finding which surprised the researchers: the blood flow of the fish was massively disturbed. “It is well known that circulatory disorders play a part in other forms of dementia, notably in the case of Alzheimer’s,” says Haass. “We now want to investigate whether such problems with blood flow may be a general problem of neurodegenerative diseases and whether such problems occur particularly in patients with ALS and FTD.”

Notes about this ALS and neurodegeneration research