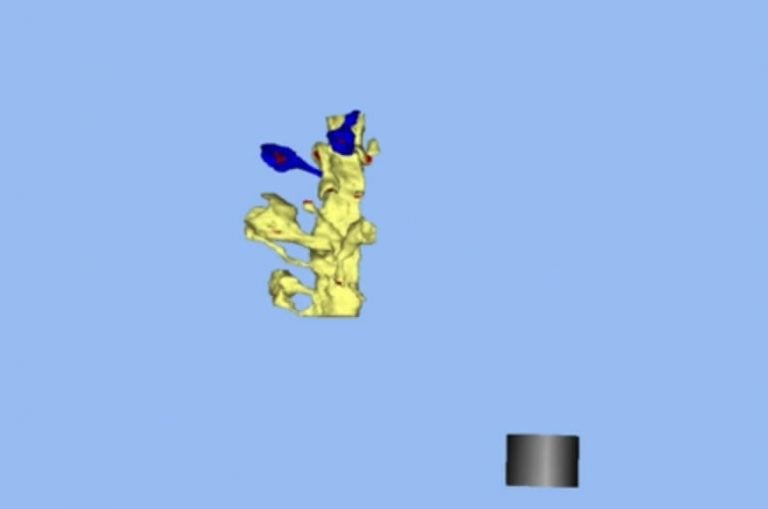 Connections in the brain not only expand as needed in response to learning or experiencing new things, but others will shrink as a result. In this 3-D model, over time, the information-sending part of one neuron, which will appear as the horizontal white structure in the video, makes synaptic connections (blue) with the information-receiving part of another neuron, which will appear in green. NeuroscienceNews.com image is credited to UT Austin/Salk Institute.
Home
Featured

Summary: According to researchers, some synapses get smaller as we learn new information.

Those of us who can’t resist tourist tchotchkes are big fans of suitcases with an expandable compartment. Now, it turns out the brain’s capacity for storing new memories is expandable, too, with limitations.

Salk Institute scientists and collaborators at the University of Texas at Austin and the University of Otago, in New Zealand, found that connections in the brain not only expand as needed in response to learning or experiencing new things, but that others will shrink as a result. The work, which could shed light on conditions in which memory formation is impaired, such as depression or Alzheimer’s disease, appeared in Proceedings of the National Academy of Sciences on February 20, 2018.

“The brain has the capacity to store an immense amount of information at the synapses between nerve cells,” says Professor Terrence Sejnowski, who is head of the Salk’s Computational Neurobiology Laboratory and co-corresponding author of the new paper. “So although we already knew where memories are stored, this work helps clarify how they are stored.”

Every time you look at something new, or have a new thought, millions of brain cells communicate that information to each other in the form of electrical and chemical signals across tiny gaps called synapses. It was known that synapses can grow larger–that is, become more likely to release chemicals (or release more of them) to better transmit information to receiving neurons. However, little is known about normal function and disruptions in synaptic communication, the latter of which is a hallmark of many neuropsychiatric conditions and memory impairment.

Previously, Sejnowski used 3D computer reconstructions and modeling to uncover that the brain’s memory capacity is 10 times greater than had been thought. In the new work, he and collaborators in Texas and New Zealand decided to further investigate brain function by stimulating a region in rodents’ brains important for memory, called the hippocampus. This allowed the researchers to mimic, under very controlled conditions, the effect that a new experience would have on a brain region common to mammals.

The researchers imaged the hippocampal brain samples using electron microscopy and analyzed the resulting data. They expected to see synapses get bigger, which they are known to do in a process of learning known as long-term potentiation. What they did not expect–but found–was that, as some synapses got bigger, others got smaller.

“It’s an intuitive idea that as we learn something new, synapses strengthen and get bigger,” says Sejnowski. “This shows that there is a balance: some get stronger, some get weaker.”

Sejnowski says that the results make sense because if synapses only got bigger, they’d reach a limit and no new information could be stored, but this is the first time the connection has been demonstrated. The work also reveals that by increasing the range of synaptic sizes, the overall storage capacity goes up–you can have more synapses, large and small.

Interestingly, when the team quantitatively estimated how much synaptic information could be stored in two different areas of the hippocampus–the dentate gyrus and CA1–the amounts varied dramatically, which may be related to differences in their functions.

New Role for Blood-Brain Barrier in Neuron Function and Damage