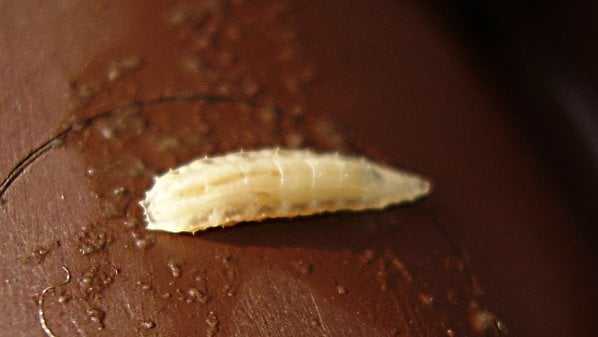 Duke researchers studied the larvae of fruit flies to investigate their sense of touch. Like humans and other animals, larvae use touch to learn, explore their environment, sense danger, and more.
Home
Featured

Sensory Neurons Identified as Critical to Sense of Touch

While studying the sense of touch, scientists at Duke Medicine have pinpointed specific neurons that appear to regulate perception.

The sensory neurons are characterized by thin spikes, and based on their volume, these protrusions determine the cells’ sensitivity to force.

The findings in fruit fly larvae, which appear in online Oct. 25, 2012, in the journal Current Biology, demonstrate the first known function for the sensory neurons and provide insights that could broaden the understanding of chronic pain syndromes in humans.

“On a molecular level, touch is the most poorly understood of the senses,” said W. Daniel Tracey, PhD, associate professor of anesthesiology at Duke University Medical Center and study author. “While there are many types of touch sensor neurons, we still don’t know how these neurons respond to force.”

Duke researchers studied the larvae of fruit flies to investigate their sense of touch. Like humans and other animals, larvae use touch to learn, explore their environment, sense danger, and more.

To elicit responses to touch, scientists stroked the larvae with the tip of an eyelash, and then measured behavioral responses.

No correlation was found between the length of the filopodia and sensitivity to touch.

Given that filopodia are necessary for touch, and their volume determines sensitivity, researchers also investigated whether certain genes play a role in the development of filopodia. Tracey and his colleagues conducted a genetic analysis and found that several ion channel gene families were important in the formation of filopodia. One gene, called the ripped pocket gene, was identified as necessary for gentle touch responses.

“Our discoveries in fruit fly larvae give us really important clues as to where we should look in the genes of mammals to better understand the sense of touch,” Tracey continued. “We do not yet know if humans will present similar structures, but further studies may shed light on the sense of touch in our species.”

Researchers hope that a better understanding of touch in humans will eventually help clinicians treat patients with sensory or pain issues. Some patients with chronic pain may respond to very light touch or pressure, inappropriately sending strong pain signals to brain.

“By learning more about touch sensing, we can begin to explore why these neurons become so responsive to stimuli, and how it is that these signals become painful. We might – in the long run – help people with chronic pain issues in new ways by looking at the underlying molecular mechanisms,” Tracey said.

Notes about this sensory neuroscience research