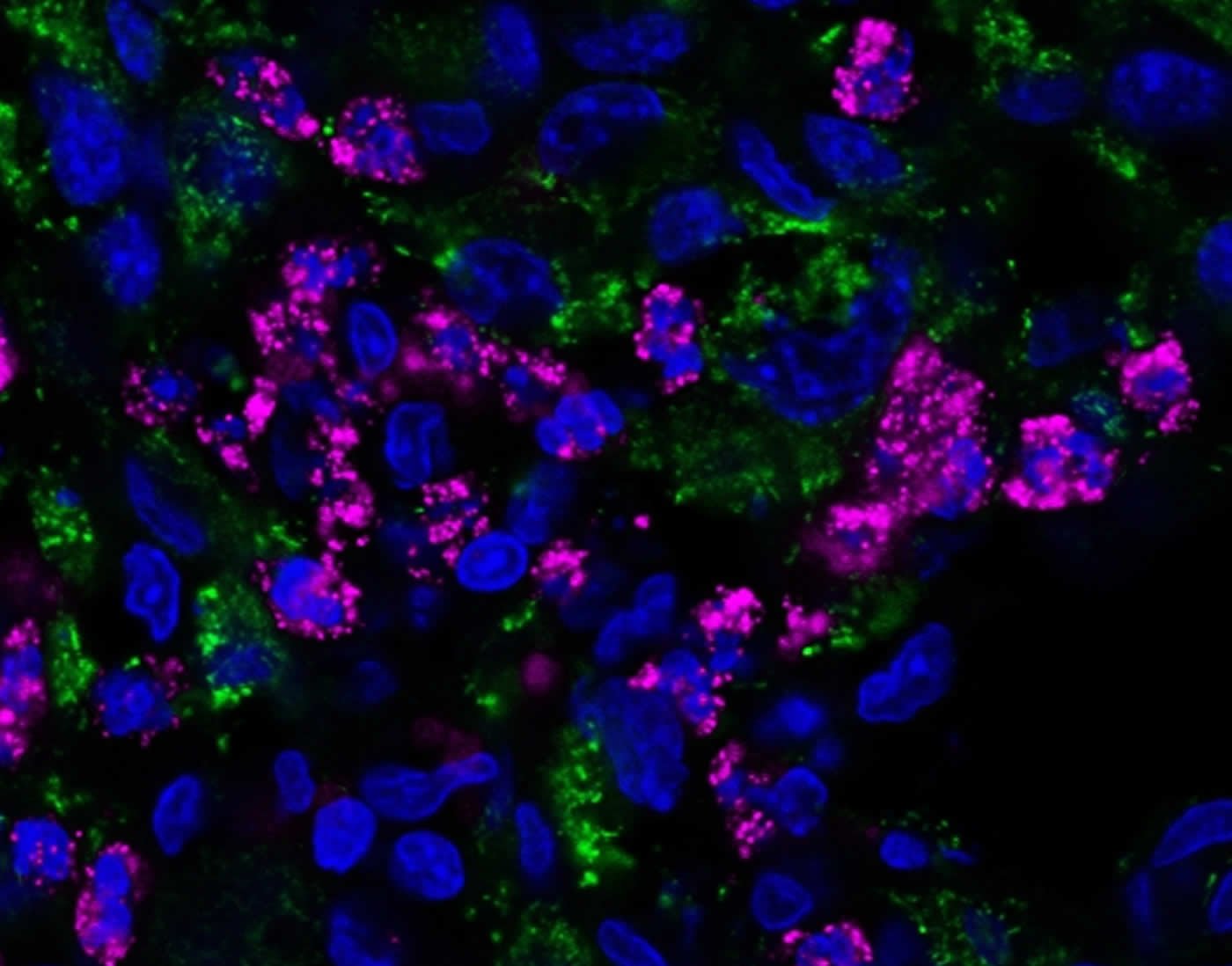 A fluorescent stained image of a tumor marking bacterial nanocarriers in pink, cancer cell nuclei in blue, and human mitochondria (another indicator of tumor cells) in green. NeuroscienceNews.com image is credited to the researchers.

Summary: A strain of a bacteria commonly associated with food poisoning could prove an unlikely ally in the battle against glioblastoma brain cancer, a new study reports.

Biomedical engineers at Duke University have recruited an unlikely ally in the fight against the deadliest form of brain cancer—a strain of salmonella that usually causes food poisoning.

Clinicians sorely need new treatment approaches for glioblastoma, the most aggressive form of brain cancer. The blood-brain barrier—a protective sheath separating brain tissue from its blood vessels—makes it difficult to attack the disease with drugs. It’s also difficult to completely remove through surgery, as even tiny remnants inevitably spawn new tumors. Even with the best care currently available, median survival time is a dire 15 months, and only 10 percent of patients survive five years once diagnosed.

The Duke team decided to pursue an aggressive treatment option to match its opponent, turning to the bacterium Salmonella typhimurium. With a few genetic tweaks, the engineers turned the bacterium into a cancer-seeking missile that produces self-destruct orders deep within tumors. Tests in rat models with extreme cases of the disease showed a remarkable 20 percent survival rate over 100 days—roughly equivalent to 10 human years—with the tumors going into complete remission.

The results appeared online on December 21, 2016, in the journal Molecular Therapy – Oncolytics.

“Since glioblastoma is so aggressive and difficult to treat, any change in the median survival rate is a big deal,” said Johnathan Lyon, a PhD student working with Ravi Bellamkonda, Vinik Dean of Duke’s Pratt School of Engineering, whose laboratory is currently transitioning to Duke from Georgia Tech, where much of the work was completed. “And since few survive a glioblastoma diagnosis indefinitely, a 20 percent effective cure rate is phenomenal and very encouraging.”

Previous studies have shown, quite accidentally, that the presence of bacteria can cause the immune system to recognize and begin attacking tumors. However, follow-up clinical trials with genetically detoxified strains of S. typhimurium have since proven ineffective by themselves.

To use these common intestinal bacteria as tumor-seeking missiles, Lyon and Bellamkonda, working with lead co-author Nalini Mehta, selected a detoxified strain of S. typhimurium that was also deficient in a crucial enzyme called purine, forcing the bacteria to seek supplies elsewhere.

Tumors just so happen to be an excellent source of purine, causing the bacteria to flock to them in droves.

Then, the Duke engineers made a series of genetic tweaks so that the bacteria would produce two compounds called Azurin and p53 that instruct cells to commit suicide—but only in the presence of low levels of oxygen. And since cancerous cells are multiplying so energetically, the environment around and within tumors has unusually low oxygen.

“A major challenge in treating gliomas is that the tumor is dispersed with no clear edge, making them difficult to completely surgically remove. So designing bacteria to actively move and seek out these distributed tumors, and express their anti-tumor proteins only in hypoxic, purine rich tumor regions is exciting,” said Ravi Bellamkonda, Vinik Dean of Duke’s Pratt School of Engineering and corresponding author of the paper. “And because their natural toxicity has been deactivated, they don’t cause an immunological response. At the doses we used in the experiments, they were naturally cleared once they’d killed the tumors, effectively destroying their own food source.”

The researchers tested the modified bacteria by injecting them directly into the rats’ brains. While this may sound like an extreme delivery option, the first course of action usually performed with glioblastoma is to surgically remove the primary tumor, if possible, leaving the opportunity to directly deliver therapeutics.

The treatment worked in 20 percent of the rats, causing complete tumor regression and extending their lives by 100 days, which translates to roughly 10 human years.

In the 80 percent that did not survive, however, the treatment didn’t change the length of time the rats survived. After testing for common signs of resistance to the anti-tumor compounds and finding none, the researchers concluded the ineffectiveness was likely due to inconsistencies in the bacteria’s penetration, or to the aggressive tumor growth outpacing the bacteria. But every rat showed initial signs of improvement after treatment.

“It might just be a case of needing to monitor the treatment’s progression and provide more doses at crucial points in the cancer’s development,” said Lyon. “However, this was our first attempt at designing such a therapy, and there is some nuance to the specific model we used, thus more experiments are needed to know for sure.”

The researchers now plan to program their bacteria to produce different drugs that cause stronger reactions in the tumors. These will be more difficult to implement, however, as other drugs are not as specific to tumor cells as those used in this study, making potential side effects more of a concern.

About this cancer research article

Treatment of aggressive glioblastoma brain tumors is challenging, largely due to diffusion barriers preventing efficient drug dosing to tumors. To overcome these barriers, bacterial carriers that are actively motile, and programmed to migrate and localize to tumor zones were designed. These carriers can induce apoptosis via hypoxia-controlled expression of a tumor suppressor protein p53 and a pro-apoptotic drug, Azurin. In a xenograft model of human glioblastoma in rats, bacterial carrier therapy conferred a significant survival benefit with 19% overall long-term survival of >100 days in treated animals relative to a median survival of 26 days in control untreated animals. Histological and proteomic analyses were performed to elucidate the safety and efficacy of these carriers showing an absence of systemic toxicity, and a restored neural environment in treated responders. In the treated non-responders, proteomic analysis revealed competing mechanisms of pro-apoptotic and drug resistant activity. This bacterial carrier opens a versatile avenue to overcome diffusion barriers in glioblastoma by virtue of its active motility in extracellular space, and can lead to tailored therapies via tumor-specific expression of tumoricidal proteins.