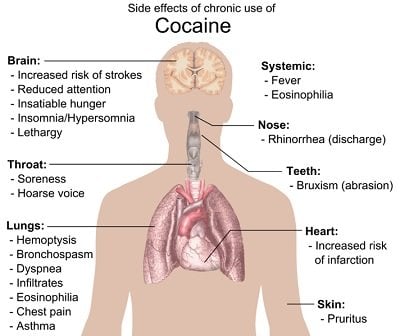 Researchers observed few side effects in those given the topiramate treatment. In general, participants who were given this drug experienced mild side effects which ranged from taste distortions to difficulty in concentrating. The image details the effects of cocaine abuse on the body.
Home
Featured

Professor Bankole A. Johnson, Chairman of Psychiatry at the University of Maryland School of Medicine, reports latest findings on the anti-epileptic drug, topiramate.

New research published in JAMA Psychiatry reveals that topiramate, a drug approved by the U.S. Food and Drug Administration (FDA) to treat epilepsy and migraine headaches, also could be the first reliable medication to help treat cocaine dependence.

The study, led by Bankole A. Johnson, DSc. MD., MB.ChB., MPhil., chairman of the Department of Psychiatry at the University of Maryland School of Medicine and head of the School’s new Brain Science Research Consortium Unit, with support from the National Institutes of Health and Agency for Healthcare Research and Quality, is one of the first to establish a pharmacological treatment for cocaine addiction, for which there are currently no FDA-approved medications.

Addiction affects 13.2 to 19.7 million cocaine users worldwide. Cocaine is responsible for more U.S. emergency room visits than any other illegal drug. Cocaine harms the brain, heart, blood vessels, and lungs — and can even cause sudden death.

Professor Johnson, one of the nation’s leading neuroscientists and psychopharmacologists, had previously found that topiramate was a safe and effective treatment for alcohol dependence compared with placebo.

In releasing the new study, Professor Johnson, who conducted the research when he was with Department of Psychiatry and Neurobehavioral Sciences at the University of Virginia, provided full disclosures, which follow the text of this news announcement.*

The study enrolled 142 participants, aged 18 years or older, seeking treatment for cocaine dependence. Following enrollment, participants were randomly assigned into a topiramate group or placebo group. Neither the participants nor the healthcare professionals administering the treatment knew who was in which group (double-blinded study).

Using an intent-to-treat analysis, the researchers found that topiramate was more efficacious than placebo at increasing the participants’ weekly proportion of cocaine nonuse days and in increasing the likelihood that participants would have cocaine-free weeks. Furthermore, compared with placebo, topiramate also was significantly associated with a decrease in craving for cocaine and an improvement in participants’ global functioning.

“Our findings reveal that topiramate is a safe and robustly efficacious medicine for the treatment of cocaine dependence, and has the potential to make a major contribution to the global health crisis of addiction,” Professor Johnson said. “However, topiramate treatment also is associated with glaucoma, and higher doses of the drug can increase the risk of side effects; therefore, caution must be exercised when prescribing the drug, especially when given in high doses.”

These results build upon earlier work from Professor. Johnson’s group which indicated that individuals dependent on cocaine, but not seeking treatment, who took topiramate were more likely to experience reduced cravings and preference for cocaine, compared with placebo. The findings of the current study indicate that topiramate may be even more effective in treating people with addiction who actively want to quit using cocaine.

“Because topiramate is the first medication to demonstrate a robust therapeutic effect for the treatment of cocaine or alcohol dependence, its fundamental neurochemical effects provide important clues as to common links in the neurobiological basis of the addictive process in general,” remarked Professor Johnson. “These findings also add to our understanding of how addiction affects the brain because it demonstrates the unique concept that dual neurotransmitter modulation, by simultaneously augmenting the inhibitory action of gamma amino butyric acid and inhibiting the excitatory effects of glutamate, can result in therapeutic effects that reduce the propensity to use cocaine.”

Notes about this addiction research

Investigating the Link Between Antibiotic Use and Inflammatory Pain Reduction

Professor Johnson’s primary area of research expertise is the psychopharmacology of medications for treating addictions. Professor Johnson is a fellow of the American College of Neuropsychopharmacologists, a distinguished fellow of the American Psychiatric Association, and a fellow of the Royal College of Psychiatrists. He is the principal investigator on NIH-funded research studies using neuroimaging, neuropharmacology, and molecular genetics techniques. All work for this study was conducted by Professor Johnson and his team in the Department of Psychiatry and Neurobehavioral Sciences at the University of Virginia. The University of Virginia’s Institutional Review Board approved all clinical protocols and all participants provided informed consent prior to being admitted into the study. For more information about the study, refer to clinicaltrials.gov identifier NCT00249691.

Professor Johnson reported serving as a consultant for Johnson & Johnson (Ortho-McNeil Janssen Scientific Affairs, LLC) the manufacturer of topiramate, from 2003-2008 and currently has no affiliation with that Company, Transcept Pharmaceuticals, Inc. from 2006-2008, Eli Lilly and Company from 2009-2010, and Organon from 2007-2010. He currently consults for D&A Pharma, ADial Pharmaceuticals, LLC, (with which he also serves as chairman), and Psychological Education Publishing Company (PEPCo), LLC. Topiramate is currently available as a generic medicine in the USA, and Professor Johnson has no commercial affiliation with any generic manufacturer of topiramate. Dr. Liu reported serving as a consultant for Celladon Corporation. No other disclosures were reported.