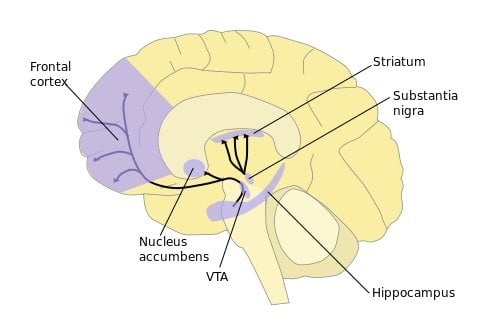 Methylphenidate decreased connectivity between areas of the brain that have been strongly implicated in the formation of habits, including compulsive drug seeking and craving. This is a diagram of the dopamine pathway in the brain, implicated in addiction.
Home
Featured

A single dose of a commonly-prescribed attention deficit hyperactivity disorder (ADHD) drug helps improve brain function in cocaine addiction, according to an imaging study conducted by researchers from the Icahn School of Medicine at Mount Sinai. Methylphenidate (brand name Ritalin®) modified connectivity in certain brain circuits that underlie self-control and craving among cocaine-addicted individuals. The research is published in the current issue of JAMA Psychiatry, a JAMA network publication.

“Orally administered methylphenidate increases dopamine in the brain, similar to cocaine, but without the strong addictive properties,” said Rita Goldstein, PhD, Professor of Psychiatry at Mount Sinai, who led the research while at Brookhaven National Laboratory (BNL) in New York. “We wanted to determine whether such substitutive properties, which are helpful in other replacement therapies such as using nicotine gum instead of smoking cigarettes or methadone instead of heroin, would play a role in enhancing brain connectivity between regions of potential importance for intervention in cocaine addiction.”

Anna Konova, a doctoral candidate at Stony Brook University, who was first author on this manuscript, added, “Using fMRI, we found that methylphenidate did indeed have a beneficial impact on the connectivity between several brain centers associated with addiction.”

Dr. Goldstein and her team recruited 18 cocaine addicted individuals, who were randomized to receive an oral dose of methylphenidate or placebo. The researchers used functional magnetic resonance imaging (fMRI) to measure the strength of connectivity in particular brain circuits known to play a role in addiction before and during peak drug effects. They also assessed each subject’s severity of addiction to see if this had any bearing on the results.

Methylphenidate decreased connectivity between areas of the brain that have been strongly implicated in the formation of habits, including compulsive drug seeking and craving. The scans also showed that methylphenidate strengthened connectivity between several brain regions involved in regulating emotions and exerting control over behaviors—connections previously reported to be disrupted in cocaine addiction.

“The benefits of methylphenidate were present after only one dose, indicating that this drug has significant potential as a treatment add-on for addiction to cocaine and possibly other stimulants,” said Dr. Goldstein. “This is a preliminary study, but the findings are exciting and warrant further exploration, particularly in conjunction with cognitive behavioral therapy or cognitive remediation.”

Notes about this neuropharmacology and addiction research