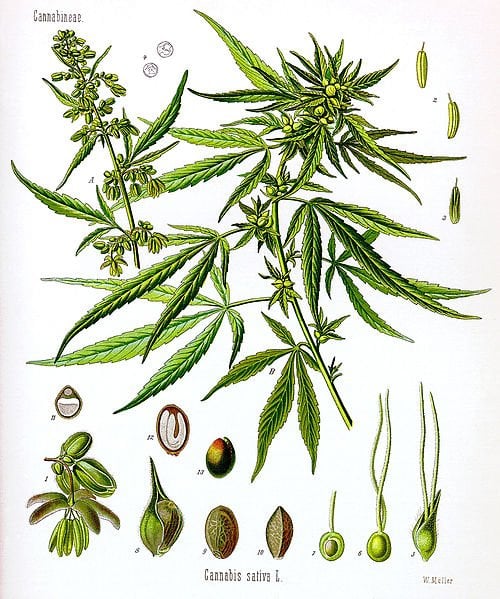 Taking immune cells isolated from paralyzed mice, researchers treated them with either THC or CBD. In both instances, the immune cells produced fewer inflammatory molecules, particularly IL-17, which is strongly associated with MS. The illustration is of the cannabis sativa plant.
Home
Featured

Sending Multiple Sclerosis Up in Smoke

Multiple sclerosis is an inflammatory disease in which the immune system attacks the nervous system. The result can be a wide range of debilitating motor, physical, and mental problems. No one knows why people get the disease or how to treat it.

In a new study published in the Journal of Neuroimmune Pharmacology, Drs. Ewa Kozela, Ana Juknat, Neta Rimmerman and Zvi Vogel of Tel Aviv University’s Dr. Miriam and Sheldon G. Adelson Center for the Biology of Addictive Diseases and Sackler Faculty of Medicine demonstrate that some chemical compounds found in marijuana can help treat MS-like diseases in mice by preventing inflammation in the brain and spinal cord.

“Inflammation is part of the body’s natural immune response, but in cases like MS it gets out of hand,” says Kozela. “Our study looks at how compounds isolated from marijuana can be used to regulate inflammation to protect the nervous system and its functions.” Researchers from the Weizmann Institute of Science co-authored the study.

Israel has a strong tradition of marijuana research. Israeli scientists Raphael Mechoulam and Yechiel Gaoni discovered THC, or tetrahydrocannabinol, in 1964, kick-starting the scientific study of the plant and its chemical constituents around the world. Since then, scientists have identified about 70 compounds — called cannabinoids — that are unique to cannabis and have interesting biological effects. In the 1990s, Prof. Vogel was among the first researchers to describe endocannabinoids, molecules that act like THC in the body.

Besides THC, the most plentiful and potent cannabinoid in marijuana is cannabidiol, or CBD. The TAU researchers are particularly interested in CBD, because it offers medicinal benefits without the controversial mind-altering effects of THC.

In a 2011 study, they showed that CBD helps treat MS-like symptoms in mice by preventing immune cells in their bodies from transforming and attacking the insulating covers of nerve cells in the spinal cord. After inducing an MS-like condition in mice — partially paralyzing their limbs — the researchers injected them with CBD. The mice responded by regaining movement, first twitching their tails and then beginning to walk without a limp. The researchers noted that the mice treated with CBD had much less inflammation in the spinal cord than their untreated counterparts.

In the latest study, the researchers set out to see if the known anti-inflammatory properties of CBD and THC could also be applied to the treatment of inflammation associated with MS — and if so, how. This time they turned to the immune system.

The researchers took immune cells isolated from paralyzed mice that specifically target and harm the brain and spinal cord, and treated them with either CBD or THC. In both cases, the immune cells produced fewer inflammatory molecules, particularly one called interleukin 17, or IL-17, which is strongly associated with MS and very harmful to nerve cells and their insulating covers. The researchers concluded that the presence of CBD or THC restrains the immune cells from triggering the production of inflammatory molecules and limits the molecules’ ability to reach and damage the brain and spinal cord.

Further research is needed to prove the effectiveness of cannabinoids in treating MS in humans, but there are reasons for hope, the researchers say. In many countries, CBD and THC are already prescribed for the treatment of MS symptoms, including pain and muscle stiffness.

“When used wisely, cannabis has huge potential,” says Kozela, who previously studied opiates like morphine, derived from the poppy plant. “We’re just beginning to understand how it works.”