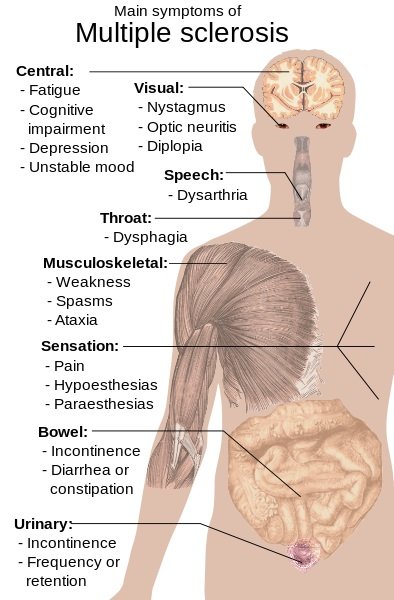 Researchers analyzed the CSF of patients with multiple sclerosis using a combination of proteomics and high resolution mass spectrometry. Proteins in the cerebrospinal fluid of new MS patients suggested physiological disruptions to both the white and gray matter in the brain. This illustration shows the main symptoms of multiple sclerosis.
Home
Featured

The search for the cause of multiple sclerosis, a debilitating disease that affects up to a half million people in the United States, has confounded researchers and medical professionals for generations. But Steven Schutzer, a physician and scientist at Rutgers New Jersey Medical School, has now found an important clue why progress has been slow – it appears that most research on the origins of MS has focused on the wrong part of the brain.

Look more to the gray matter, the new findings published in the journal PLOS ONE suggest, and less to the white. That change of approach could give physicians effective tools to treat MS far earlier than ever before.

Until recently, most MS research has focused on the brain’s white matter, which contains the nerve fibers. And for good reason: Symptoms of the disease, which include muscle weakness and vision loss, occur when there is deterioration of a fatty substance called myelin, which coats nerves contained in the white matter and acts as insulation for them. When myelin in the brain is degraded, apparently by the body’s own immune system, and the nerve fiber is exposed, transmission of nerve impulses can be slowed or interrupted. So when patients’ symptoms flare up, the white matter is where the action in the brain appears to be.

But Schutzer attacked the problem from a different direction. He is one of the first scientists to analyze patients’ cerebrospinal fluid (CSF) by taking full advantage of a combination of technologies called proteomics and high-resolution mass spectrometry. “Proteins present in the clear liquid that bathes the central nervous system can be a window to physical changes that accompany neurological disease,” says Schutzer, “and the latest mass spectrometry techniques allow us to see them as never before.” In this study, he used that novel approach to compare the cerebrospinal fluid of newly diagnosed MS patients with that of longer term patients, as well as fluid taken from people with no signs of neurological disease.

What Schutzer found startled one of his co-investigators, Patricia K. Coyle of Stony Brook University in New York, one of the leading MS clinicians and researchers in the country. The proteins in the CSF of the new MS patients suggested physiological disruptions not only in the white matter of the brain where the myelin damage eventually shows up. They also pointed to substantial disruptions in the gray matter, a different part of the brain that contains the axons and dendrites and synapses that transfer signals between nerves.

Several scientists had in fact hypothesized that there might be gray matter involvement in early MS, but the technology needed to test their theories did not yet exist. Schutzer’s analysis, which Coyle calls “exquisitely sensitive,” provides the solid physical evidence for the very first time. It includes a finding that nine specific proteins associated with gray matter were far more abundant in patients who had just suffered their first attack than in longer term MS patients or in the healthy controls. “This evidence indicates gray matter may be the critical initial target in MS rather than white matter,” says Coyle. “We may have been looking in the wrong area.”

According to Coyle, that realization presents exciting possibilities. One, she says, is that patients who suffer attacks that appear related to MS could have their cerebrospinal fluid tested quickly. If proteins that point to early MS are found, helpful therapy could begin at once, before the disease can progress further.

Coyle says Schutzer’s findings may also lead one day to more effective treatments for MS with far fewer side effects. Without specific knowledge of what causes multiple sclerosis, patients now need to take medications that can broadly weaken their immune systems. These drugs slow the body’s destruction of myelin in the brain, but also degrade the immune system’s ability to keep the body healthy in other ways. By suggesting an exciting new direction for MS research, Schutzer and his team may have set the stage for more targeted treatments that attack MS while preserving other important immune functions.

Schutzer sees an even broader future for the work he is now doing. He also has used advanced analysis of cerebrospinal fluid to identify physical markers for neurological ailments that include Lyme disease, in which he has been a world leader in research for many years, as well as chronic fatigue syndrome. He says, “When techniques are refined, more medical conditions are examined, and costs per patient come down, one day there could be a broad panel of tests through which patients and their doctors can get early evidence of a variety of disorders, and use that knowledge to treat them both more quickly and far more effectively than is possible now.”

This research was funded by the National Institutes of Health.