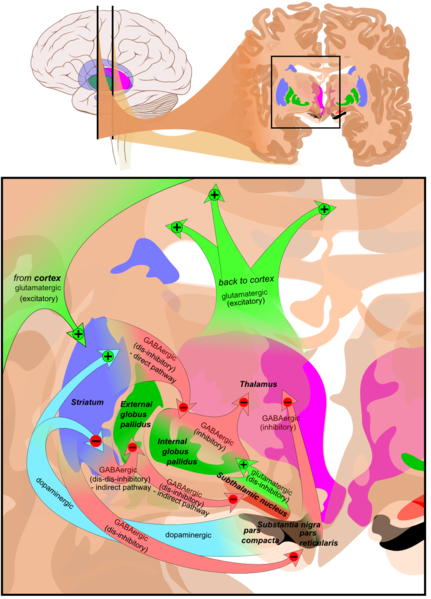 The findings, from studies of nerve cells in the striatum, reveal a point on the KOR signaling pathway that may prove to be an important indicator of whether drug candidates can produce effects similar to the natural biological effects. Main circuits of the basal ganglia. Picture shows 2 coronal slices that have been superimposed to include the involved basal ganglia structures. + and - signs at the point of the arrows indicate respectively whether the pathway is excitatory or inhibitory in effect. Green arrows refer to excitatory glutamatergic pathways, red arrows refer to inhibitory GABAergic pathways and turquoise arrows refer to dopaminergic pathways that are excitatory on the direct pathway and inhibitory on the indirect pathway. Note that dis-inhibitory pathways in effect are excitatory on the feedback to the cortex, while dis-dis-inhibitory pathways in effect are inhibitory. The striatum is shows in a purple blue color.
Home
Featured

New Findings Could Help Improve Development of Drugs for Addiction

Scientists from the Florida campus of The Scripps Research Institute have described findings that could enable the development of more effective drugs for addiction with fewer side effects.

The study, published in the August 2, 2013 issue of the Journal of Biological Chemistry, showed in a combination of cell and animal studies that one active compound maintains a strong bias towards a single biological pathway, providing insight into what future drugs could look like.

The compound examined in the study, known as 6’- guanidinonaltrindole (6’-GNTI), targets the kappa opioid receptor (KOR). Located on nerve cells, KOR plays a role in the release of dopamine, a neurotransmitter that plays a key role in drug addiction. Drugs of abuse often cause the brain to release large amounts of dopamine, flooding the brain’s reward system and reinforcing the addictive cycle.

“There are a number of drug discovery efforts ongoing for KOR,” said Laura Bohn, a TSRI associate professor, who led the study. “The ultimate question is how this receptor should be acted upon to achieve the best therapeutic effects. Our study identifies a marker that shows how things normally happen in live neurons—a critically important secondary test to evaluate potential compounds.”

While KOR has become the focus for drug discovery efforts aimed at treating addiction and mood disorders, KOR can react to signals that originate independently from multiple biological pathways, so current drug candidates targeting KOR often produce unwanted side effects. Compounds that activate KOR can decrease the rewarding effects of abused drugs, but also induce sedation and depression.

The new findings, from studies of nerve cells in the striatum (an area of the brain involved in motor activity and higher brain function), reveal a point on the KOR signaling pathway that may prove to be an important indicator of whether drug candidates can produce effects similar to the natural biological effects.

The first author of the study, ‘Functional Selectivity of 6’-guanidinonaltrindole (6’-GNTI) at Kappa Opioid Receptors in Striatal Neurons,” is Cullen L. Schmid of TSRI. Other authors include John M. Streicher, Chad E. Groer and Lei Zhou of TSRI; and Thomas A. Munro of the Mailman Research Center and Harvard Medical School.

The study was supported by the National Institutes of Health (grant R01 DA031927).