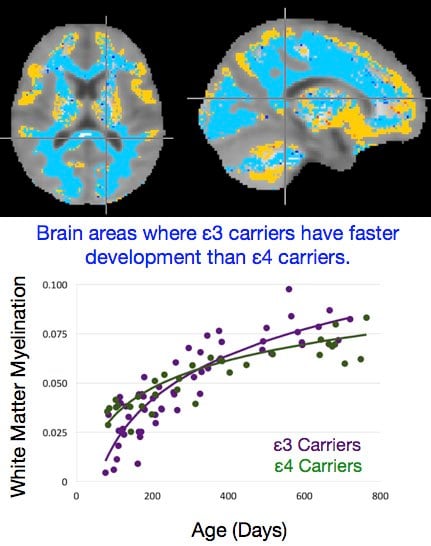 Different areas, different rates of development The graph plots the trajectory of brain development for children carrying the ε3 and ε4 variants of the APOE gene in areas of the brain where they diverge (blue). Credit: Deoni lab/Brown University.
Home
Featured

Brain Imaging Differences in Infants at Genetic Risk for Alzheimer’s

Using a special MRI technique designed for studies of sleeping infants, researchers at Brown University and Banner Alzheimer’s Institute have found that infants who carry a gene associated with an increased risk for Alzheimer’s disease tend to have differences in brain development compared to infants who do not carry the gene. The findings are neither diagnostic nor predictive of Alzheimer’s, but they may be a step toward understanding how this gene confers risk much later in life.

Researchers from Brown University and Banner Alzheimer’s Institute have found that infants who carry a gene associated with increased risk for Alzheimer’s disease tend to have differences in brain development compared to children without the gene. The study, published in JAMA Neurology, demonstrates some of the earliest developmental differences associated with a gene variant called APOE ε4, a common genotype and a known risk factor for late-onset Alzheimer’s.

The researchers imaged the brains of 162 healthy infants between the ages of two months and 25 months. All of the infants had DNA tests to see which variant of the APOE gene they carried. Sixty of them had the ε4 variant that has been linked to an increased risk of Alzheimer’s. Using a specialized MRI technique, the researchers compared the brains of ε4 carriers with non-carriers. They found that children who carry the APOE ε4 gene tended to have increased brain growth in areas in the frontal lobe, and decreased growth in areas in several areas in the middle and rear of the brain. The decreased growth was found in areas that tend to be affected in elderly patients who have Alzheimer’s disease.

Researchers emphasized that the findings do not mean that any of the children in the study are destined to develop Alzheimer’s or that the brain changes detected are the first clinical signs of the disease. What the findings do suggest, however, is that brains of APOE ε4 carriers tend to develop differently from those of non-ε4 carriers beginning very early in life. It is possible that these early changes provide a “foothold” for the later pathologies that lead to Alzheimer’s symptoms, the researchers say. Information from this study may be an important step toward understanding how this gene confers risk for Alzheimer’s, something that is not currently well understood.

“This work is about understanding how this gene influences brain development,” said Sean Deoni, who oversees Brown University’s Advanced Baby Imaging Lab and was one of the study’s senior authors. “These results do not establish a direct link to the changes seen in Alzheimer’s patients, but with more research they may tell us something about how the gene contributes to Alzheimer’s risk later in life.”

The APOE ε4 variant linked to Alzheimer’s is present in about 25 percent of the U.S. population. Not everyone who carries the gene gets Alzheimer’s, but 60 percent of people who develop the disease have at least one copy of the ε4 gene.

The gene is thought to have several different roles in the blood and brain, some of which remain to be clarified. For instance, it has been shown to participate in regulation of cholesterol, a molecule that is involved in the development of gray matter and white matter brain cells. It has also been shown to participate in the regulation of amyloid, a brain protein that accumulates in Alzheimer’s and is now being targeted by investigational treatments. Studies are needed to clarify the ways in which APOE, human development, aging and other risk factors may conspire to produce the brain changes involved in Alzheimer’s disease.

The researchers used an MRI technique developed at Brown’s Advanced Baby Imaging Lab. The technique quiets the MRI machine to a whisper, enabling the brains of healthy babies to be imaged while they sleep without medication. The technique also enables imaging of both gray matter — the part of the brain that contains neurons and nerve fibers — and white matter, which contains the fatty material that insulates the nerve fibers. Both gray and white matter are thought to have a role in Alzheimer’s. White matter growth begins shortly after birth and is an important measure of brain development.

“We’re in a good spot to be able to investigate how this gene influences development in healthy infants,” said Deoni, assistant professor of engineering at Brown. “These infants are not medicated and not showing any cognitive decline — quite the opposite, actually; they’re developing normally.”

There is no reason to believe that the children won’t continue to develop normally, Deoni said. There is no consistent evidence to suggest that ε4 carriers suffer any cognitive problems or developmental delay. And the areas of increased growth raise the possibility that the gene might actually confer some advantages to infants early on. Utimately the researchers hope the findings could lead to new strategies for preventing a disease that currently affects more than 5.2 million people in the U.S. alone.

“It may sound scary that we could detect these brain differences in infants,” said Dr. Eric Reiman, executive director of the Banner Alzheimer’s Institute in Arizona and another senior author on the paper. “But it is our sincere hope that an understanding of the earliest brain changes involved in the predisposition to Alzheimer’s will help researchers find treatments to prevent the clinical onset of Alzheimer’s disease — and do so long before these children become senior citizens.”

Who Do You Think You Are? What Does Your Avatar Say About You?

Notes about this neuroimaging and genetics research