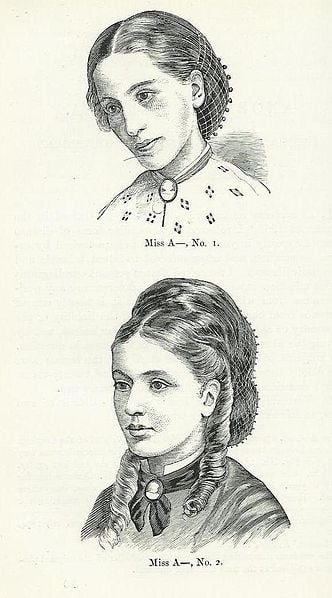 Anorexia nervosa and bulimia nervosa are fairly common, especially among women. They affect between 1 and 3 percent of women. They also are among the most lethal of all psychiatric diseases; about 1 in 1,000 women will die from anorexia. This image is a reproduction of two photographs taken in 1866 and 1870 (photographer unknown). It depicts Miss A, an unnamed patient of William Withey Gull, before and after treatment for anorexia nervosa.
Home
Featured

Eating disorders like anorexia nervosa and bulimia often run in families, but identifying specific genes that increase a person’s risk for these complex disorders has proved difficult.

Now scientists from the University of Iowa and University of Texas Southwestern Medical Center have discovered—by studying the genetics of two families severely affected by eating disorders—two gene mutations, one in each family, that are associated with increased risk of developing eating disorders.

Moreover, the new study shows that the two genes interact in the same signaling pathway in the brain, and that the two mutations produce the same biological effect. The findings suggest that this pathway might represent a new target for understanding and potentially treating eating disorders.

“If you’re considering two randomly discovered genes, the chance that they will interact is small. But, what really sealed the deal for us that the association was real was that the mutations have the same effect,” says Michael Lutter, UI assistant professor of psychiatry and senior author of the study.

Overall, the study, published Oct. 8 in the Journal of Clinical Investigation, suggests that mutations that decrease the activity of a transcription factor—a protein that turns on the expression of other genes—called estrogen-related receptor alpha (ESRRA) increase the risk of eating disorders.

The challenge of finding genes for complex diseases

Anorexia nervosa and bulimia nervosa are fairly common, especially among women. They affect between 1 and 3 percent of women. They also are among the most lethal of all psychiatric diseases; about 1 in 1,000 women will die from anorexia.

On the other end of the spectrum are very rare gene variants, which confer an almost 100 percent risk of getting the disease. To track down these variants, researchers turn to large families that are severely affected by an illness.

Lutter and his colleagues were able to work with two such families to identify the two new genes associated with eating disorders.

“It’s basically a matter of finding out what the people with the disorder share in common that people without the disease don’t have,” Lutter explains. “From a theoretical perspective, it’s straightforward. But the difficulty comes in having a large enough group to find these rare genes. You have to have large families to get the statistical power.”

In the new study, 20 members from three generations of one family (10 affected individuals and 10 unaffected), and eight members of a second family (six affected and two unaffected) were analyzed.

The gene discovered in the larger family was ESRRA, a transcription factor that turns on the expression of other genes. The mutation associated with eating disorders decreases ESSRA activity.

The gene found in the second family is a transcriptional repressor called histone deacetylase 4 (HDAC4), which turns off transcription factors, including ESRRA. This mutation is unusual in the sense that it increases the gene’s activity—most mutations decrease or destroy a gene’s activity.

Importantly, the team also found that the two affected proteins interacted with one another; HDAC4 binds to ESRRA and inhibits it.

The two genes are already known to be involved in metabolic pathways in muscle and fat tissue. They also are both regulated by exercise.

In the brain, HDAC4 is very important for regulating genes that form connections between neurons. However, there’s almost nothing known about ESRRA in the brain, although it is expressed in many brain regions that are disrupted in anorexia.

Lutter and his colleagues plan to study the role of these genes in mice and in cultured neurons to find out exactly what they are doing in the brain. They will also look for ways to modify the genes’ activity, with the long-term goal of finding small molecules that might be developed into therapies for eating disorders.

They also plan to study patients with eating disorders and see if other genes associated with the ESSRA/HDAC4 brain pathway are affected in humans.

Notes about this neurogenetics and eating disorder research