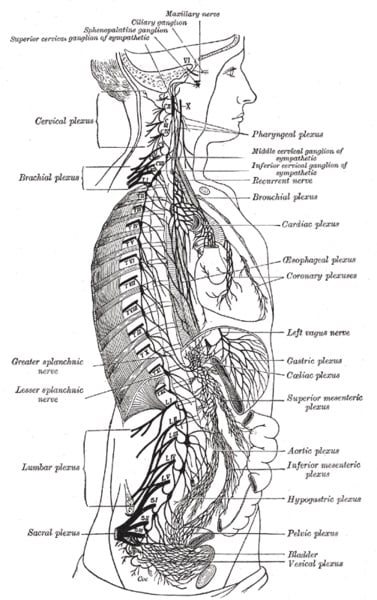 Repeated stress triggers the sympathetic nervous system and stimulates the production of new blood cells. While this response is vital for survival, prolonged activation over extended periods of time can have negative health effects. This image shows the right sympathetic chain and its connections with the thoracic, abdominal, and pelvic plexuses. Credit provided below.
Home
Featured

Effects of Chronic Stress Can be Traced to Your Genes

New research shows that chronic stress changes gene activity in immune cells before they reach the bloodstream. With these changes, the cells are primed to fight an infection or trauma that doesn’t actually exist, leading to an overabundance of the inflammation that is linked to many health problems.

This is not just any stress, but repeated stress that triggers the sympathetic nervous system, commonly known as the fight-or-flight response, and stimulates the production of new blood cells. While this response is important for survival, prolonged activation over an extended period of time can have negative effects on health.

A study in animals showed that this type of chronic stress changes the activation, or expression, of genes in immune cells before they are released from the bone marrow. Genes that lead to inflammation are expressed at higher-than-normal levels, while the activation of genes that might suppress inflammation is diminished.

Ohio State University scientists made this discovery in a study of mice. Their colleagues from other institutions, testing blood samples from humans living in poor socioeconomic conditions, found that similarly primed immune cells were present in these chronically stressed people as well.

“The cells share many of the same characteristics in terms of their response to stress,” said John Sheridan, professor of oral biology in the College of Dentistry and associate director of Ohio State’s Institute for Behavioral Medicine Research (IBMR), and co-lead author of the study. “There is a stress-induced alteration in the bone marrow in both our mouse model and in chronically stressed humans that selects for a cell that’s going to be pro-inflammatory.

“So what this suggests is that if you’re working for a really bad boss over a long period of time, that experience may play out at the level of gene expression in your immune system.”

The findings suggest that drugs acting on the central nervous system to treat mood disorders might be supplemented with medications targeting other parts of the body to protect health in the context of chronic social stress.

Steven Cole, a professor of medicine and a member of the Cousins Center for Psychoneuroimmunology at UCLA, is a co-corresponding author of the study. The research is published in a recent issue of the journal Proceedings of the National Academy of Sciences.

The mind-body connection is well established, and research has confirmed that stress is associated with health problems. But the inner workings of that association – exactly how stress can harm health – are still under investigation.

Sheridan and colleagues have been studying the same mouse model for a decade to reveal how chronic stress – and specifically stress associated with social defeat – changes the brain and body in ways that affect behavior and health.

The mice are repeatedly subjected to stress that might resemble a person’s response to persistent life stressors. In this model, male mice living together are given time to establish a hierarchy, and then an aggressive male is added to the group for two hours at a time. This elicits a “fight or flight” response in the resident mice as they are repeatedly defeated by the intruder.

“These mice are chronically in that state, so our research question is, ‘What happens when you stimulate the sympathetic nervous system over and over and over, or continuously?’ We see deleterious consequences to that,” Sheridan said.

Under normal conditions, the bone marrow in animals and humans is making and releasing billions of red blood cells every day, as well as a variety of white blood cells that constitute the immune system. Sheridan and colleagues already knew from previous work that stress skews this process so that the white blood cells produced in the bone marrow are more inflammatory than normal upon their release – as if they are ready to defend the body against an external threat.

A typical immune response to a pathogen or other foreign body requires some inflammation, which is generated with the help of immune cells. But when inflammation is excessive and has no protective or healing role, the condition can lead to an increased risk for cardiovascular diseases, diabetes and obesity, as well as other disorders.

In this work, the researchers compared cells circulating in the blood of mice that had experienced repeated social defeat to cells from control mice that were not stressed. The stressed mice had an average fourfold increase in the frequency of immune cells in their blood and spleen compared to the normal mice.

Genome-wide analysis of these cells that had traveled to the spleen in the stressed mice showed that almost 3,000 genes were expressed at different levels – both higher and lower – compared to the genes in the control mice. Many of the 1,142 up-regulated genes in the immune cells of stressed mice gave the cells the power to become inflammatory rapidly and efficiently.

“There is no traditional viral or bacterial challenge – we’re generating the challenge via a psychological response,” said study first author Nicole Powell, a research scientist in oral biology at Ohio State. “This study provides a nice mechanism for how psychology impacts biology. Other studies have indicated that these cells are more inflammatory; our work shows that these cells are primed at the level of the gene, and it’s directly due to the sympathetic nervous system.”

Scientists Hit Their Creative Peak Early in Their Careers

Meanwhile, UCLA’s Cole performs specialized statistical analyses of genome function to determine how people’s perception of their surroundings affects their biology. He and colleagues analyzed blood samples both from Sheridan’s mice and from healthy young adult humans whose socioeconomic status had been previously characterized as either high or low.

The human analysis identified differing levels of expression of 387 genes between the low- and high-socioeconomic status adults – and as in the mice, the up-regulated genes were pro-inflammatory in nature. The researchers also noted that almost a third of the genes with altered expression levels in immune cells from chronically stressed humans were the same genes differentially expressed in mice that had experienced repeated social defeat – a much higher similarity than would occur by chance.

This same pro-inflammatory immune-cell profile has been seen in research on parents of children with cancer.

“What we see in this study is a convergence of animal and human data showing similar genomic responses to adversity,” Cole said. “The molecular information from animal research integrates nicely with the human findings in showing a significant up-regulation of pro-inflammatory genes as a consequence of stress – and not just experimental stress, but authentic environmental stressors humans experience in everyday life.”

Notes about this chronic stress and neurogenetics research

This work was supported by the National Institutes of Health; the Mind, Body, Brain and Health Initiative of the John D. and Catherine T. MacArthur Foundation; the British Columbia Ministry of Child and Family Development via the Human Early Learning Partnership; and the Allergy, Genes and Environment Research Network.

Additional co-authors are Erica Sloan of UCLA and the Monash Institute of Pharmaceutical Sciences in Australia; Michael Bailey (associate professor of oral biology) and Brenda Reader of Ohio State’s IBMR; Jesusa Arevalo of UCLA; Gregory Miller and Edith Chen of Northwestern University; and Michael Kobor of the University of British Columbia.