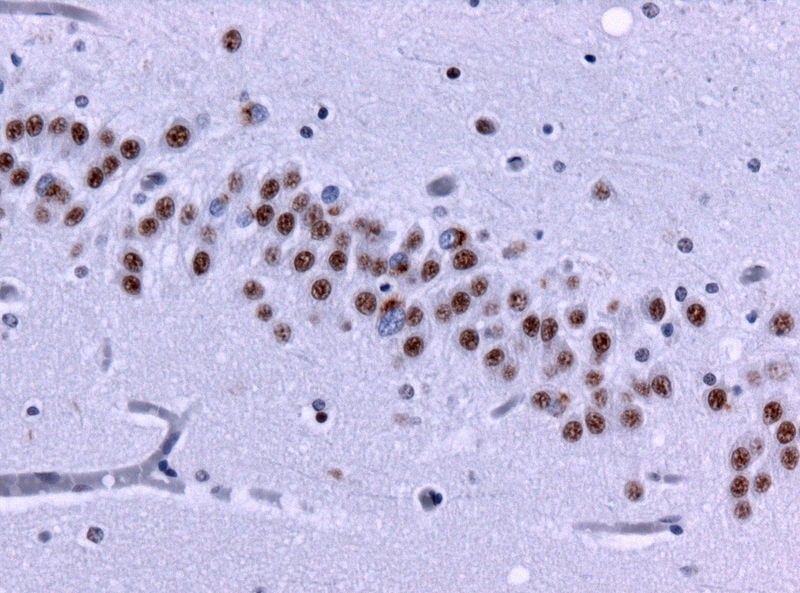 Researchers turned skin cells from ALS patients into motor neurons which retained the genetic defects associated with the disease. They focused on the C9ORF72 gene, which was recently found to be a common cause of familial ALS and frontotemporal lobar degeneration. The image is an autopsy specimen of a patient with frontotemporal dementa: Immunostaining of TDP43 in the hippocampal dentate gyrus shows that some neurons contain cytoplasmatic inclusions instead of normal neuronal nuclear staining.
Home
Featured

Although the technology has existed for just a few years, scientists increasingly use “disease in a dish” models to study genetic, molecular and cellular defects. But a team of doctors and scientists led by researchers at the Cedars-Sinai Regenerative Medicine Institute went further in a study of Lou Gehrig’s disease, a fatal disorder that attacks muscle-controlling nerve cells in the brain and spinal cord.

After using an innovative stem cell technique to create neurons in a lab dish from skin scrapings of patients who have the disorder, the researchers inserted molecules made of small stretches of genetic material, blocking the damaging effects of a defective gene and, in the process, providing “proof of concept” for a new therapeutic strategy – an important step in moving research findings into clinical trials.

The study, published Oct. 23 in Science Translational Medicine, is believed to be one of the first in which a specific form of Lou Gehrig’s disease, or amyotrophic lateral sclerosis, was replicated in a dish, analyzed and “treated,” suggesting a potential future therapy all in a single study.

“In a sense, this represents the full spectrum of what we are trying to accomplish with patient-based stem cell modeling. It gives researchers the opportunity to conduct extensive studies of a disease’s genetic and molecular makeup and develop potential treatments in the laboratory before translating them into patient trials,” said Robert H. Baloh, MD, PhD, director of Cedars-Sinai’s Neuromuscular Division in the Department of Neurology and director of the multidisciplinary ALS Program. He is the lead researcher and the article’s senior author.

Laboratory models of diseases have been made possible by a recently invented process using induced pluripotent stem cells – cells derived from a patient’s own skin samples and “sent back in time” through genetic manipulation to an embryonic state. From there, they can be made into any cell of the human body.

The cells used in the study were produced by the Induced Pluripotent Stem Cell Core Facility of Cedars-Sinai’s Regenerative Medicine Institute. Dhruv Sareen, PhD, director of the iPSC facility and a faculty research scientist with the Department of Biomedical Sciences, is the article’s first author and one of several institute researchers who participated in the study.

“In these studies, we turned skin cells of patients who have ALS into motor neurons that retained the genetic defects of the disease,” Baloh said. “We focused on a gene, C9ORF72, that two years ago was found to be the most common cause of familial ALS and frontotemporal lobar degeneration, and even causes some cases of Alzheimer’s and Parkinson’s disease. What we needed to know, however, was how the defect triggered the disease so we could find a way to treat it.”

Frontotemporal lobar degeneration is a brain disorder that typically leads to dementia and sometimes occurs in tandem with ALS.

The researchers found that the genetic defect of C9ORF72 may cause disease because it changes the structure of ribonucleic acid (RNA) coming from the gene, creating an abnormal buildup of a repeated set of nucleotides, the basic components of RNA.

“We think this buildup of thousands of copies of the repeated sequence GGGGCC in the nucleus of patients’ cells may become “toxic” by altering the normal behavior of other genes in motor neurons,” Baloh said. “Because our studies supported the toxic RNA mechanism theory, we used two small segments of genetic material called antisense oligonucleotides – ASOs – to block the buildup and degrade the toxic RNA. One ASO knocked down overall C9ORF72 levels. The other knocked down the toxic RNA coming from the gene without suppressing overall gene expression levels. The absence of such potentially toxic RNA, and no evidence of detrimental effect on the motor neurons, provides a strong basis for using this strategy to treat patients suffering from these diseases.”

Researchers from another institution recently led a phase one trial of a similar ASO strategy to treat ALS caused by a different genetic mutation and reportedly uncovered no safety issues.

Notes about this ALS and neurogenetics research

Clive Svendsen, PhD, director of the Regenerative Medicine Institute and one of the article’s authors, has studied ALS for more than a decade. “ALS may be the cruelest, most severe neurological disease, but I believe the stem cell approach used in this collaborative effort holds the key to unlocking the mysteries of this and other devastating disorders. Within the Regenerative Medicine Institute, we are exploring several other stem cell-based strategies in search of treatments and cures,” he said, adding that ALS affects 30,000 to 50,000 people in the U.S., but unlike other neurodegenerative diseases, it is almost always fatal, usually within three to five years.

Svendsen recently received a $17.8 million grant from the California Institute for Regenerative Medicine. In collaboration with Baloh and the ALS clinical team at Cedars-Sinai, this study will support a novel stem cell and growth factor therapy for ALS.

Researchers from UCLA; the Mayo Clinic in Jacksonville, Fla.; the University of California, San Diego; Washington University School of Medicine in St. Louis, Mo.; and Isis Pharmaceuticals contributed to the C9ORF72 study.

The research was supported by National Institutes of Health grants NS055980, NS069669, NIH-U24NS07837; and California Institute of Regenerative Medicine grant RT2-02040. Baloh holds a Career Award for Medical Scientists from the Burroughs Wellcome Fund. Analytical work was partially supported by the UCLA Muscular Dystrophy Core Center funded by the National Institute of Arthritis, Musculoskeletal and Skin Disorders (P30 AR057230) within the Center for Duchenne Muscular Dystrophy at UCLA.