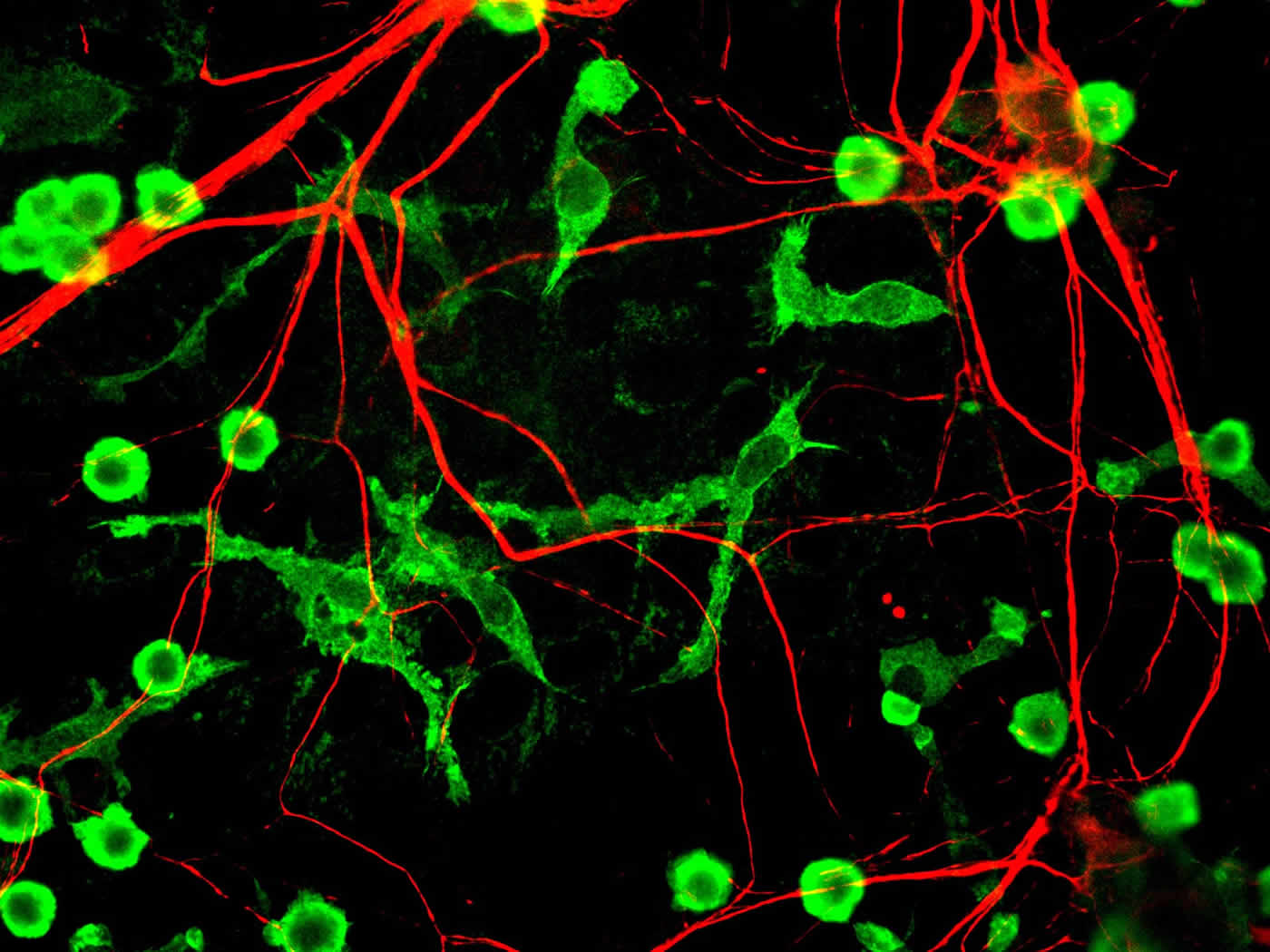 Microglia, like macrophages in the body, are known for their ability to ingest trash and infectious agents in the brain, and their highly acidic interior gets rids of it, which helps support the function and health of neurons. Image is for illustrative purposes only. Credit: GerryShaw.

When a high-fat diet causes us to become obese, it also appears to prompt normally bustling immune cells in our brain to become sedentary and start consuming the connections between our neurons, scientists say.

The good news is going back on a low-fat diet for just two months, at least in mice, reverses this trend of shrinking cognitive ability as weight begins to normalize, said Dr. Alexis M. Stranahan, neuroscientist in the Department of Neuroscience and Regenerative Medicine at the Medical College of Georgia.

“Microglia eating synapses is contributing to synapse loss and cognitive impairment in obesity,” Stranahan said. “On the one hand, that is very scary, but it’s also reversible, meaning that if you go back on a low-fat diet that does not even completely wipe out the adiposity, you can completely reverse these cellular processes in the brain and maintain cognition.”

Stranahan is corresponding author of the study in the journal Brain, Behavior, and Immunity, which provides some of the first evidence of why fat is bad for the brain.

The trouble appears to start with too much fat in the body producing chronic inflammation, which stimulates microglia to have an autoimmune response. Microglia, like macrophages in the body, are known for their ability to ingest trash and infectious agents in the brain, and their highly acidic interior gets rids of it, which helps support the function and health of neurons. But as mice get obese, their microglia seem focused on overeating.

“Normally in the brain, microglia are constantly moving around. They are always moving around their little fingers and processes. What happens in obesity is they stop moving,” Stranahan said. “They draw in all their processes; they basically just sit there and start eating synapses. When microglia start eating synapses, the mice don’t learn as effectively,” Stranahan said.

The study looked at normal male mice: One group ate a diet in which about 10 percent of the calories came from saturated fat, and another consumed chow that was 60 percent fat. To ensure other factors were equal, the researchers chose chows that had similar levels of other key ingredients such as macronutrients and protein. The chows were on par with a healthy diet versus a fast-food diet in humans. “If you look at the lipid breakdown for the two diets, these guys are getting crazy, crazy amounts,” Stranahan said of the high-fat-fare mice.

At four, eight and 12 weeks, the MCG scientists took a series of metabolic measures, such as weight, food intake, insulin and serum glucose levels. They also measured in the hippocampus, the center of learning and memory, levels of synaptic markers, proteins found at synapses that correlate with the number of synapses.

“This gives us a window into what is occurring at the level of the synapse and also microglial activation,” Stranahan said. And, they measured levels of inflammatory cytokines, which microglia produce when “they start getting activated and angry.”

All levels in both groups were essentially the same at four weeks. The mice on a high-fat diet were fatter, but other measures were normal at eight weeks. By 12 weeks the fat-eating mice were obese, had elevated cytokine levels and a reduction in the markers for synapse number and function.

“When you get out to 12 weeks, you start seeing great increases in peripheral obesity. While you don’t see insulin resistance, you also start seeing loss of synapses and increases in inflammatory cytokines in the brain,” Stranahan said.

At that point, the research team switched half the mice on the high-fat diet to the low-fat regimen. It took about two months for their weight to return to normal, although their overall fat pad remained larger than their peers who had never gained weight. That fat layer makes it easier to gain weight in the future, Stranahan notes. As with most people, the mice that remained on the low-fat diet slowly accumulated a little weight as they aged.

Meanwhile, the group that stayed on the high-fat diet kept getting fatter, more inflamed and losing synapses, she said. Their microglia’s little processes, or protrusions, which normally help monitor synaptic function and help these cells move, continued to wither. Dendritic spines on neurons, which get input from synapses, similarly withered on the high-fat diet, but like the microglia processes, were restored with the lower-fat fare.

“That is very promising,” said Stranahan. The findings also point to some potential new purposes for existing drugs now used for conditions such as rheumatoid arthritis and Crohn’s disease, which block specific inflammatory cytokines and tumor necrosis factor alpha, both of which are elevated in the brains of the fat mice.

Obesity yields extreme overkill in microglia, which are typically extremely discriminating and helpful to neurons. During development, for example, they will prune a synapse that isn’t functioning. “That is one way the developing brain refines itself. It allows you to keep only those synapses that you need or the synapses you have been using. Fat dramatically alters their dynamic.

“Instead of doing garbage disposal, they are taking your mailbox, your front door, your kitchen sink and all the stuff that you need, and not doing their job of getting rid of trash,” Stranahan said.

She notes that the high-fat-eating mice actually ate less chow and consumed the same amount of calories as mice eating low fat. “The entire metabolic phenotype is driven by diet composition rather than the amount of calories,” Stranahan said. If high-fat-eating mice had greater variety in their diet, such as a sugar-water option, they might also consume more total calories, similar to the sensory-specific satiety phenomenon in humans, she said.

Obesity increases risk of age-related cognitive decline and is accompanied by peripheral inflammation. Studies in rodent models of obesity have demonstrated that impaired hippocampal function correlates with microglial activation, but the possibility that neuron/microglia interactions might be perturbed in obesity has never been directly examined. The goal of this study was to determine whether high fat diet-induced obesity promotes synaptic stripping by microglia, and whether any potential changes might be reversible by a return to low-fat diet (LFD). Time course experiments revealed that hippocampal inflammatory cytokine induction and loss of synaptic protein expression were detectable after three months of HFD, therefore subsequent groups of mice were maintained on HFD for three months before being switched to LFD for an additional two months on LFD (HFD/LFD). Additional HFD mice continued to receive HFD during this period (HFD/HFD), while another group of mice were maintained on LFD throughout the experiment (LFD/LFD). Dietary obesity impaired hippocampus-dependent memory, reduced long-term potentiation (LTP), and induced expression of the activation marker major histocompatibility complex II (MHCII) in hippocampal microglia. Diet reversal only partially attenuated increases in adiposity in HFD/LFD mice, but plasticity deficits and MHCII induction were normalized to within the range of LFD/LFD mice. Microglial activation and deficits in hippocampal function were accompanied by perturbation of spatial relationships between microglial processes and synaptic puncta. Analysis of primary microglia isolated from HFD/HFD mice revealed selective increases in internalization of synaptosomes labeled with a pH-sensitive fluorophore. Taken together, these findings indicate that dietary obesity reversibly impairs hippocampal function, and that deficits may be attributable to synaptic stripping by microglia.