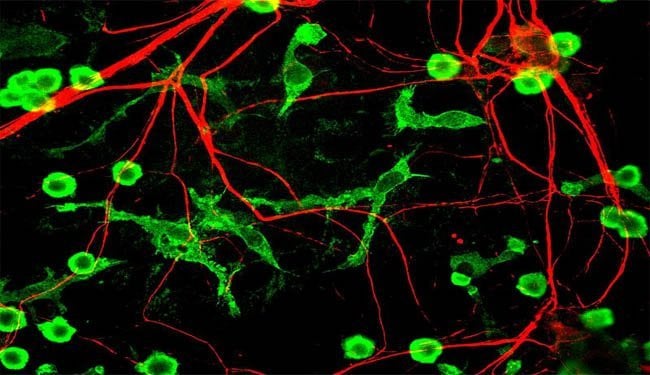 We’re born with our brains prewired, but as information comes in from our environment, this circuitry is updated. A study from Boston Children’s Hospital provides a new glimpse of how this happens: Brain cells known as microglia, tuned into the crosstalk between neurons, literally engulf unnecessary connections, known as synapses, and prune them away.

The study, led by Beth Stevens, PhD, and Dori Schafer, PhD, of the Department of Neurology and the F.M. Kirby Neurobiology Center at Boston Children’s Hospital, is the first to capture microglia, previously thought of as immune cells, in the act of eliminating synapses in the healthy, developing brain. The study further shows that microglia take their cues from neurons’ activity patterns and from a set of signals called the complement cascade, used by the immune system to rid the body of unwanted pathogens and debris. When complement signaling is disrupted, pruning of synapses is diminished.

Microglia were once thought to play mainly a supportive role in the brain, protecting against disease. Only recently have scientists begun to recognize their involvement in healthy brain development.

“They’re gatekeepers that are extremely responsive to changes in the environment,” says Stevens, senior investigator on the study. “They’re in the brain all the time it’s wiring up, and they can move and sense changes in activity.”

Stevens first showed in 2007 that defects in the complement system inhibit pruning of synapses, and that neurons are loaded with complement proteins soon after birth, just when pruning is at its peak. In the new paper, she and Schafer demonstrate that microglia have receptors that recognize the complement protein C3 – the same protein found on synapses that are destined for elimination.

“We think that weaker synapses are being tagged with C3, and that microglia are eliminating them just as macrophages would eliminate bacteria,” says Schafer, first author on the paper. “C3 is like an ‘eat me’ signal.”

Mice lacking C3 receptors, or whose microglia had these receptors blocked with a drug, did not eliminate weaker synapses, the researchers showed.

Because microglia are so active, the researchers tracked their activity in mice, using dyes as tracers, and focused on the visual system connecting the eyes and brain, because it is well understood and relatively easy to manipulate.

Stevens thinks that their findings might shed light on diseases that involve synapse loss or dysfunction. In neurodegenerative diseases such as glaucoma, Alzheimer’s disease, Lou Gehrig’s disease, Huntington’s disease and Parkinson’s disease, scientists have noted subtle changes in synapses that might cause them to be targeted for elimination. In the healthy adult brain, microglia are in a resting state, but in these diseases, both microglia and the complement system become activated. Stevens and Schafer speculate that targeting microglia, their complement receptors or complement proteins themselves could prevent synapse loss in these diseases.

There are also data suggesting that microglia and/or the complement cascade may be involved in neurodevelopmental disorders such as autism, epilepsy or schizophrenia, perhaps altering the brain’s normal balance of synapses.

“All this is still very speculative,” Stevens cautions. “We first need to understand normal development.”