Summary: MIT researchers have identified a brain network that allows the brain to record memories of new places.

When you enter a room, your brain is bombarded with sensory information. If the room is a place you know well, most of this information is already stored in long-term memory. However, if the room is unfamiliar to you, your brain creates a new memory of it almost immediately.

MIT neuroscientists have now discovered how this occurs. A small region of the brainstem, known as the locus coeruleus, is activated in response to novel sensory stimuli, and this activity triggers the release of a flood of dopamine into a certain region of the hippocampus to store a memory of the new location.

“We have the remarkable ability to memorize some specific features of an experience in an entirely new environment, and such ability is crucial for our adaptation to the constantly changing world,” says Susumu Tonegawa, the Picower Professor of Biology and Neuroscience and director of the RIKEN-MIT Center for Neural Circuit Genetics at the Picower Institute for Learning and Memory.

“This study opens an exciting avenue of research into the circuit mechanism by which behaviorally relevant stimuli are specifically encoded into long-term memory, ensuring that important stimuli are stored preferentially over incidental ones,” adds Tonegawa, the senior author of the study.

Akiko Wagatsuma, a former MIT research scientist, is the lead author of the study, which appears in the Proceedings of the National Academy of Sciences the week of Dec. 25.

In a study published about 15 years ago, Tonegawa’s lab found that a part of the hippocampus called the CA3 is responsible for forming memories of novel environments. They hypothesized that the CA3 receives a signal from another part of the brain when a novel place is encountered, stimulating memory formation.

They believed this signal to be carried by chemicals known as neuromodulators, which influence neuronal activity. The CA3 receives neuromodulators from both the locus coeruleus (LC) and a region called the ventral tegmental area (VTA), which is a key part of the brain’s reward circuitry. The researchers decided to focus on the LC because it has been shown to project to the CA3 extensively and to respond to novelty, among many other functions.

The LC responds to an array of sensory input, including visual information as well as sound and odor, then sends information on to other brain areas, including the CA3. To uncover the role of LC-CA3 communication, the researchers genetically engineered mice so that they could block the neuronal activity between those regions by shining light on neurons that form the connection.

To test the mice’s ability to form new memories, the researchers placed the mice in a large open space that they had never seen before. The next day, they placed them in the same space again. Mice whose LC-CA3 connections were not disrupted spent much less time exploring the space on the second day, because the environment was already familiar to them. However, when the researchers interfered with the LC-CA3 connection during the first exposure to the space, the mice explored the area on the second day just as much as they had on the first. This suggests that they were unable to form a memory of the new environment.

The LC appears to exert this effect by releasing the neuromodulator dopamine into the CA3 region, which was surprising because the LC is known to be a major source of norepinephrine to the hippocampus. The researchers believe that this influx of dopamine helps to boost CA3’s ability to strengthen synapses and form a memory of the new location.

They found that this mechanism was not required for other types of memory, such as memories of fearful events, but appears to be specific to memory of new environments. The connections between the LC and CA3 are necessary for long-term spatial memories to form in CA3.

“The selectivity of successful memory formation has long been a puzzle,” says Richard Morris, a professor of neuroscience at the University of Edinburgh, who was not involved in the research. “This study goes a long way toward identifying the brain mechanisms of this process. Activity in the pathway between the locus coeruleus and CA3 occurs most strongly during novelty, and it seems that activity fixes the representations of everyday experience, helping to register and retain what’s been happening and where we’ve been.”

This mechanism likely evolved as a way to help animals survive, allowing them to remember new environments without wasting brainpower on recording places that are already familiar, the researchers say. 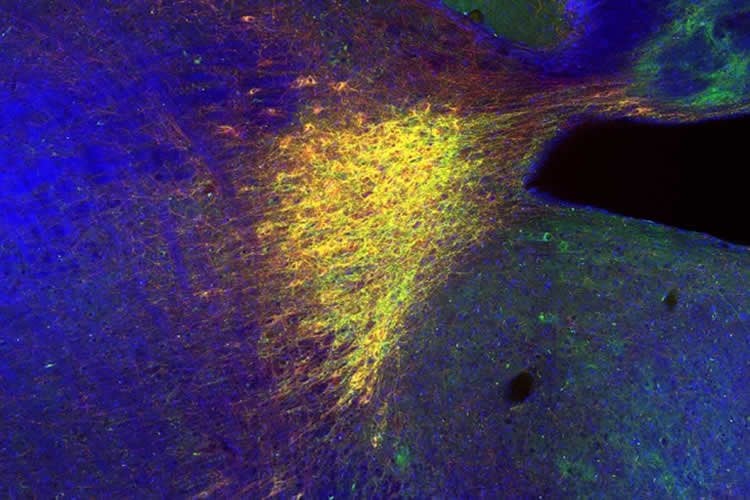 “When we are exposed to sensory information, we unconsciously choose what to memorize. For an animal’s survival, certain things are necessary to be remembered, and other things, familiar things, probably can be forgotten,” Wagatsuma says.

Still unknown is how the LC recognizes that an environment is new. The researchers hypothesize that some part of the brain is able to compare new environments with stored memories or with expectations of the environment, but more studies are needed to explore how this might happen.

“That’s the next big question,” Tonegawa says. “Hopefully new technology will help to resolve that.”

The memory for a new episode is formed immediately upon experience and can last up to a lifetime. It has been shown that the hippocampal network plays a fundamental role in the rapid acquisition of a memory of a one-time experience, in which the novelty component of the experience promotes the prompt formation of the memory. However, it remains unclear which neural circuits convey the novelty signal to the hippocampus for the single-trial learning. Here, we show that during encoding neuromodulatory input from locus coeruleus (LC) to CA3, but not CA1 or to the dentate gyrus, is necessary to facilitate novel contextual learning. Silencing LC activity during exposure to a novel context reduced subsequent reactivation of the engram cell ensembles in CA3 neurons and in downstream CA1 upon reexposure to the same context. Calcium imaging of the cells reactivated in both novel and familiar contexts revealed that suppression of LC inputs at the time of encoding resulted in more variable place fields in CA3 neurons. These results suggest that neuromodulatory input from LC to CA3 is crucial for the formation of a persistent memory in the hippocampus.