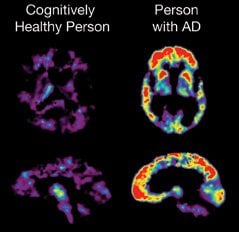 Using the imaging agent that enables detection of the plaques in the brain, the researchers conducted PET scans of 555 participants in the Alzheimer’s Disease Neuroimaging Initiative, a long-term public-private research project that includes people at risk for Alzheimer’s disease and patients who have been diagnosed with the disease as well as participants with no symptoms.
Home
Featured

A study combining genetic data with brain imaging, designed to identify genes associated with the amyloid plaque deposits found in Alzheimer’s disease patients, has not only identified the APOE gene, long associated with development of Alzheimer’s, but has uncovered an association with a second gene, called BCHE.

A national research team, led by scientists at the Indiana University School of Medicine, reported the results of the study in an article in Molecular Psychiatry. The study is believed to be the first genome-wide association study of plaque deposits using a specialized PET scan tracer that binds to amyloid.

The research also is believed to be the first to implicate variations in the BCHE gene in plaque deposits visualized in living individuals who have been diagnosed with Alzheimer’s disease or are at-risk for developing the disease. The enzyme coded by the BCHE gene has previously been studied in post-mortem brain tissue and is known to be found in plaques.

“The findings could recharge research efforts studying the molecular pathways contributing to amyloid deposits in the brain as Alzheimer’s disease develops and affects learning and memory,” said Vijay K. Ramanan, the paper’s first author and an M.D./Ph.D. student at the IU School of Medicine.

The BCHE gene finding “brings together two of the major hypotheses about the development of Alzheimer’s disease,” said Andrew J. Saykin, Psy.D., Raymond C. Beeler Professor of Radiology and Imaging Sciences at IU and principal investigator for the genetics core of the Alzheimer’s Disease Neuroimaging Initiative.

Scientists have long pointed to the loss of an important brain neurotransmitter, acetylcholine, which is depleted early in the development of the disease, as a key aspect of the loss of memory related neurons. The BCHE gene is responsible for an enzyme that breaks down acetylcholine in the brain. The other major Alzheimer’s hypothesis holds that the development of the amyloid plaques is the primary cause of the disease’s debilitating symptoms. As it turns out, the enzyme for which the BCHE gene codes is also found in significant quantities in those plaques.

“This study is connecting two of the biggest Alzheimer’s dots,” said Dr. Saykin, director of the Indiana Alzheimer Disease Center and the IU Center for Neuroimaging at the IU Health Neuroscience Center.

“The finding that BCHE gene variant predicts the extent of plaque deposit in PET scans among people at risk for Alzheimer’s disease is likely to reinvigorate research into drugs that could modify the disease by affecting the BCHE enzyme or its metabolic pathway,” he said. Some existing drugs inhibit this enzyme, but it is unclear whether this influences plaque deposits.

Overall, the results appear to offer scientists new potential targets for drugs to slow, reverse or even prevent the disease. Alzheimer’s disease affects an estimated 5.4 million Americans and has proven resistant to treatments that do more than temporarily slow the worsening of symptoms.

Amyloid plaque deposits build up abnormally in the brains of Alzheimer’s patients and are believed to play an important role in the memory loss and other problems that plague patients.

The study makes use of an imaging agent, florbetapir, now approved for use by the U.S. Food and Drug Administration, that allows physicians to see the level of plaque buildup in a patient’s brain, something that previously could be determined only with an autopsy.

In a genome-wide association study, researchers evaluate alternate versions of many genes to determine whether particular genetic variants are associated with a particular trait; in this case, the amounts of amyloid plaque deposits that the PET scans revealed in the brains of study participants.

Using the imaging agent that enables detection of the plaques in the brain, the researchers conducted PET scans of 555 participants in the Alzheimer’s Disease Neuroimaging Initiative, a long-term public-private research project that includes people at risk for Alzheimer’s disease and patients who have been diagnosed with the disease as well as participants with no symptoms.

With sophisticated statistical analyses, the imaging data was combined with analyses of DNA collected from the 555 participants to determine whether particular gene variants were found more often among patients with higher levels of plaque deposits.

Notes about this Alzheimer’s disease and genetics research

Data collection and sharing for this project was supported by the ADNI National Institutes of Health grant U01 AG024904. Funding sources for ADNI include the National Institute on Aging, the National Institute of Biomedical Imaging and Bioengineering, the U.S. Food and Drug Administration, the nonprofit partners of the Alzheimer’s Association, the Alzheimer’s Drug Discovery Foundation, and the Dana Foundation, and the following private-sector contributors: Abbott, AstraZeneca AB, Amorfix, Bayer Schering Pharma AG, Bioclinica Inc., Biogen Idec, Bristol-Myers Squibb, Eisai Global Clinical Development, Elan Corp., Genentech, GE Healthcare, Innogenetics, IXICO, Janssen Alzheimer Immunotherapy, Johnson and Johnson, Eli Lilly and Co., Medpace Inc., Merck and Co. Inc., Meso Scale Diagnostics LLC, Novartis AG, Pfizer Inc., F. Hoffmann-La Roche, Servier, Synarc Inc., and Takeda Pharmaceuticals. Private-sector contributions to ADNI are facilitated by the Foundation for the NIH (www.fnih.org). The grantee organization is the Northern California Institute for Research and Education. The study is coordinated by the Alzheimer’s Disease Cooperative Study at the University of California-San Diego, and ADNI data are disseminated by the Laboratory of Neuro Imaging at the University of California-Los Angeles. Additional ADNI support comes from the NIH grants P30 17 AG010129, K01 AG030514 and U24 AG21886. Data management and the specific analyses reported 18 in the paper were supported by NSF IIS-1117335 and NIH R01 AG19771, P30 AG10133, R01 LM011360, K24 19 AG027841 and K99 LM011384.