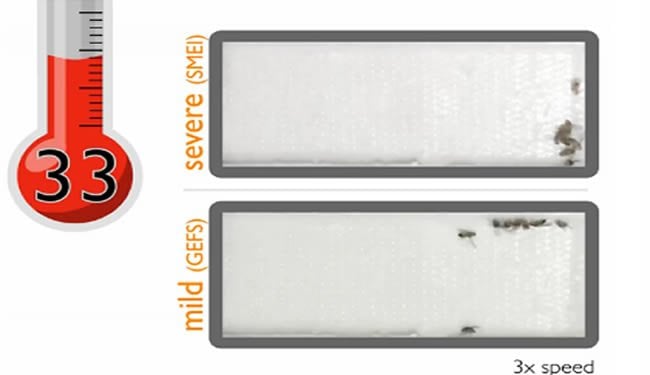 Scientists have observed the neurological mechanism behind temperature-dependent — febrile — seizures by genetically engineering fruit flies to harbor a mutation analogous to one that causes epileptic seizures in people. In addition to contributing the insight on epilepsy, their new study also highlights the first use of genetic engineering to swap a human genetic disease mutation into a directly analogous gene in a fly.

In a newly reported set of experiments that show the value of a particularly precise but difficult genetic engineering technique, researchers at Brown University and the University of California–Irvine have created a Drosophila fruit fly model of epilepsy to discern the mechanism by which temperature-dependent seizures happen.

The researchers used a technique called homologous recombination — a more precise and sophisticated technique than transgenic gene engineering — to give flies a disease-causing mutation that is a direct analogue of the mutation that leads to febrile epileptic seizures in humans. They observed the temperature-dependent seizures in whole flies and also observed the process in their brains. What they discovered is that the mutation leads to a breakdown in the ability of certain cells that normally inhibit brain overactivity to properly regulate their electrochemical behavior.

In addition to providing insight into the neurology of febrile seizures, said Robert Reenan, professor of biology at Brown and a co-corresponding author of the paper in the Journal of Neuroscience, the study establishes the fruit fly model as a viable genetic platform for the study of epilepsy and validates the use of homologous recombination, which could also be applied to other genetically linked diseases.

“This is the first time anyone has introduced a human disease-causing mutation overtly into the same gene that flies possess,” Reenan said.

In the video, fruit flies with a genetic tendency toward fever-induced seizures (top) are the first to stop moving freely and are swept aside by a gentle air current as the temperature rises. Credit: Reenan Lab/Brown University

Homologous recombination (HR) starts with the transgenic technique of harnessing a transposable element (jumping gene) to insert a specially mutated gene just anywhere into the fly’s DNA, but then goes beyond that to ultimately place the mutated gene into exactly the same position as the natural gene on the X chromosome. HR does this by outfitting the gene to be handled by the cell’s own DNA repair mechanisms, essentially tricking the cell into putting the mutant copy into exactly the right place. Reenan’s success with the technique allowed him to win a special grant from the National Institutes of Health last year.

The new paper is a result of that grant and Reenan’s collaboration with neurobiologist Diane O’Dowd at UC–Irvine. Reenan and undergraduate Jeff Gilligan used HR to insert a mutated version of the para gene in fruit flies that is a direct parallel of the mutation in the human gene SCN1A that causes febrile seizures in people.

When the researchers placed flies in tubes and bathed the tubes in 104-degree F water, the mutant fruit flies had seizures after 20 seconds in which their legs would begin twitching followed by wing flapping, abdominal curling, and an inability to remain standing. After that, they remained motionless for as long as half an hour before recovering. Unaltered flies, meanwhile, exhibited no temperature-dependent seizures.

The researchers also found that seizure susceptibility was dose-dependent. Female flies with mutant strains of both copies of the para gene (females have two copies of the X chromosome) were the most susceptible to seizures. Those in whom only one copy of the gene was a mutant were less likely than those with two to seize, but more likely than the controls.

While the researchers at Brown compared the seizure susceptibility of whole flies, O’Dowd, lead author Lei Sun, and colleagues at Irvine studied individual fly neurons implicated in seizure activity to see how they behaved as the brains were heated. What their measurements revealed in the mutant flies were flaws in how “GABAergic” neurons take in sodium through channels in the cell membrane. Under normal circumstances, the neurons inhibit brain overactivity. But the mutants’ mishandling of sodium led them to fail electrically.

“When [O’Dowd’s team] isolates those currents due to the sodium channel, which is what’s mutated in this case, and she compares the normal animals to the disease-model animals, what happens is the mutant channels pass too much current,” Reenan said. “The channels open too easily and they take more effort to close. They open too soon and they close too late. That effect is magnified at higher temperature. Then the neuron can’t send any [inhibitory] signals.”

With a useful genetic model of epilepsy in fruit flies, Reenan said he is optimistic that researchers can now look for potential treatments for the disease. The next step, he said, is to use the practice of “forward genetics” to look for further mutations that might counter febrile seizures.

Given thousands of flies with model of the disease, scientists can purposely subject them to different DNA-altering conditions and then look to see if any flies lose their propensity for seizures. Among those that do, the researchers can then identify the specific genetic alteration responsible and determine whether that could ever be clinically applied. For example, if it turns out that a mutation proves therapeutic because it causes a certain protein to be overexpressed, then perhaps that protein could be refined into some kind of biologic pharmaceutical.

Reenan said he’d expect to see researchers follow a similar roadmap for other diseases as well.

“Knock-in of specific disease-causing mutations into the fly genome has the potential to provide a rapid and low-cost platform for studying the cellular mechanisms of heritable human diseases,” the authors wrote. “In addition, knock-in flies can be used in combination with forward genetic screens to identify suppressor and/or enhancer mutations, a strategy that is challenging in humans and rodent models but well established in Drosophila.”

Notes about this epilepsy research

In addition to Reenan, Gilligan, O’Dowd and Sun, other authors are Cynthia Staber of Brown and Ryan Schutte and Vivian Nguyen of UC Irvine.

In addition to the National Institutes of Health, the Howard Hughes Medical Institue and the Ellison Medical Foundation funded the research.

Contact: David Orenstein – Brown University
Source: Brown University news release
Image Source: Fruit fly video image adapted from the video source below.
Video Source: Vimeo video from Brown University release with credit to Reenan Lab/Brown University.
Original Research: To appear in the Journal of Neuroscience. Abstract was not available at the time of this post. This information will be updated when it becomes available.