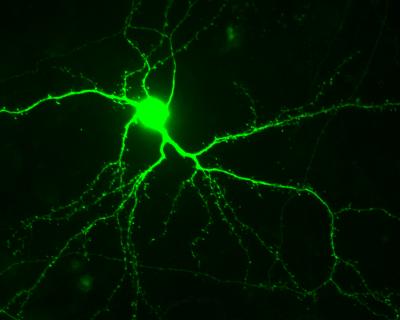 According to the study, nitric oxide not only damages neurons, the gaseous molecule also blocks the brain’s ability to self-repair. Credited to Sanford-Burnham Medical Research Institute.
Home
Featured

Nitric oxide, a gaseous molecule produced in the brain, can damage neurons. When the brain produces too much nitric oxide, it contributes to the severity and progression of stroke and neurodegenerative diseases such as Alzheimer’s. Researchers at Sanford-Burnham Medical Research Institute recently discovered that nitric oxide not only damages neurons, it also shuts down the brain’s repair mechanisms. Their study was published by the Proceedings of the National Academy of Sciences.

“In this study, we’ve uncovered new clues as to how natural chemical reactions in the brain can contribute to brain damage, loss of memory and cognitive function, in a number of diseases,” said Stuart A. Lipton, M.D., Ph.D., director of Sanford-Burnham’s Del E. Webb Neuroscience, Aging, and Stem Cell Research Center and a clinical neurologist.
Lipton led the study, along with Sanford-Burnham’s Tomohiro Nakamura, Ph.D., who added that these new molecular clues are important because “we might be able to develop a new strategy for treating stroke and other disorders if we can find a way to reverse nitric oxide’s effect on a particular enzyme in nerve cells.”

Learning and memory are in part controlled by NMDA-type glutamate receptors in the brain. These receptors are linked to pores in the nerve cell membrane that regulate the flow of calcium and sodium in and out of the nerve cells. When these NMDA receptors get over-activated, they trigger the production of nitric oxide. In turn, nitric oxide attaches to other proteins via a reaction called S-nitrosylation, which was first discovered by Lipton and colleagues. When those S-nitrosylated proteins are involved in cell survival and lifespan, nitric oxide can cause brain cells to die prematurely—a hallmark of neurodegenerative disease.

In their latest study, Lipton, Nakamura and colleagues used cultured neurons as well as a living mouse model of stroke to explore nitric oxide’s relationship with proteins that help repair neuronal damage. They found that nitric oxide reacts with the enzyme SHP-2 to inhibit a protective cascade of molecular events known as the ERK1/2 signaling pathway. Thus, nitric oxide not only damages neurons, it also blocks the brain’s ability to self-repair.