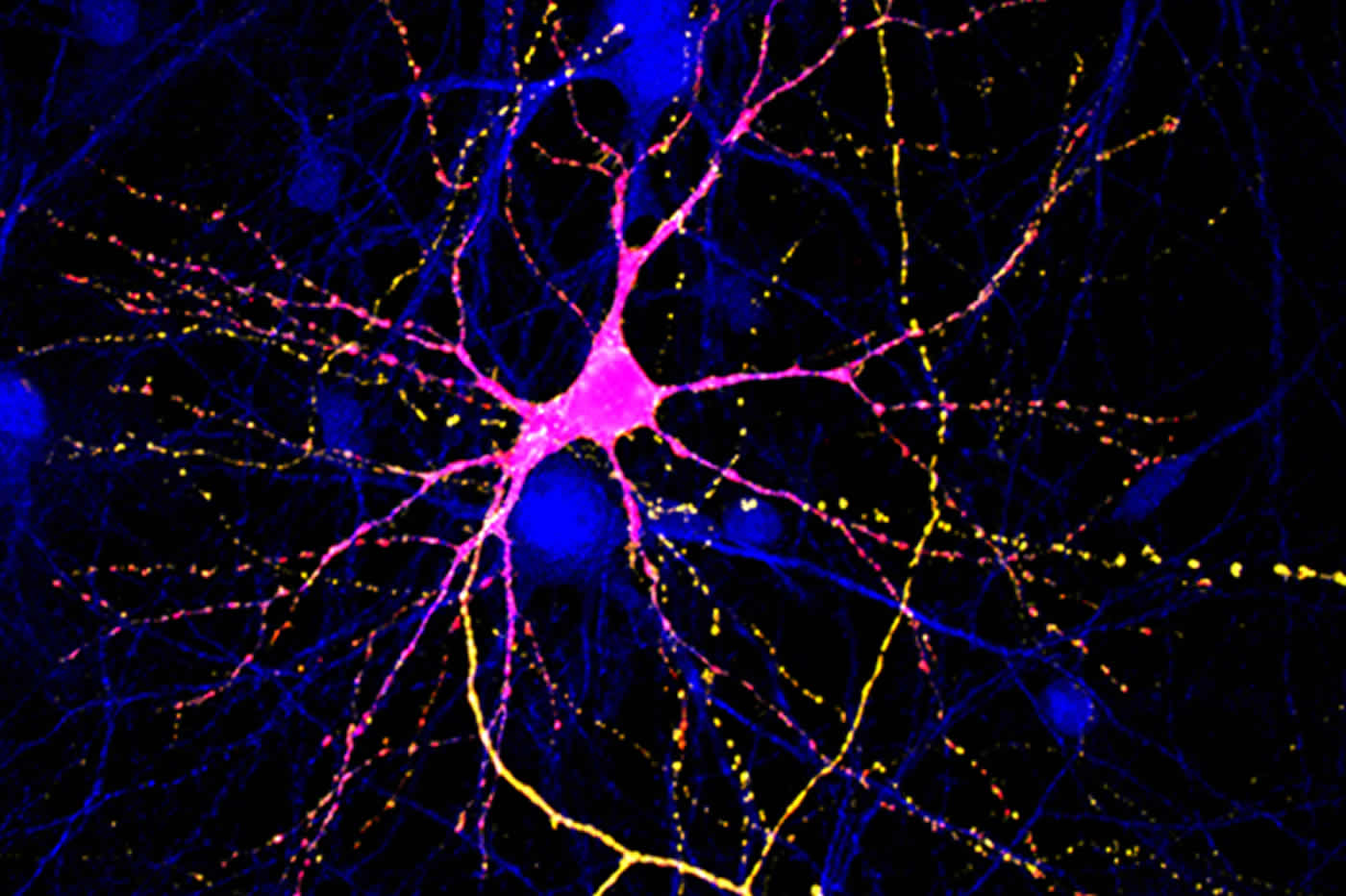 A neuron grown in a dish. Cannabinoid receptor 1 is found on the surface of the long, thin axon (yellow), but not the dendrites (purple) The image is credited to University of Bristol.

Summary: The secretory pathway delivery of cannabinoid type 1 receptor is axonally based, and surface expressed CB1R is more stable in axons than dendrites.

The brain contains about 100 billion nerve cells that are constantly communicating with one another at specialised junctions called synapses. Nerve cells possess extensions called axons, which send signals to synapses, and dendrites, which receive information from synapses.

CB1Rs help control information flow in the brain by binding molecules made in the brain called endocannabinoids, which influence brain functions such as pain, appetite, mood and memory. Unusually, endocannabinoid signalling goes in the reverse direction compared to most other neurotransmitters. The ‘receiving’ CB1Rs are located at presynaptic sites on axons, whereas the release sites are at postsynaptic sites on dendrites.

This reverse or ‘retrograde’ signalling that activates presynaptic CB1Rs ‘dampens down’ presynaptic release of other neurotransmitters resulting in a slowing of brain activity. Moreover, the active components of cannabis bind to CB1Rs in a similar manner to endocannabinoids, resulting in the ‘mellow’ sensation caused by the recreational use of cannabis.

For CB1Rs to regulate brain function properly, it is essential that they are sent to the right place on the surface of the axon. However, very little is known about exactly how this occurs. The research published today [Tuesday 30 April] in eLife investigated how this process happens.

The Bristol group showed that a specific part of the CB1R protein plays a key role in the getting CB1R into axons. The research team tracked newly made CB1Rs in nerve cells grown in a dish and found that a short region of CB1R is crucial for sending CB1R to the axon and preventing it from going to the dendrites. They also discovered that this region stabilises CB1R at the surface of the axon, making it more available to receive signals from endocannabinoids.

Jeremy Henley, Professor of Molecular Neuroscience in Bristol’s School of Biochemistry, said: “In recent years there has been tremendous interest in – and controversy about – activation of CB1R by medical marijuana. It is becoming increasingly apparent that activation of CB1Rs could be therapeutically useful for a wide range of diseases such as chronic pain, epilepsy, or multiple sclerosis. Understanding the fundamental properties of CB1R is an important basis for future studies exploring the efficacy and optimisation of these targeted approaches.”

It is hoped that this increased understanding of how CB1Rs behave in nerve cells will pave the way for future studies aimed at examining the possible medical uses of marijuana, or other drugs that target CB1Rs, in treating a wide range of disorders.

Cannabinoid type one receptor (CB1R) is only stably surface expressed in axons, where it downregulates neurotransmitter release. How this tightly regulated axonal surface polarity is established and maintained is unclear. To address this question, we used time-resolved imaging to determine the trafficking of CB1R from biosynthesis to mature polarised localisation in cultured rat hippocampal neurons. We show that the secretory pathway delivery of CB1R is axonally biased and that surface expressed CB1R is more stable in axons than in dendrites. This dual mechanism is mediated by the CB1R C-terminus and involves the Helix 9 (H9) domain. Removal of the H9 domain increases secretory pathway delivery to dendrites and decreases surface stability. Furthermore, CB1RΔH9 is more sensitive to agonist-induced internalisation and less efficient at downstream signalling than CB1RWT. Together, these results shed new light on how polarity of CB1R is mediated and indicate that the C-terminal H9 domain plays key roles in this process.