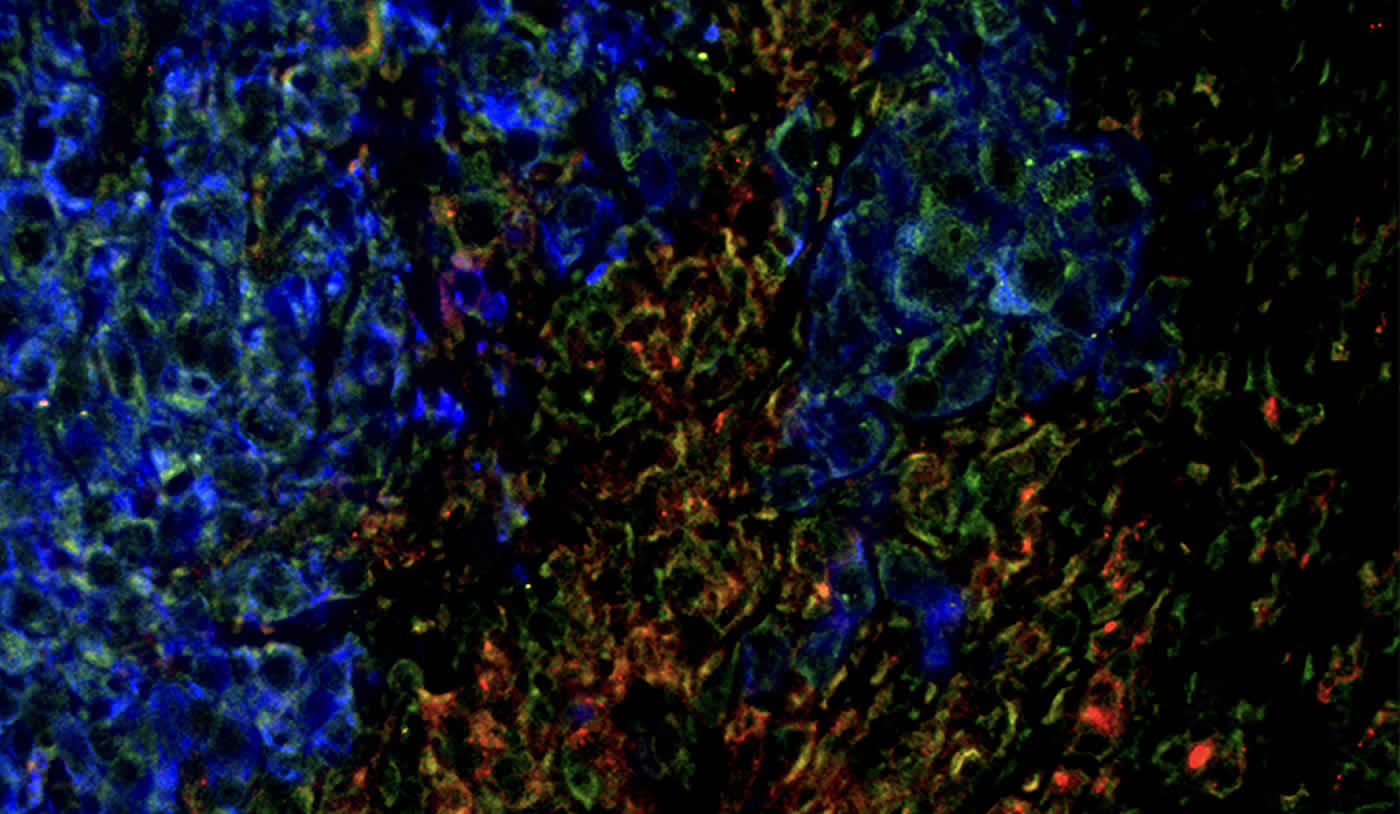 Shown are metastatic tumor cells (blue) with neuroinflammatory cells (green and red) in the brain. The image is credited to Yale.

Summary: Researchers discovered changes in thousands of genes induced by the tumor microenvironment. The study may help in identifying new biomarkers for the early detection, and subsequent treatment, of brain cancers.

In a new study, Yale Cancer Center scientists have demonstrated a powerful method to analyze how tumor cells are altered as they metastasize, or spread, to the brain. The research, published in the journal Cell Reports, may eventually improve early diagnosis and treatment of metastatic brain cancer, whose incidence is climbing and whose treatments are typically limited.

“Once tumors metastasize in the brain, most drug therapies are no longer effective,” said senior author Don Nguyen, associate professor of pathology at Yale Cancer Center. “There’s a big question whether that’s because those drugs are not getting into the brain, which is a difficult place for drugs to penetrate, or because additional mechanisms are at work.”

Emily Wingrove, a graduate student in his lab and co-lead author on the paper, took on this question with “xenograft” models of metastasis, in which human tumor cells were transferred into mice lacking an immune system. Wingrove and co-lead author Zongzhi Liu developed a system for extremely precise RNA sequencing of xenograft tissue samples to examine gene expression both in the human tumor cells and in the mouse cells. Gene expression drives the production of the proteins that shape a cell for its specific role in the body, such as a lung or muscle cell.

Experiments began in mice with a human lung cancer cell line that quickly metastasizes to the brain. The researchers analyzed how gene expression changed as the tumors began to grow and compared that to the expression of healthy brain tissue.

Overall, the scientists discovered a striking set of alterations in gene expression.

“We’re seeing changes in thousands of genes induced by the tumor microenvironment,” said Wingrove. “I would never have imagined that so many genes change just when you grow cells in a different context.”

After validating some of these findings by examining human tissue samples, the researchers expanded the project by analyzing other xenograft models of brain metastatic melanoma and breast cancer.

The study also provides many clues for identifying new biomarkers for early detection of brain metastasis. Today, brain cancer is typically already at an advanced stage when it is detected clinically. Nguyen’s lab is also looking at potential opportunities to use existing drugs against some of the targets suggested by the research.

Funding: The research was funded by Yale Lung and Skin Cancer SPORE grants and a grant from the Beatrice Kleinberg Neuwirth Fund.

What Shaking a Container Can Teach Us About Touch

Summary
The brain is a major site of relapse for several cancers, yet deciphering the mechanisms of brain metastasis remains a challenge because of the complexity of the brain tumor microenvironment (TME). To define the molecular landscape of brain metastasis from intact tissue in vivo, we employ an RNA-sequencing-based approach, which leverages the transcriptome of xenografts and distinguishes tumor cell and stromal gene expression with improved sensitivity and accuracy. Our data reveal shifts in epithelial and neuronal-like lineage programs in malignant cells as they adapt to the brain TME and the reciprocal neuroinflammatory response of the stroma. We identify several transcriptional hallmarks of metastasis that are specific to particular regions of the brain, induced across multiple tumor types, and confirmed in syngeneic models and patient biopsies. These data may serve as a resource for exploring mechanisms of TME co-adaptation within, as well as across, different subtypes of brain metastasis.