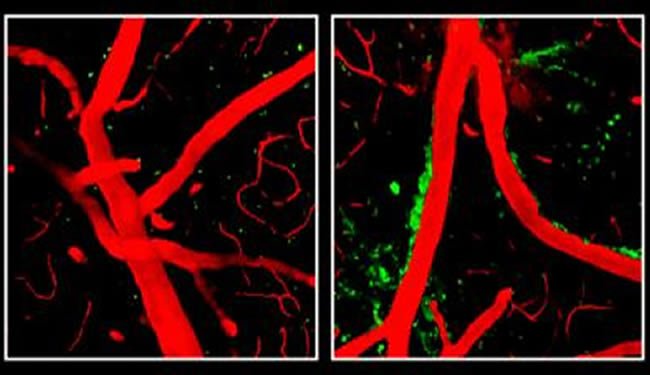 A gene variant responsible for vascular damage to the brain is a promising new target for drug therapy to fight Alzheimer’s disease and other neurodegenerative diseases, according to research published on May 16 in Nature.

Berislav Zlokovic, deputy director of the Zilkha Neurogenetic Institute at the Keck School of Medicine of USC, is the corresponding author on a study indicating that the gene variant apolipoprotein E4 (ApoE4), a major genetic risk factor for Alzheimer’s disease, causes inflammation of blood vessels in the brains of genetically engineered mice.

The gene variant allows entry of dangerous proteins that cause damage to the central nervous system. The research may be helpful for Alzheimer’s patients and individuals with other neurological disorders associated with ApoE4, such as stroke and Down syndrome.

“Understanding the role of ApoE4 in Alzheimer’s disease may be one of the most important avenues to a new therapy,” said Zlokovic, who also is professor and chair of the Department of Physiology and Biophysics at the Keck School. “Our study shows that ApoE4 triggers a cascade of events that damages the brain’s vascular system.”

Zlokovic conducted the research with first author Robert D. Bell, Ethan Winkler and other investigators from the University of Rochester.

Previous research has shown that a buildup of the toxic protein fragment beta amyloid constricts blood vessels in the brains of Alzheimer’s patients. Zlokovic’s team found that ApoE4 damages vessels independently of beta amyloid, leading to a breakdown of the blood-brain barrier, obstructing the flow of oxygen and nutrients into the brain and allowing accumulation in the brain of multiple neurotoxic products derived from the blood that normally are denied entry.

“Rather than trying to destroy amyloid plaques, this research indicates that therapies targeting the ApoE4 beta amyloid independent pathway may alleviate the development of neurodegenerative changes in the brain,” Zlokovic said.

Apolipoprotein E helps to regulate levels and distribution of cholesterol and other lipids within the body and exists in three variations.

Two of three variants, ApoE2 and ApoE3, protect against Alzheimer’s disease and heart disease or have no effect on either condition. The third variant, ApoE4, was seen to be ineffective in clearing cholesterol out of the body, but until now its role in the brain was not fully understood.

ApoE4 appears to weaken the blood-brain barrier by activating an inflammatory response in brain perivascular cells called pericytes, caused by an overabundance of an inflammatory molecule called cyclophilin A (CypA). CypA is controlled by ApoE2 and ApoE3 but is not affected by ApoE4, Zlokovic’s team discovered.

The mice engineered to produce ApoE4 had five times the amount of CypA in their systems, activating an enzyme that destroyed protein components of the blood-brain barrier and thereby weakening it.

“The Nature paper shows there is a beta amyloid-independent pathway of neuronal degeneration that depends on vascular damage primarily within brain capillary circulation and breakdown of the blood-brain barrier,” Zlokovic said. “This, in my opinion, is a very novel finding.”

The findings highlighted a growing awareness of a possible link between Alzheimer’s-type dementia and stroke, and they may open the door to therapies that improve vascular health in those predisposed to both conditions through high blood pressure, obesity and diabetes.