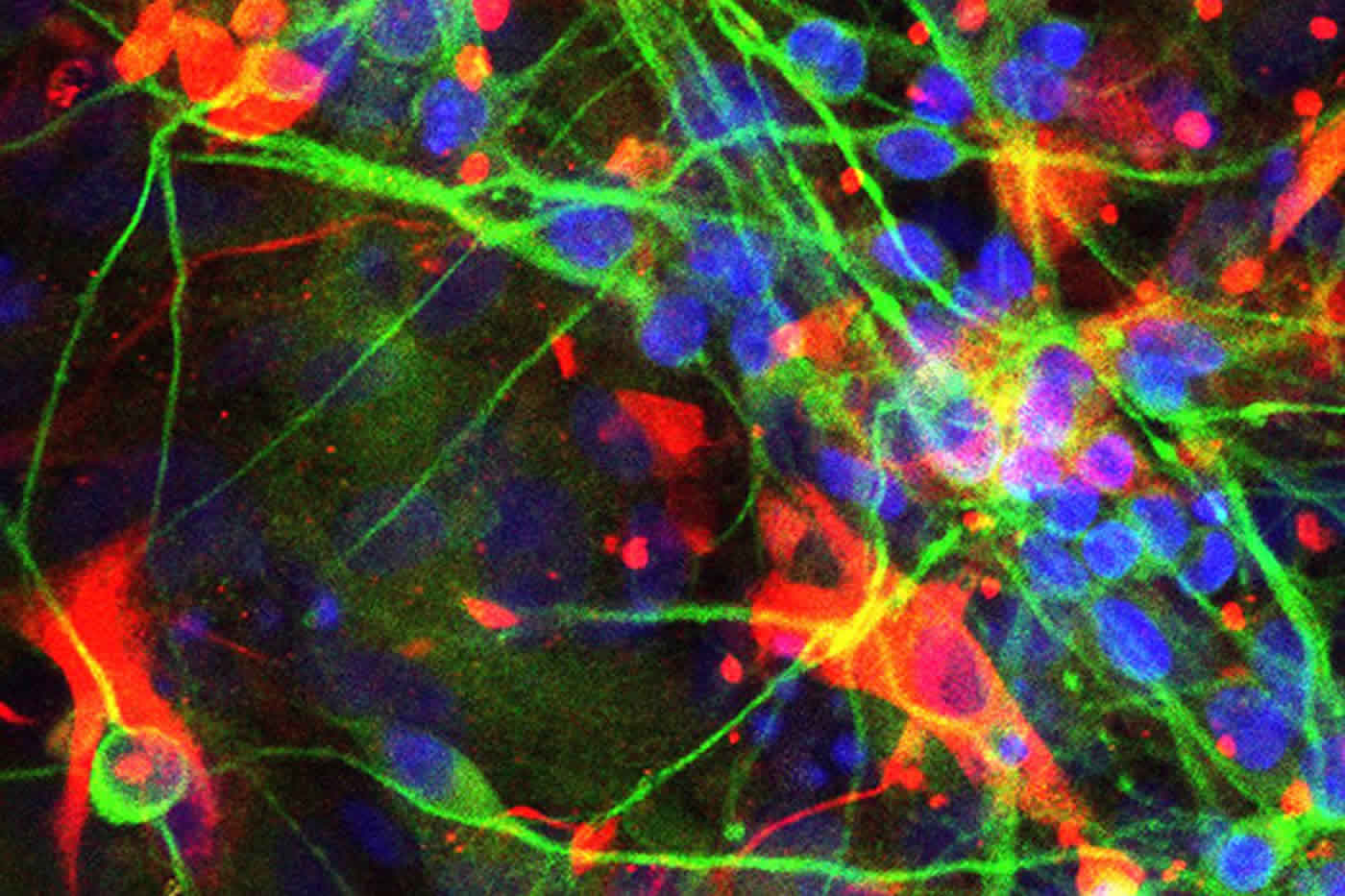 An image of the type of cells studied by Young-Pearse and colleagues shows human astrocytes (red) and neurons (green) derived from iPS cells. Credit: Sarah Sullivan.

Building on research reported last year, Harvard Stem Cell Institute (HSCI) researchers at Brigham and Women’s Hospital have succeeded in identifying the neurons that secrete the substance responsible for the plaques that build up in the brains of Alzheimer’s disease patients.

The work has been published in the Journal of Neuroscience.

Focusing on the form of the disease found in early onset Alzheimer’s, in the 2 percent of patients who develop the progressive dementia before age 65, Tracy Young-Pearse said she and colleagues now “can examine amyloid beta secretion at the single-cell level, and better understand the responses of individual cells to drugs.”

“I think that could be very valuable” in developing treatments, she said.

Young-Pearse, an assistant professor at Harvard Medical School (HMS), said that her team’s latest work, carried out in collaboration with J. Christopher Love of the Koch Institute for Integrative Cancer Research at Massachusetts Institute of Technology, is an example of the latest advances in, and importance of, the ability to study disease processes on the level of individual cells.

“Chris Love developed this great system for looking at individual immune system cells, such as B cells and T cells,” Young-Pearse said, and “he helped us apply his system to neuroscience. I’m really excited about being able to apply this to neurological disease.”

Both the miniaturization and scale of the research system are massive. A single slide has 86,000 wells in it, each of which can hold a single cell for analysis.

Secreted factors play a central role in normal and pathological processes in every tissue in the body. The brain is composed of a highly complex milieu of different cell types and few methods exist that can identify which individual cells in a complex mixture are secreting specific analytes. By identifying which cells are responsible, we can better understand neural physiology and pathophysiology, more readily identify the underlying pathways responsible for analyte production, and ultimately use this information to guide the development of novel therapeutic strategies that target the cell types of relevance. We present here a method for detecting analytes secreted from single human induced pluripotent stem cell (iPSC)-derived neural cells and have applied the method to measure amyloid β (Aβ) and soluble amyloid precursor protein-alpha (sAPPα), analytes central to Alzheimer’s disease pathogenesis. Through these studies, we have uncovered the dynamic range of secretion profiles of these analytes from single iPSC-derived neuronal and glial cells and have molecularly characterized subpopulations of these cells through immunostaining and gene expression analyses. In examining Aβ and sAPPα secretion from single cells, we were able to identify previously unappreciated complexities in the biology of APP cleavage that could not otherwise have been found by studying averaged responses over pools of cells. This technique can be readily adapted to the detection of other analytes secreted by neural cells, which would have the potential to open new perspectives into human CNS development and dysfunction.

SIGNIFICANCE STATEMENT We have established a technology that, for the first time, detects secreted analytes from single human neurons and astrocytes. We examine secretion of the Alzheimer’s disease-relevant factors amyloid β (Aβ) and soluble amyloid precursor protein-alpha (sAPPα) and present novel findings that could not have been observed without a single-cell analytical platform. First, we identify a previously unappreciated subpopulation that secretes high levels of Aβ in the absence of detectable sAPPα. Further, we show that multiple cell types secrete high levels of Aβ and sAPPα, but cells expressing GABAergic neuronal markers are overrepresented. Finally, we show that astrocytes are competent to secrete high levels of Aβ and therefore may be a significant contributor to Aβ accumulation in the brain.